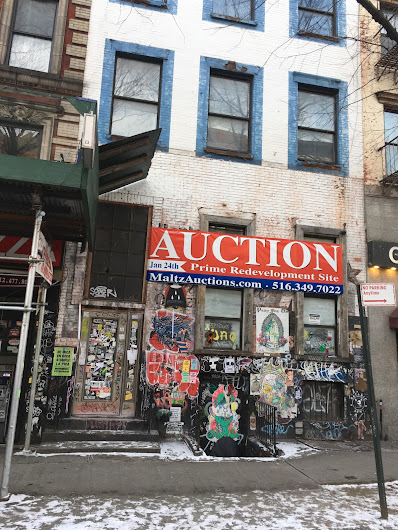 As I reported on Jan. 2, the potential development sites at 24 First Ave. (the onetime home of Lucky Cheng's) and 99-101 E. Second St. are headed to the auction block.

The bidding action begins today at 1 p.m. at the Hotel on Rivington. The minimum opening bid is $10 million. (Find more details at the auction site here.)

Landlord Carmar Development, LLC, had put the two-building parcel up for sale in February 2017. (We wrote about that here.) The L-shaped properties were seeking $26 million then.

Uri Marrache, a principal at Carmar Development, was reportedly at risk of defaulting on his $11 million loan against the vacant buildings.

As Crain's reported, while the bidding will start at $10 million, a winning offer must at least exceed the $11 million owed to the lender.

“The owner was behind with the lender on payments,” said Richard Maltz, chief executive of Maltz Auctions. “Going through an auction process like this allows a property owner that needs a quick exit to execute on a sale.” 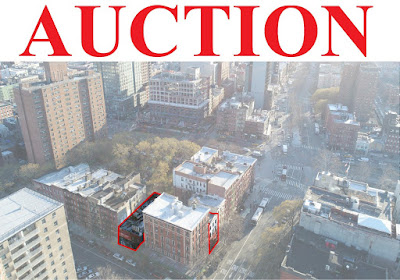 As for what a new landlord might be able to do here, we'll go back to the auction site:

Onetime home of Lucky Cheng's and adjacent property on the development market for $26 million
Building that housed Lucky Cheng's on 1st Avenue now on the auction block
Posted by Grieve at 4:40 AM

I am sure the new owner will build a new black glass tower, the first 2 floors dedicated to a New Lucky Cheng's. The rest of the building will be dedicated to the new Drag Queens,Cross Dressers and Trangendered Foundation (DQCDTF).

Great! Another opportunity for ICON to CON another bank into loaning them more money and launching another East Village Shit Show.

I am scraping under my couch..I know I must have at least part of that deposit under there...Will let you know later...

Wow, what a tax payment. Is that normal to be so high?

The annual real estate taxes are 142,000 and only going up and people wonder why the rents are so damn high.

That 142K in annual property taxes is tax-deductible as are utilities.

And no extra charge ... Get to hear the racket caused by 40 bikers hanging out in front of Spiegel Cafe on the corner! Looks like a nice quiet corner by day. By night, bikers park up 2nd St & !st Ave on both sides of your $10 million property, revving their bikes and circling the block until past midnight. If this is what your business likes, fantastic, because 9th Pct and elected deadbeat officials have done nothing about it after 2 years of complaints. Must be some good payoffs made to somebody.