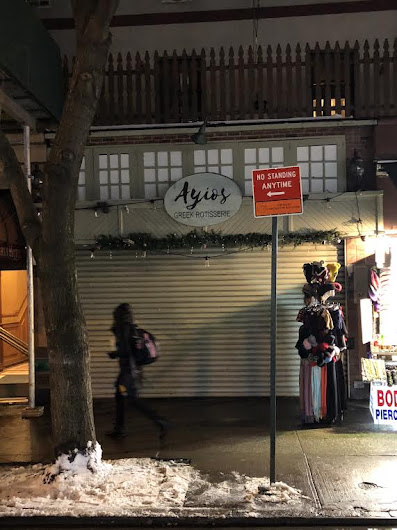 Word is spreading that the Greek restaurant at 2 St. Mark's Place at Third Avenue/Cooper Square has called it a day.

One of the workers in a nearby kiosk told Steven that Ayios closed at the end of 2017. The gate has been down during advertised business hours of late. There's nothing mentioning a closure on their website. There's no answer on the phone... while Yelp is reporting that they have closed... 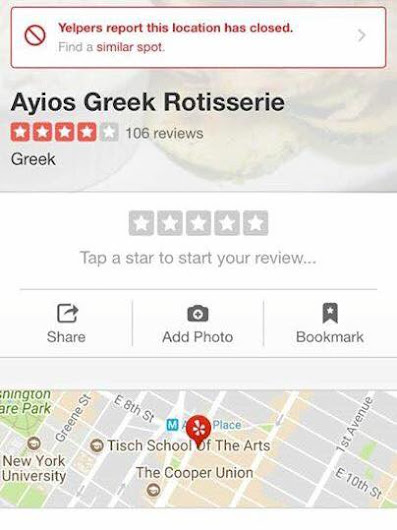 Ate there once a year ago. Food wasn't good.

Tried it again six months later, and only then to get out of torrential rain outside...it still wasn't good.

Hopefully the next business there will try making good food.

This is too bad. Went there several times and the food was great and affordable. Told all my friends to check it out, but I really think the location was not good. No one wants to walk on that disastrous block for a nice quiet meal.

I didn't even know they were there...That's how fast they come and go...

I never ate at Ayios, but it looked too upscale for the location.

this is such a bmmer, the food was fantastic, better yeros than souvlaki gr!

I liked them when they first opened. I gave them GOOD Yelp reviews. I wasnt happy when I went back a month later and they had TRIPLED their prices and had a different menu in the window that was given inside.

I liked their pork souvlaki. I've been there several times for lunch but there were never busy. At most they would have 3-4 tables, sometimes I was the only one there. I always wondered how they could stay open with such a huge space and no customers.

St. Marks is a small business death trap. You’re stupid to keep willing to fork over $20K+ per month on rent for these restaurant endeavors. Landlords laughing to the bank.

This is disappointing. I ate there a couple of times for lunch and dinner and was satisfied with the food for the price. It was also comfortable to eat there alone - no loud music or jostling drunkards. However, I often forgot about it because of the location: I generally avoid that stretch of St Marks Place. I think the location was wrong for this type of restaurant. Too bad, I liked the staff.

this is sad to hear. Their food was really delicious and very reasonably priced. It seemed to be under the everyone's radar.

When is Ray's Pizza closing? When that closes that'll be the final nail in the coffin for St.Mark's Place between Second and Third Avenues.

I went there one evening for dinner and paid for it dearly the next morning. My stomach was in knots. Not pretty.

The staff and ambience was nice though. St. Mark's though isn't a cool destination for restaurants though. Sorry to hear of their closing.

When this joint was about to open and its management was "renovating" the space -- replacing the Ale House abruptly, with little or no warning to its employees, who were likable and creative people (a singer, a coder or two, a film student, et al.) -- I looked in once and asked the manager what it was going to become, expressing some regret that the nabe was losing another unpretentious dive with great steak-and-eggs brunch specials on weekends. He sniffed, "This is going to be a place to get a *nice* meal," with all the hauteur we've seen too many times from market-rent invader types.

Ayios opened up, priced its food way too high, and offered nothing resembling a special or anything else a shallow-pocketed neighbor would take an interest in. I walk past it several times a day; I never once saw a capacity crowd in there (unlike the Ale House). I saw no reason to patronize the people who'd thrown some friends out of work. Nothing against gyros, but they shouldn't cost $15.95, or whatever it was.

I predicted this sniffy little place wouldn't make it two years and took to calling it Adios. An underestimate. Sixteen months, apparently. Kinda wish I'd placed some wagers on that.

Memo to whoever takes this space over: The EV still has plenty of people who like affordable food. Not everybody around here is the sort of insufferable yuppie d-bag whose self-absorbed arse Jeremiah Moss rightly kicks in his excellent book. We could use a place that ignores the yuppies and shows more respect for the neighborhood's history than for the almighty landlord's profit margin.

I know we can't turn the clock back to 1970. I know the likes of Warhol and Hendrix don't still hang out on the block. That doesn't mean everybody has to give in to the greedbags. How about just bringing back the Ale House?