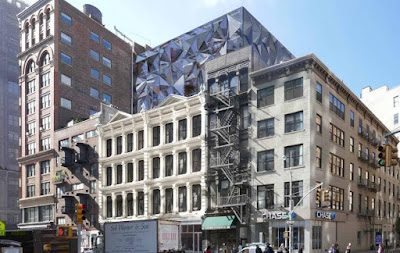 The Commission’s verdict followed hours of public testimony, where most people spoke in opposition to the project describing it as “overwhelming,” “grotesque,” and “atrocious,” among other descriptors.

But not everyone hated the proposal.

There were many who came out in support of the four-story rooftop addition too, most notably a number of art gallery owners, who praised the design and the aesthetic.

“This is a great homage to the existing building,” said Arnie Zimmerman, an art gallery owner.

“This impresses me in that the scale is exciting,” said Sally Wasserman, who lives in a building that neighbors the project.

Commissioner Michael Devonshire reportedly praised architect Jordan Rogove, though thought that this particular addition "may have been more appropriate as a de Kooning museum out in a field in East Hampton."

The LPC ultimately told the design team to return with a revised proposal, as Curbed reported.

This past November, the LPC voted to landmark the circa-1866 cast-iron buildings where artists Willem and Elaine de Kooning and Paul Jenkins, among others, lived and worked.

That decision spared the address from demolition. As previously reported, Quality Capital and Caerus Group bought the parcel in 2015 for $60 million. The deal reportedly included 30,000 square feet of air rights, which would be put to use for a 14-floor office building.

The Greenwich Village Society for Historic Preservation (GVSHP) had campaigned for more than 18 months to help preserve these buildings.

There's a proposed addition for the recently landmarked 827-831 Broadway
Posted by Grieve at 4:00 AM

Another victory for the PEOPLE! The barbarians may be at the gates... but we don't have to let them in...