[Updated] Report of a stabbing on 14th Street at 1st Avenue 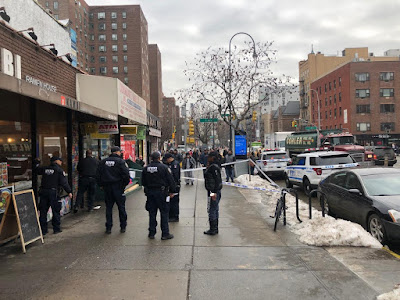 The NYPD is investigating a stabbing that took place this morning around 11:45 outside the Community Grocery & Candy on 14th Street just west of First Avenue.

There aren't many details at the moment. Per Patch:

The knifeman was wearing a black leather jacket and ran away after attacking the victim, an NYPD spokeswoman said. He has not been arrested.

Police said the injured man was transported to the hospital with injuries that were not believed to be life-threatening.

As of now, there isn't a description of the suspect or motive in the stabbing.

Town & Village has more on the story...

The two men had gotten into an argument inside a store that turned physical, police said, spilling out onto the street. At one point, one of the men took out a sharp object and slashed the 54-year-old victim. Police said both individuals are “known to the neighborhood,” though they don’t know the name of the suspect and haven’t arrested him.

The victim was taken to the hospital, where he was treated and released.

The suspect is described as Hispanic and about 6 ft. 2 inches tall and was wearing a long, leather coat.

It would be nice if the NYPD did their job and cleared out arr the Vagrants that have made that stretch their home. Since Dblasshole has been mayor, Police Enforcement has DECLINED considerably. That stretch of 14th is a timebomb.

Hey, that's my ramen spot. This is usually kind of a dodgy corner if you ask me.

Hot corner it is!

This area 14th and 1st has become very dodgy lately, almost to the extent of the late 70's early 80's. Everytime I go into McDonalds to get something to eat, there is always someone panhandling inside and outside...maybe that is reason enough for me not to eat at McDonalds. Very sad to see the neighborhood decline.

It is getting Dodgier by the day...wait till the Spring comes

That’s just another colorful neighborhood location you will never see featured in the StuyTown brochures. Even the annual arrival of the Christmas trees doesn’t seem to help. 15th Street and 1st is no picnic either, especially over by the Chase branch.

Live there for years.That corner's been a mess since way before DeBLassio. Just sayin.

When was the last timeanyone saw a policeman on foot in the EV other than going for a sandwich at the Japanese Deli on 2nd ave bet 5th and 4th? And even then they usually drive 6 blocks from 5th street to get there.

The free/$1 ATM inside the McDonald's is essentially unusable. One time I went to use it and I looked in through the window and some guy was leaning against the ATM -- not eating, or using it (the only two reasonable activities to be doing). I figured this guy was certainly going to do one of two things if I used it: ask for my money, or just grab it out of my hand. I wasn't happy about trudging somewhere else and incurring an ATM fee -- why is safety now $2.99 per transaction?

To echo the above, this corner/intersection has been a mess for a long time.

The South East side of 14th is a perfect recipe for chaos; subway entrance, bus stop, McD's, the Church.

The regulars; "No Shoes" has been living under a blanket for at least 5 years, and "old man" and his wheel chair seem to get picked up by an ambulance every other day. I hope these people can get help, but also get them off the street.

I use 13th Street and avoid that intersection like it's Chernobyl.

I live on this block and walk through this intersection (and on to Union Square) virtually every single day. Yes, the NW and SE corners in particular (both which have their regulars for sure, I can picture many of the faces as I write this)) can certainly be problematic and the conditions should be addressed in whatever way...but go easy on hyperbole; the stretch is not Chernobyl🤦🏼‍♂️

Prior to the arrival of the heavy winter there was a community of 12-15 vagrants hanging out by the side of the Vitamin Shop and before the Christmas trees came by the Grocery store across 14th street. They would sit on overturned newspaper/magazine stands and would recline all drunk and fucked up. During the Guiliani/Bloomberg era the cops would have done their job and made them UNCOMFORTABLE to hang out. Under this waste called Mayor, they are THRIVING.

Once the new subway entrance is done, the entire blocks in between 1st & A will be vagrantville, with above and underground station exits attracting a full community of issues. Gentrification's refuse.

As for the particular corner of 14th, DeBlasio is not to blame, the lazy Ninth Precinct is. The 9th is one of several precincts who think less crime means more play-and-hang time e.g. their event in the park last year. What other NYPD precinct has that? I'm sorry but tell me it's good they interact with the community and I'll tell you it's a bad optic when I see more of them in one place hanging out and playing games than doing their jobs.

If they wanted to they could easily clean up that part of 14th with a cop car there but they won't.

I am glad the good juicy rumors about this convenience store have not surfaced here. ;)

Nice to see that y'all want to strip these people of their constitutional rights just because they're unsightly and perhaps excessively fragrant.

@9:26. That’s why “fragrant” rhymes with “vagrant.” We are blessed with many fragrant vagrants in the East Village, especially on this colorful corner. From now on we can simply refer to all areas north of this corner as NoChe (North of Chernobyl) and all ares south as SoChe (South of Chernobyl).

To Jan 13 at 3:08am- DeBlasio is not a 'crimefighting mayor'. The reasons for the extreme drop in murders are due to the gentrification of NYC. Employed high income residents and well heeled tourists aren't hanging out on corners and selling drugs and joining gangs and committing murders. This story isn't about murders anyway. Its about quality of life issues which Bill D has no interest in dealing with. He has instructed the NYPD to ignore them. Are you aware that there was a big shakeup recently in the NYPD command? He has purged those who think cops should be active and aggressive and proactive. Since he has been re elected to his second and final term as Mayor he can fully implement his agenda. As far as bad optics are concerned, no cop wants to be on CNN or youtube and have their life ruined for doing their job. Those are the optics people are concerned about. A cop is more concerned about his/her life, pension, healthcare, and career than your inability to use a McDonalds atm . You have an anti cop mayor and media and you expect aggressive cops? Wake up.

As someone who lived in the east village through the Giuliani and Bloomberg era, I am mystified by the posters who claim those mayors cracked down on crusties and vagrants in the east village. The 9th precinct has permitted daylight heroin use and sidewalk encampments for well over 20 years. The bottom line is that it’s an unprofessional precinct full of lazy officers who can’t be bothered to get out of their cars and put on latex gloves to physically arrest, touch, or move the sizeable and aggressive vagrant population in this neighborhood. Its quite spectacular to blame deblasio, but not the commissioner, the precinct commander, or the local officers themselves for not doing their job.

Anon. 6:05pm: It's quite spectacular to make a blanket statement about an entire precinct and its officers🤷🏼‍♂️

Humorous and clueless comments here as expected. I thought people here missed the good ol days of violence and vagrants?

If the officers in this precinct were doing their job and cared about the residents’ quality of life, then there wouldn’t constantly be articles on this site about the 9th precinct, for example, ignoring 911 calls about the encampment in front of the Kenpo academy, and then taking no action when the crusties vandalize the place. Remind me of the last time 9th precinct officers cleared the southeast corner of Tompkins of junkies getting wasted, injecting drugs in broad daylight, and then tossing their used needles in the grass? Let’s be real: good police precincts who are responsive to resident concerns don’t have officers patrolling local blogs to defend their reputation instead of getting out of their cars and patrolling the streets.