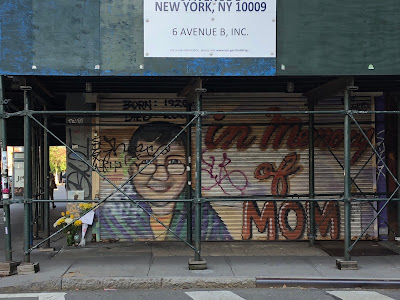 You may have seen the small memorial that recently arrived on the northwest corner of Houston and Avenue B... it's for Milton Ellison, a familiar presence (very likely asking for change) at this spot through the years ... 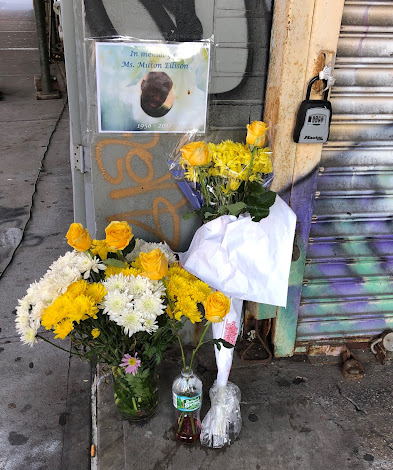 A few more people added flowers to the site since EVG reader Romy Saplicki first shared this photo back on Friday... 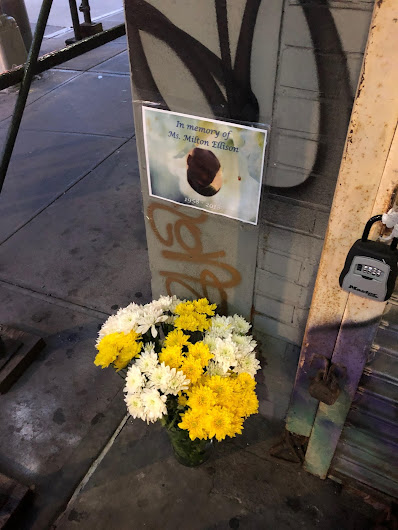 On Saturday, another EVG reader met one of Milton's siblings who was paying his respects on the corner. He said that his brother had died from lung disease.

Ellison was the focal point of a Page 1 article from April 1992 in The New York Times titled "Gauging Threat of Recalcitrant TB Patients."

Ellison, then 34 and homeless, had tuberculosis, and he "repeatedly failed" to take the medicine that he needed.

So last month health officials took a step that they said was the only way to protect Mr. Ellison and the people around him: They detained him in Orange County and took him to a hospital where he was guarded by sheriff's deputies and shackled by wrist and ankle to his bed.

Mr. Ellison said he grew up in the Greenpoint section of Brooklyn with four sisters and three brothers. He attended public school and spent one year in Brooklyn College studying liberal arts. He said he did not know how he got TB.

Doctors in Orange County said in court records that Mr. Ellison apparently tested positive for TB as a child but did not complete a nine-month preventive treatment with isoniazid or INH, the most common anti-tuberculosis drug. As an adult, he was treated for the disease as recently as last year but told doctors that he stopped taking medication after a week.

Over the last decade, Mr. Ellison has been in and out of psychiatric institutions, shelters and residential hotels. His misfortunes seemed tied to two unrelated events: He developed schizophrenia and his mother, with whom he lived, died. His father, a truck driver, had died earlier.

Ellison's brother told the reader that Milton had a room in subsidized housing on Pitt Street, and that he always had a good heart. 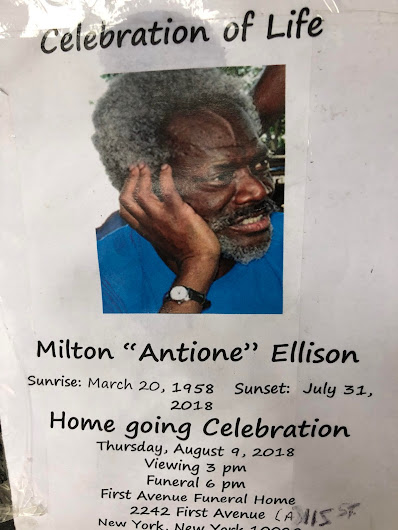 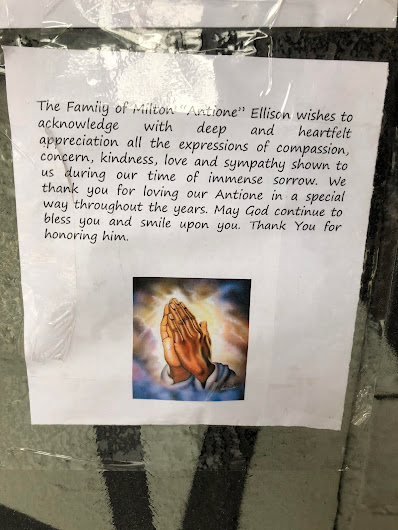 Thank you EV Grieve for publishing this. Reminds me that everyone, including those who beg in this, the most prosperous country on earth, are human too and have their own story, often tragic, and family, and those who love them.

@9:58am: Agree with you completely. These days, especially, it matters that we are reminded of our common humanity.

I loved that if you told Milton you couldnt SPARE ANY CHAAAANGE, he (usually) replied in a (fairly) normal voice, "Okay, thank you." As with most ppl hustlin coins to get by, just show them a lil respect. Theyll appreciate it. At the very least it lets them know ppl realize they exist. RIP, Milton. Condolences to his family n friends.

Thank you EVG for putting this story out there. His presence was one of a kind, he will be missed in the neighborhood. Rip Milton.

She(?) really was one of a kind. Thanks for writing this up.

I've known Milton for about 3 years. As the article above describes, Milton didn't have an easy life. But, in her own gentle way, Milton was steadfastly determined to live on her own terms. She had a truly uncommon resilience and degree of quiet fortitude that I always appreciated and admired. Thank you Milton, I'll miss you.

Milton was a male.

I knew Milton (Antione) most of my life. He more like family to me. When we were kids he was my bf. We lost contact over 25yrs ago and I've often thought about him and always prayed he was OK. I was so heartbroken and sad to find out that he passed away. R.I.P. my friend/brother. I'll always cherish the memories we shared growing up and I'll keep you in my heart forever...I love you Antione ❤