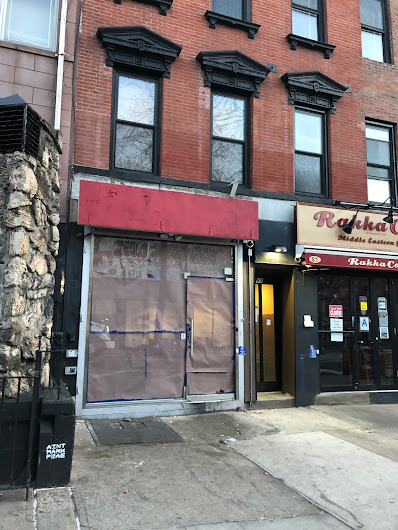 In a bit of a surprise, Xi'an Famous Foods has closed its outpost on St. Mark's Place near First Avenue.

There always seemed to be a crowd here for the shop's hand-pulled noodles, and it was the location where owner Jason Wang spent a lot of time as Xi'an continued to grow.

A note that arrived on the front door on Friday offered an explanation... turns out the lease was up, and Wang decided to move on... though it sounds as if a return to the East Village one day may be possible ... 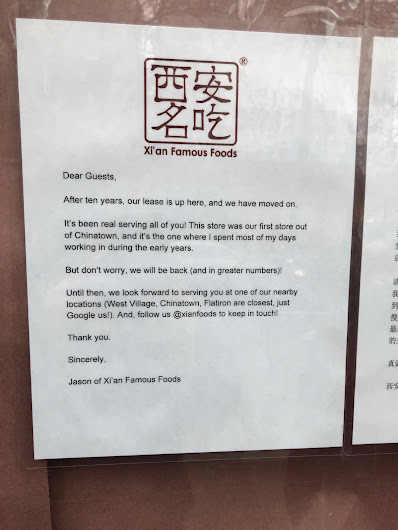 Wang also tried a sit-down Chinese restaurant called Biang! at 157 Second Ave. (a doomed location) that closed after 15 months back in 2017.

Meanwhile, there are still 14 other Xi'an Famous Foods in the city to enjoy.
Posted by Grieve at 4:30 AM

Not the first victim of dumpling overload that I would have chosen.

Nooo! I love this place! They know how to do spicy. Please return to the neighborhood!

I’m not surprised they didn’t renew the lease. It’s such a tiny space with almost nowhere to sit or wait on line. I’m sure they will return in a larger and more suitable space.

Hope they come back :( Their tofu - and noodles, and soups, and dumplings - was impeccable.

Their food is so good its a crime. Spicy in exactly all the right ways.

Surprising. Always busy. I cannot imagine many businesses doing better in this space.

Noooo, terrible news! There are a number of spots around the city now, but the one on St Marks is my go-to. Sad to see them go, hopefully they find another spot

Come to Avenue B!

Just when we need spicy noodles the most! Come back, Xian!!!!

I heard they are looking for a bigger space with seating and room for people to wait. They need more storage and a bigger prep area. This isn't about the rent or the business having problems. I would expect them to open in the area fairly quickly.

Sounds like they want a better space, maybe they outgrew it.

I loved their spicy food, however, it didn't love me back.

I love this place! Hope to see them back soon

Star Girl will probably be the first one to tag the empty storefront.

Went there many times after work to fulfill my cravings for their delicious spinach dumplings.
Hope they'll find a good spot nearby.

Before Xi'an, I'd say in the early-mid 90's, that used to be a sandwich place on what would be considered today artisanal, organic, etc. etc., but affordable and unpretentious. I remember it used to be staffed by college students and French expats. Anyone knows the name of it? Anyone, Bueller?