Because someone had to be an asshole 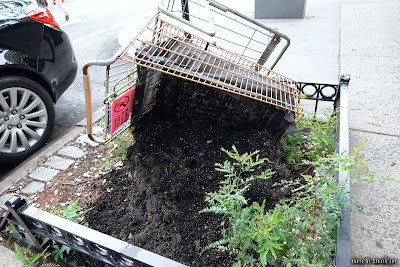 Someone overturned the Grocery Cart Garden on Fourth Street... which had survived more than a year here at the Bowery before the crowds returned...
Photos today by Stacie Joy... 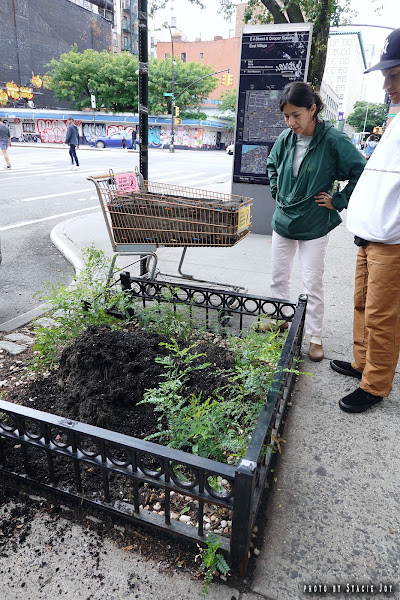 Updated:
Back in business... 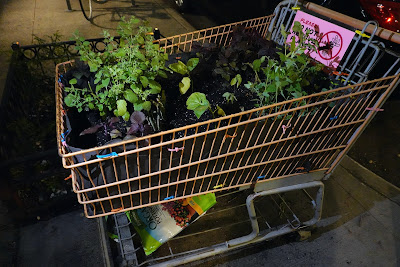 Email ThisBlogThis!Share to TwitterShare to FacebookShare to Pinterest
Labels: the grocery cart garden

Having a gorrila garden in the city, is one difficult and sometimes heartbreaking experience. One must be resilient. I've had my little garden for 12 years on First Ave. and & 7th St. It's doing great right now. Have faith, keep the good work. ox

I saw that. Shame on whoever did this. The plants in a shopping cart is such a lovely neighborhoody thing that brings a smile to my face whenever I pass by.

It marks the year is over, the entitled whirlpool of grotesque drunken gluttony is back.

The past year has been horrific. I personally know seven people who have died from Covid, and others who have survived it, yet I will miss the peace and tranquility that came with the lockdown. Civility has never been man’s strong suit, or respect for nature and any form of life, but the lockdown is the closest we will ever come to experiencing this city as it could be if only people behaved themselves.

You see the signs of this destructive antisocial behavior begin in childhood and grow from there while passing through StuyTown and East River Park I regularly see evil young children trying to destroy trees and rip off branches and the parents standing idly by. They attack squirrels and pigeons, throwing rocks and sticks at them, as dog owners let their animals chase down squirrels and laugh at the scared animals. These sociopaths are everywhere.

These are the same kids who grow up to march in SantaCon, storm the Capitol, refuse to be vaccinated or wear masks, elect politicians who think the teaching kids about slavery and racism is bad, and become Karens who threaten call the police on black people and tell brown skinned people to go back to their country.

I am conflating all of these antisocial behaviors because they all emanate from the same source: the reptilian mind of the id-driven, soulless, narcissist who equates everything with power and money, and sees everyone who is not like them as a threat, and who sees every social norm as a denial of their own personal freedom.

This racism and xenophobia has been with us since the founding of this nation. In the Declaration of Independence, the last of the 27 grievances listed against King George reveals the founders wanted to protect slavery from being abolished by the British, and wanted to exterminate the Native Americans in order to steal their land:

“He (King George) has excited domestic insurrections amongst us (this refers to insurrections by slaves to win their freedom), and has endeavored to bring on the inhabitants of our frontiers, the merciless Indian savages whose known rule of warfare, is an undistinguished destruction of all ages, sexes, and conditions.” via The Atlantic:

"In indicting the king for unleashing Indians on the “inhabitants of our frontiers,” the Declaration was not referring to a specific event but rather to the recent escalation of violence, which was caused by colonists invading Native lands west of the Appalachian Mountains. In response, a confederation of Senecas, Shawnees, Delawares, Ottawas, Cherokees, and other Native nations exercised a right of self-defense and attacked new colonial settlements. Although the Native nations had British support, they were acting on their own and not at the instigation of the Crown. Nonetheless, Thomas Jefferson, the Declaration’s primary drafter, hoped that by fanning the flames of settlers’ anti-Indian racism and implicating George III, he could ignite a general conflagration against the British in the West. In this way, the 27th grievance helped lay the foundation for an American nationalism that would demonize the continent’s indigenous people, especially when they resisted American aggressions."

The base rate fallacy - if one in a hundred thousand is a cart toppling asshole then when there are more people around is when that person will topple the cart. It doesn't mean neighborhood residence are any nicer or better behaved, just that there are fewer of them.

@11:48am: Thank you for a cogent and on-target comment. Kids these days seem like wild animals, and genuine child-rearing appears to be out-of-fashion; what we have instead is "Oh, Johnny/Janey, you are so beautiful, so smart, so clever, and you can do anything you want."

Is it then surprising that these kids grow up to literally DO ANYTHING they feel like doing? They don't see themselves as part of *society* - they just see themselves as all-important individuals whose every whim must be satisfied instantly.

Thanks, Giovanni. I always look forward to your observations. Today's is spot on. To the renegade gardeners: Keep on keeping on.

I am sure a security camera caught whoever did this on camera. If they want to get the images, we can all publicize them and ID the person or people.