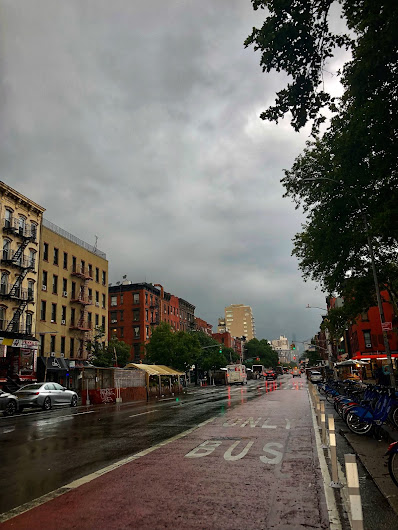 First Avenue between the downpours yesterday afternoon
• The Office of Nightlife at the NYC Mayor's Office of Media and Entertainment issues its first report, a 162-page document that includes almost two dozen recommendations for the future (Official release) ... the one-page section on potentially creating 24-hour entertainment districts in the city has received the most attention (Crain's New York ... The Associated Press)
• Gov. Cuomo says restaurants will be able to use sidewalks and streets for outdoor dining into mid-2022 (Gothamist)
• More people are returning to NYC, and finding apartments is getting difficult (NBC New York)
• ICYMI: Eric Adams wins the New York City Democratic mayoral primary (Reaction, analysis: City Limits ... The New Yorker ... Politico)
• About Mark Levine, the likely next Manhattan Borough President (Gotham Gazette)
• Rats are overwhelming the Baruch Houses on the Lower East Side (PIX11)
• An address book from 1997 that belonged to Jeffrey Epstein was originally found on an East Village sidewalk (Insider)
• The 40th anniversary of Blondie's "Rapture" video (The Post)
... and the free LES Community Music Fest set for East River Park this afternoon will now be at Nublu, 151 Avenue C between Ninth Street and 10th Street ... still free and from 3-7 p.m.

Hopefully the Cuomo thing is just a general allowance but that it is heavily regulated. It's ridiculous that when the emergency over that *some* restaurants still get to take over sidewalk space, the rats are crazy, the noise, you can't exit the sidewalk, etc. etc. it's a mess. There are way too many around EV and LES, it's a pain in the ass and they are taking advantage and more than doubling their capacity.

The city is in the pocket of the nightlife and real estate industries. The Nightlife is a free giveaway to bar owners. Of course they will thrive if you give them stuff for free and let them operate 24x7. What about other types of businesses that are closing up ? Who is helping them ? Eric Adams needs to abolish this Nighlife Mayor BS.

I've often tried to figure out on which East Village street the Rapture video exteriors were taped. The vid itself offers few clues however.

"Gov. Cuomo says restaurants will be able to use sidewalks and streets for outdoor dining into mid-2022"

Does ANYONE believe this is going to end in MID-2022? IMO, this is just a devious way to slide an entirely new set of structures into our lives without anyone in NYC ever voting on it.

If some of these places go up in flames & cause nearby structures to burn as well, we'll get to see all these entities kick the blame around, b/c everyone's going to say it's not THEIR fault or responsibility. Because nobody is in charge of anything anymore.

Yes, indeed, and for good reason! WHO (or, more specifically, whose bank account) is driving the idea that NYC should try to emulate Amsterdam, or any other city?

Is NYC being NYC somehow suddenly not enough? Is having bars open until 4am not sufficient for people to get drunk and party?

The idea of 24-hour entertainment "districts" is horrendous on every level.

But if we're going to try that, the very FIRST of these "entertainment district" locations should be directly outside Gracie Mansion, so the mayor can enjoy all that NYC can be, with round-the-clock drinking & noise.

The 2nd location can be directly in front of the "nightlife mayor's" residence, so SHE can also enjoy the excitement! I'm sure she's on board with that!

If it's such a great idea, it should really be universally available, even in the richest areas. I'm sure Park Avenue and Fifth Avenue would want some "24 hour entertainment" districts along there as well.

And I expect the following response from at least one person on here: "Sleep? Sleep is for the dead. If you need sleep, move to [fill in the midwestern city]."

You would think Cuomo is mayor

The rules for outdoor dining are so arbitrary. The restaurants on 12th Street like Raclette and Hearth that are on the same side of the street of the bike lane can't have dining in the street. But Numero20 has a whole dining setup in the street on First Avenue, and it sits right in the middle of a bike lane. And some restaurants have street dining sheds that go beyond their property line, and they get away with it, while others that did extend beyond their property line were told they had to make their spaces smaller. How is it that not every restaurant has to follow the rules? The whole situation is so unfair for many restaurants. Only some get to cash in while others don't.

Leave it to the EVGrumps to complain about extending a helping hand to the restaurant industry, which was one of the most badly bruised by the pandemic. We are all living with these sidewalk sheds and new dining rules... is it really that bad?

My old NYC dining out mantra was: "you can eat outside or you can eat great food, but never both". That's been completely changed now. Having a bite to eat and a drink outside on a nice summer night is wonderful.

Give these poor restaurant workers a break, they're our friends and neighbors! Many of them lived the better part of a year on near-zero income. Tip heavily, visit often and stop whining about a minor inconvenience!

While some additional outdoor dining might be pleasant and beneficial, perhaps on avenues where sidewalks are wider and noise doesn't ricochet between our buildings as if in a canyon, but the multitudes of dining sheds in our neighborhood's streets and on our sidewalks, especially our narrow residential side streets, obstruct pedestrian traffic and makes navigation even more difficult for wheelchair/walker accessibility as well as strollers - along with a host of other problems.

MyNiceGuy thank you for your service.

Completely agree with Mr Nice Guy! Nice to see others speaking out in favor of the benefits of outdoor dining sheds in NYC. The curmudgeons constantly complaining about them would be much better served focusing their energy on the specific issues they have with them instead of constantly trying to push for blanket abolition.

@mrniceguy can't speak for others but, it's not about the temporary fix during the pandemic. I think most people are reasonable and understanding about that. But it's getting to extend beyond it and continues to become worse.

@mrniceguy I'll also add - it's not a "minor inconvenience" it has a major effect on the neighborhoods and sidewalks/streets. And speaking of the restaurant workers, they don't like it either, they're doing extra work for nothing, and they are always in the way of pedestrians. Sure, it's nice to eat outside but there have always been regulated sidewalk cafes that paid for a little bit of space where appropriate. This is a different beast.

Question:
It's 95 degrees outside with 80% humidity...how many people will be utilizing outdoor dining when the restaurant has AC?

It's 30 degrees outside...how many people will be utilizing outdoor dining when the restaurant has HEAT?

The construction of endless plywood sidewalk shantytowns will continue until morale improves.

The outdoor dining structures have also made life for disabled people much harder, and very few people ever seem to think about that. If it's hard for you to get by on a sidewalk crowded with waiters, patrons, tables, etc. imagine how it is for wheelchair-bound people, people with walkers or canes, people who can't walk as quickly or maneuver as easily. Keeping restaurants alive is important and no one is denying that. I am still not comfortable eating indoors so I've eaten at a sidewalk structure a couple of times. I'm not entirely opposed. But if this does continue, the regulations need to be ironed out to account for the noise and space taken up, as well as cleaning all the extra trash that seems to linger accumulate around most of these structures.

Does calling everyone you disagree with a grump or curmudgeon make you feel better? People aren’t allowed to complain? Maybe you’re looking for a non-grieving blog.

The restaurant industry is one of the most glamorized in the country. Any criticism is met with “think of the workers”. Rent is back up in Manhattan and that must mean the city is back because no one else is getting a break. It’s time to start thinking about the future and begin a plan to remove the sheds.

When the sheds are removed, remove the parking spaces too. Then widen the sidewalks and make some of the spaces for dumpsters for the blocks that need them. Use this shift for the better of the neighborhood and be a good neighbor.

Easy, quick fix to part of the outdoor dining problem would be to not allow music in the outdoor area. This would solve a lot of the noise problem, and also make people less likely to yell over each other because it's so loud from the music. Not a big ask for the free space restaurants are getting.