[Updated]: E-cyclist killed by speeding hit-and-run driver on East Houston at Avenue B 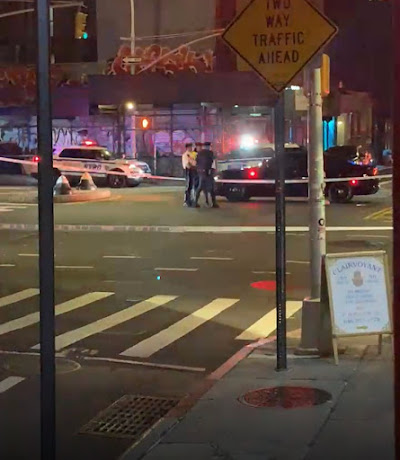 A 24-year-old man riding an e-bike was struck and killed in a hit-and-run collision last night on East Houston at the Clinton Street-Avenue B intersection.
Police sources told ABC 7 that the e-cyclist, identified as Borkot Ullah, was hit while attempting to cross East Houston — from Clinton to Avenue B — around 11 p.m.
The black Subaru Outback was traveling eastbound. The driver did not stop and was later seen heading northbound on the FDR, ABC 7 reports.
Streetsblog reports that Ullah would be the 14th cyclist or e-bike rider killed so far this year.
In previous years, EVG readers have expressed concerns about this intersection.
Updated 1 p.m.
Here's part of the coverage from Gothamist that highlights how dangerous the streets have become thanks to reckless drivers...

The deadly incidents come amid a spike in fatalities on New York City streets. At least 131 people have died in crashes so far this year, the highest total to-date since Mayor Bill de Blasio took office in 2014.
City officials have attributed the growing death toll to a nationwide increase in reckless drivers, who took advantage of empty streets at the height of the pandemic, and have kept up the deadly habit.
An increase in hit-and-run incidents, however, dates back to before the pandemic. According to Transportation Alternatives, there were 36,000 hit-and-run incidents in 2013, compared to an average of 45,000 in the last three years.

Updated 5 p.m.
Streetsblog has surveillance video of the collision.

A video from the scene showed clearly that the cyclist had the light and that the driver swerved around stopped traffic to run the red light and strike Ullah. After the crash, the driver is seen racing away at a high rate of speed as two cops in an unmarked police car — which was right behind the hit-and-run driver and might have been pursuing the driver before the crash — pulled over to check on the victim.

Streetsblog also has more about Ullah, who was a member of Desis Rising Up and Moving, an undocumented workers' rights group.
There is a GoFundMe campaign set up to help Borkot's family both here and in Bangladesh whom he supported financially through his food delivery work. 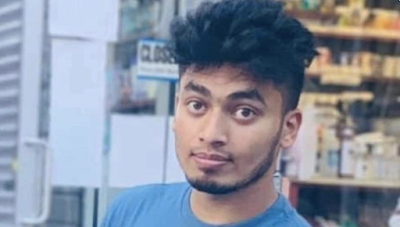 Top image via the Citizen app.
Posted by Grieve at 10:00 AM

Many more (MOSTLY Pedestrians) to be injured and maimed before the city Admins decide to do something/anything about this mess. They have lost control of the whole biking situation and refuse to do what is necessary including licensing the Bicyclists.

This is really sad.
Food delivery workers are completely exploited, work long hours and are underpaid.
Many customers ordering food are not patient and don’t tip well.

But as a pedestrian, I feel completely endangered by cyclists, particularly the “regular” cyclists, Citibikers, spandex, young cyclists who blow red lights, go the wrong way. Plus skateboarders and e t-scooters.
And due to Covid, so many more cyclists....

Yes cars are inherently more dangerous but most drivers follow the law.

The bike lane on Clinton is a mess .. Ubers and trucks always are parking in it and then toward Houston there is some construction happening which completely took away the bike lane.

@11:50 they're pulled into that because it's the side of the road. It's not a magical pathway. People have to be realistic.

This corner is tough and definitely has some challenges with people turning off both Clinton and Ave B. It's unclear to me from this reporting whether or not the biker had the right-of-way or not. Any idea? Either way, I know that I have almost been hit by cars turning onto Houston at this light when they aren't looking when I was in the crosswalk with the right of way. It feels like it would be a better idea to feed traffic northbound up Suffolk or Attorney so that B and Clinton don't run into each other here...

On articles like this, I am constantly amazed at the number of comments sharing personal stories about these big, bad cyclists. Let's look at the numbers here...

-In the latest report from NYC gov I could find, in collisions between cyclists and pedestrians, there are NO reported fatalities.
-IN 2020, 96 pedestrians and 24 cyclists died in motor vehicle collisions.
-And driving isn't even safe for drivers! 48 motorcyclists and 66 vehicle occupant died in collisions in 2020.

It's not too much of a stretch to see that a 2-ton hunk of metal is much more likely to kill you over a 38-pound ebike.

@2:24pm: Give it a rest. Cars & trucks will continue to exist. As will all manner of cyclists, some of whom should not be behind the wheel of ANYTHING that moves.

This is heartbreaking. I wonder like many on this thread if this POS driver will ever be caught let alone prosecuted. Many of these cyclists who deliver food are illegal and work off the books. They send money back home to their families and work against the stifling humidity and the biting cold during twelve hour shifts just to survive. I am so angry right now for many reasons. Pedestrians are a risk for the mundane task of crossing the street to go home after work. I've been almost hit by a few cyclists myself. But let's not throw the book at them entirely. What happened and has happened are senseless tragedies. Our city needs more CTVs. And for once, when do people take accountability for their actions? Ever heard of karma? RIP young man. What a crazy, selfish world we live in.

I am a cyclist. The nature of things are there will always be accidents. With that typed. Bikes, Ebikes, Motorized everythings are running wild going in every direction, now on the sidewalks. I got slammed the other night on Ave B & 10th Street by a biker turning from 10th street into the wrong lane and on his cell phone he ran right into me on my bike ( The only thing I was amazed at) was he did not blame me which made me somewhat keep my cool but I was furious. Lets stop blaming everyone else Over worked delivery people (though they maybe) is not an excuse to go on a motorized bike at 25mph the wrong way.

RIP Borkot. It is so sad to learn this young man died this way.

So many disgusting, uninformed comments. No, most drivers do not follow the law, and watch the surveillance video before you blame the innocent victim. So many privileged people in this neighborhood looking down on immigrant, dark-skinned, often undocumented workers who make this city run.

Why are people not talking about the victim here? Remember him? He is the one who died. Where is everyone's compassion? Someone just lost their life. Get a grip.

@7:31pm: Of course it is a tragedy for this young man to have lost his life so needlessly, so abruptly. I hope his family, friends and loved ones know that we in the community are very saddened by this terrible loss.

Any & all loss of life in such a situation is tragic, whether the cause is a car, a truck, a bike rider, a motor scooter, or whatever. It is ALWAYS a tragedy when someone dies in such an unexpected and horrible way as this. Everyone's life - from a tiny baby to an elderly person - is precious & valuable, and the loss of it should be sincerely mourned.

Thank you @anonymous 7:31pm - this is about someone who died! Put your petty gripes aside and don't comment unless it's to say what a terrible thing this is, and how the city needs to improve road safety for pedestrians.

More people will get killed and injured on Houston Street until the city’s Department of Transportation will redesign the street from a 3 lane highway to a slower, narrower city street. If the street design allows speeding there will always be speeding drivers. This city administration failed at doing that, hopefully the next one will do it differently.

The Department of Transportation’s job is to keep the streets in good repair and keep the traffic flow moving, not redesign the entire city.

It would seem they’re failing in both regards.

That video was INSANE. Subaru definitely ran the light while all other cars had stopped. Then an undercover cop car just happened to be right behind and respond immediately at the scene. How terrible. I know they will find this person and I hope they throw the book at them. Its a shame they couldn't have added a DUI on there too, because no one in their right mind would have pulled this crap

NYC has decided that the confluence of every kind of powered vehicle on the public streets is okay, despite all evidence of how hazardous it is.