A memorial chalk out Sunday in honor of Hash Halper, aka New York Romantic 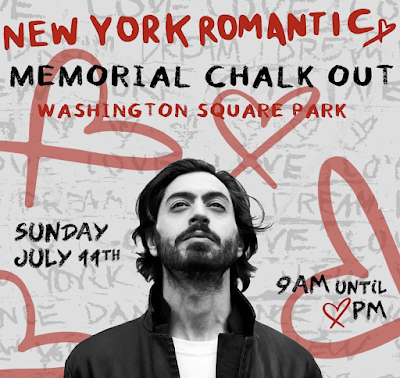 The family of Hash Halper is inviting his friends and followers to the New York Romantic Memorial Chalk Out in Washington Square Park on Sunday. The chalking will start at 9 a.m.
Halper, known as New York Romantic, was the artist who helped beautify streets by drawing chalk hearts on the sidewalks around the East Village and other parts of the city. He died on June 11. According to published reports, he took his own life by jumping off the Brooklyn Bridge. He was 41.
It was estimated that Halper drew over 300,000 chalk hearts in downtown NYC since 2014.
He told The New York Times in February 2018 that he draws the hearts "because he feels New York is losing its romance, with people holding phones instead of looking at each other."
Halper got his heart start in 2014 while working at Kossar's Bagels & Bialys on Grand Street. "The reason I started drawing hearts all over the city is because I fell in love with a woman."
Despite his desire to spread positivity, he harbored his own struggles, his family told The New York Times in an article published on July 4.
He was recently preparing for a solo exhibition of his work.

But, his family said, his paintings were destroyed during an altercation with someone who attacked him in his Lower East Side apartment. Rattled by the incident, he took to the streets and was seen two days later walking barefoot in SoHo.

"He didn't tell people that he was troubled because it was dissonant with his public persona," his brother Omkar Lewis said. "He was the heart guy, so he couldn't reveal his problems to the world, because he was the guy carrying other people's pain."

During Sunday's event, his family is also planning on raising awareness of mental health, homelessness and drug abuse.

If you or someone you know is at risk of suicide, please call the National Suicide Prevention Lifeline at 800-273-8255, text TALK to 741741 or visit SpeakingOfSuicide.com/resources.
Posted by Grieve at 6:00 AM