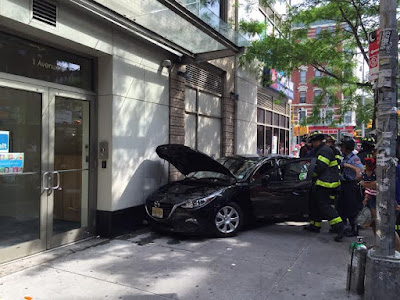 An EVG reader, who lives near East Houston and Avenue B/Clinton Street, has again expressed concerned about the intersection following a collision on July 4.

According to the reader, a Zipcar heading north on Clinton Street ran a light ... a westbound cab hit the car, sending the rental up onto the curb, hitting a pedestrian and then crashing into the Banco Popular at 1 Avenue B. 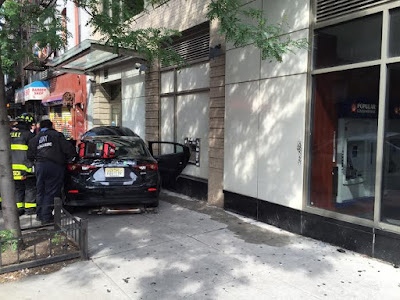 The reader said that the pedestrian, a male in his early 30s, sustained a leg injury. The passengers in the rental — a man, woman and three children — were all taken to the hospital. It wasn't believed that their injuries were serious.

Given the holiday and demands on the NYPD, it took officers 75 minutes to respond. Several witnesses stayed to give statements, though the driver of the cab left the scene. 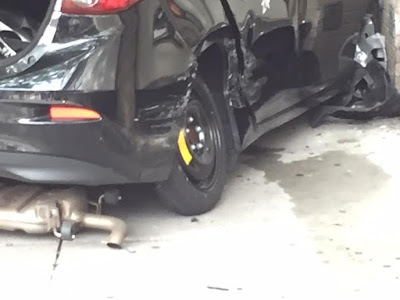 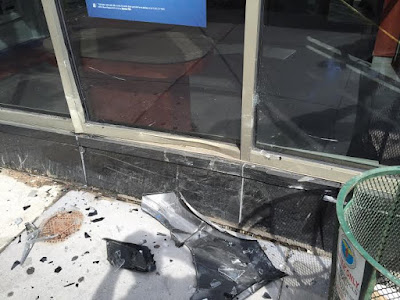 
"Only a handful of cars can make the right off the Williamsburg Bridge before the light changes ... and many try to run the light at Houston and Avenue B because they've been waiting 15 minutes to get from Delancey to Houston. On top of that, you've got people coming off the FDR westbound onto Houston still doing highway speeds.

This is an incredible dangerous intersection. [The city] should reverse the direction of Clinton Street."

Reader report: An assessment of the dangerous East Houston-Avenue B/Clinton Street intersection
Posted by Grieve at 4:30 AM

No one is coming off of FDR westbound still doing highway speeds. There is a 90 degree exit turn at a stop sign and several staggered traffic lights on Houston.

That's horrific. I was hit at that intersection by an impatient driver. I was crossing Houston walking north along Clinton, on the east side. One driver, waiting to turn from Clinton east onto Houston, yielded to me (as he should have), but another driver went around him and hit me... NYPD should do much more enforcement in that area.

Reversing the traffic on Clinton would do no one any good. But making it a pedestrian mall, with a two-way bike lane to and from the bridge, well, that's a great idea.

According to vision zero, the winner (loser) is actually 1st ave and 12th street: http://www.nycvzv.info/

As a resident by Houston and Clinton/Ave B intersection, I have seen some crazy things at that intersection.

That will free up space in the intersection where currently cars turning off of Clinton/Ave B have a difficult time seeing around other turning cars.

That Zipcar driver is lucky that's all that happened. Could very easily have caused fatalities both in and out of his rented car. Anyone who would try to beat a red light on that particular street/intersection is not very sharp and/or is out of their element i.e. an out of towner, someone who probably has no business driving around here.

What's truly sad is that the driver will walk away from this scott-free. Zipcar will probably give him some free credits for his inconvenience.

People running red lights should be ticketed and maybe a camera to auto ticket them. I see this all the time on Grand street with people trying to get to the bridge, they don't care about safety or the law.

Took the NYPD 75 minutes to respond? So July 4 is do whatever you want with no NYPD response?

Seriously wondering if zipcar guy was even issued so much as a moving violation citation. Doubt it.

It is very dangerous for a very long time..

I steer clear of zipcars whenever I see one on the road. The drivers tend to be the WORST, likely due to a lack of practice.

"NYPD should do much more enforcement in that area."

The NYPD enforcing laws on dangerous drivers? LOL. Run over a pedestrian or bicyclist and as long as you aren't high/drunk you'll get absolutely nothing.

Can't do anything to disturb the car owners!

IMO this July 4 collision doesn't highlight the dangerous intersection as much as it highlights the reckless self-centered driving of so many drivers and the freewheeling impunity they seem to enjoy in this city. If there is somebody you want to off, simply find a way to mow them down with your car on an NYC street. Long as you don't flee the scene, you're scott free. Just say you had a momentary medical issue or something. This is not a joke, it is the reality.

When traffic on Clinton was north to south back in the 1990's there was no such problem at the Houston corner. And Clinton was a much calmer street, before all the over priced restaurants (WD, etc.) completely destabilized the street and now has lead to over-development by million dollar condos. The real deadly corner at this end of Houston is at Avenue C, with traffic accidents on a very regular basis, and many quite catastrophic, mostly involving people going east on Houston turning left on to C, it's a long block from the light at D to C and cars coming west are frequently going way over the speed limit.

Um, if they reversed the direction of clinton street then the cars couldn't get to houston or fdr without going far out of the way and clogging up a street like essex. that's not a solution.

First I want all you people who wasn't in the car when the accident happen doesn't know what happened shouldn't judge it's not right. Thank God that everyone in the car are alive but suffering in pain, the driver of the zipcar was told by the traffic officer to go on and that's when the car came at full speed hit and ran not even stopping to check what happened.

No i didnt get free credits but the person who hit me is in jail for driving drunk and leaving the scene...thank u very much

I am the driver of the zip car and it did not take police 75 min to respond because the unit was on the corner when it happened. They were on scene right away....thank u very much