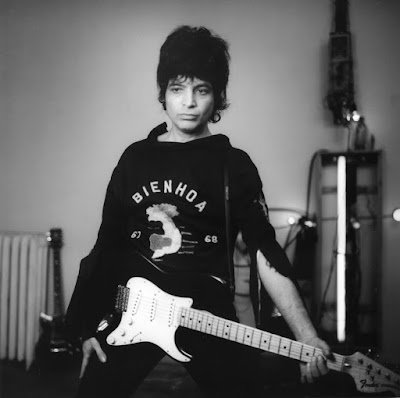 Alan Vega, one half of the seminal electronic duo Suicide, died yesterday. He was 78.

With profound sadness and a stillness that only news like this can bring, we regret to inform you that the great artist and creative force, Alan Vega has passed away.

Alan passed peacefully in his sleep last night, July 16. He was 78 years of age.

Alan was not only relentlessly creative, writing music and painting until the end, he was also startlingly unique. Along with Martin Rev, in the early 1970’s, they formed the two person avant band known as Suicide. Almost immediately, their incredible and unclassifiable music went against every possible grain. Their confrontational live performances, light-years before Punk Rock, are the stuff of legend. Their first, self-titled album is one of the single most challenging and noteworthy achievements in American music.

Alan Vega was the quintessential artist on every imaginable level. His entire life was devoted to outputting what his vision commanded of him.

One of the greatest aspects of Alan Vega was his unflinching adherence to the demands of his art. He only did what he wanted. Simply put, he lived to create. After decades of constant output, the world seemed to catch up with Alan and he was acknowledged as the groundbreaking creative individual he had been from the very start.

Alan’s life is a lesson of what it is to truly live for art. The work, the incredible amount of time required, the courage to keep seeing it and the strength to bring it forth—this was Alan Vega.

Alan is survived by his amazing family, wife Liz and son Dante. His incredible body of work, spanning five decades, will be with us forever.

As NME noted, the Jesus And Mary Chain, Bruce Springsteen, Thurston Moore, Nick Cave, New Order, Steve Albini, MIA and LCD Soundsystem are among the bands-musicians who have cited Suicide and Vega as an influence on their own music.

Early on, though, Vega, who was born in Bensonhurst, didn't think that people liked the band so much.

From a profile in Brooklyn magazine last December:

Vega, New York City punk icon, spent over a decade convinced that no one liked his band. “Suicide was hated by everybody. Everybody! It’s true. You should have seen the night we opened for The Ramones [at CBGBs],” he says. “They were late. Hilly [Kristal, CBGBs owner] was going nuts. So we had to go on… again! You should have heard the fuckin’ ‘Booooooooooooooooo.’ You couldn’t stop it, it was endless. Finally, the Ramones showed up, but Jesus Christ, we still had to do a few songs.”

He can laugh about it now, but for him and bandmate Martin Rev, the 70s were pretty rough. “They hated us from the day we started.” So he started swinging bicycle chains at their gigs to overtly menace the crowds unready to embrace Suicide’s brutally minimal, sorta terrifying music, because, fuck ‘em.

Rest in peace my friend - Alan Vega will be Dearly missed. Such a fucking true artist and beautiful person!!!

Thinking of Alan Vega today. Woke up to this picture floating around the web portending the bad news. Unlike anything I'd ever seen onstage when I shot this at CBGB in 1977. Always warm & supportive in person. My thoughts go out to his wife Liz & son Dante. Also Rev. So glad I saw them astound the crowd at Webster Hall last year. Dream Baby Dream. #photobygodlis

RIP #AlanVega You were beyond us. A future beyond any youtu.be/7WqOMPakGCg

God, what weird timing. I was out in Queens yesterday to see the Ramones exhibition before it closes, and my friend and I were looking at pics of other bands of the era, in some of which a much younger Alan Vega was featured, and we were discussing the times we had seen Suicide at CB's. So sorry to hear this. RIP, Alan, the group I hung with in those days thought your music was great.

As mentioned in NME, I can hear this band's influence on Bruce's Nebraska (especially "state trooper"), and undoubtedably in JAMC's Automatic

From Bensonhurst too. That explains the inherent toughness.

RIP to a wonder.

VERY cool no one pulled the age card on him back in the day considering he started Suicide at age 30-31 in 1970 and was 39 in 1977. I'd be curious to know if he wrote and recorded anything in his twenties.

You could seriously argue that Alan was the very first punk rocker since he was already 15-16 in '54 the year rock 'n' roll was born (unofficially), so he saw RNR from the very beginning and had the rest of the '50s and all of the '60s to produce Suicide. No punk rocker could say that in '77 as how many punks were 39 let alone in their thirties by then? Punk rockers, not new wavers or mainstream rockers.

Proof you're never too old to rock or start rockin!

Dreambaby on Ave B is named for the song by Suicide.