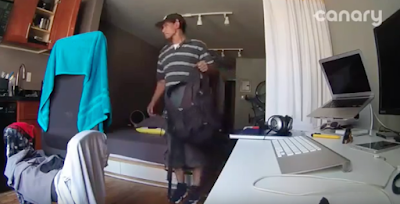 The NYPD is searching for a suspect they say broke into an apartment on 14th Street near Avenue A, ripping off some electronics as well as the home-security camera that captured him inside the residence.

According to police, the suspect picked the lock of an apartment on 14th Street near Avenue A and made off with $964 in electronics, including an iPad 4 and a Canary security camera which recorded the incident. The 29-year-old man who lived there was not home at the time of the break-in. The incident happened at 1:37 p.m. on July 22.

The man is very visible on the home security footage, below, and can be seen picking over the electronics on the man's desk before toppling the security camera. He is described as Hispanic, and was wearing a blue Yankees hat, green-striped polo shirt and gray cargo shorts at the time of the burglary.

Per Gothamist: "While the suspect stole the video camera, the footage was kept on the cloud. Thanks, Big Brother!"

Anyone with information that could help in the investigation is asked to call Crime Stoppers at 1-800-577-TIPS (8477). You may also submit tips online.
Posted by Grieve at 2:00 PM

Looks like someone is about to learn a painful lesson in the resilience of cloud-based surveillance systems. Stressful times for burglars, cameras everywhere.

The smart burglars know to cut the power at the circuit box first, that shuts down the router and then any internet connected security cameras with their own power can't broadcast to the cloud. This guy obviously didn't get the memo.

@ 6:07 PM
Yeah, you mean like the way those 'genius' bank burglars did. You know, the ones who just got nabbed today?
"Smart" and "burglar" is an oxymoron.

@6:07
That's a good point. Is there a brand that can pick up another signal if the 1st one fails? I can easily use a neighbor's wifi as a backup.

dude, you are soooo busted

also could someone please tell me how to set up one of these thingamabobs? like, I understand what a camera does, durr, but how do I set it up to send footage to the cloud? thanks in advance. now I will finally know which kitten to blame for knocking over the antique lamps

A) I have to get me one of those cameras

B) I'm surprised some of these petty thieves and street thugs continue to do this stuff, there are cameras EVERYWHERE.

There are apps on the App Store where you can set up an old cell phone as a security camera. You can record footage and have it send to the cloud if it detects motion, for example. I have my old iPhone 4 set up to do this.

This would be a good defense against intrusive landlords and slimy building contractors too.

@anonymous 11:42pm this is the camera that was used https://canary.is/

Even if you set up an old iPhone as a security camera, if it's streaming on your home WiFi then when the router goes down the video can't reach the cloud. If you set it up to use a neighbor's WiFI (or on LinkNYC) you might be able to avoid the smart burglar cutting the power problem. Using a trusted neighbor's WiFi is a better option, as LinkNYC will probably log you out after a certain amount of idle time, and you probably don't want some talented crusty hacker kid streaming your home security video onto the street kiosk screen.

I use this to keep the TSP crusties out of my apartment:

It's totally customizable (is that a word?) and works really well. So far no issues, but I have scared the hell out of my super a bunch of times.

If you're using a phone you can have it switch to data if wifi is off. Now I'm wondering if there's cameras with data built in as well.

Thanks Greg Cellamare. I've been looking for one under $100.