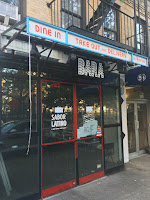 Last week we reported that the former BARA space on East First Street was undergoing renovations ... and reopening as a Latin-American restaurant. A tipster who lives on the block between First Avenue and Second Avenue believed the the owner of BARA was behind the new venture.

Turns out that this will be a second outpost for Esperanto ... the mainstay on Avenue C and Ninth Street is expanding with the opening of Esperanto Fonda, according to the Post.

Per the paper: "The Brazilian-inspired eatery is the latest from Dimitri Vlahakis, owner of Alice’s Arbor, La Gamelle and Summit Bar."

The menu will include empanadas with beef, shrimp and veggies ... as well as tacos, burritos and an Esperanto Bowl with rice, beans, pico de gallo, guacamole and meat.

BARA, a French/Japanese bar-restaurant, closed after service on June 11.
Posted by Grieve at 4:08 AM

Esperanto is excellent for their commitment to live music. In this post DJ age of vacuous background soundtracks to drinking they put musicians in their window. Food is good too.

Ethperanto is a great place to hang out. Wish them well here. Someone should make a heatmap of all the tacos in the city .. We'd be red hot.

dimitri is a good guy and been around the neighborhood for a long time. wish him well and please 1st st block assoc give him a full license i love the mojitos at esperanto

The original Esperanto is Brazilian but this Fonda one, judging by the menu, is Mexican