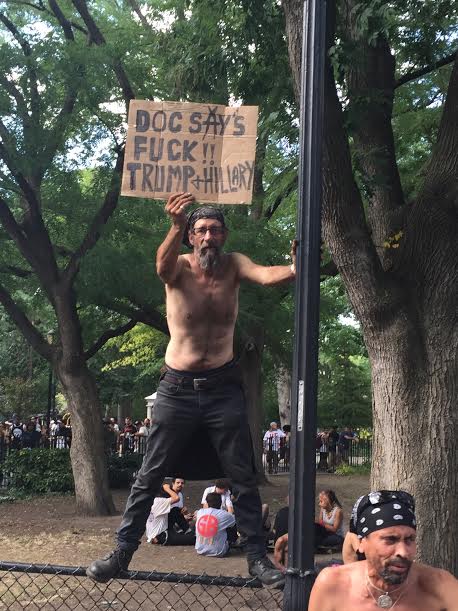 No trump!
Trump the Trumpinator....
See the page 1 article in the weekend Wall Street Journal
on No Trump caps. I showed it to the woman at Exit 9 on Ave. A,
so maybe they'll add it to their cool Trump poop bags.

Bill, anarchist, libertarian and opponent of the trumpinator

So who is he endorsing? Sanders?

Why do ugly people take off their clothes? Give us a break.

Punctuation can be so pivotal. This fellow could be saying Fuck!!! as in an exclamation of enthusiasm for all we know. Maybe he supports both Trump and Clinton. If I am being willfully obtuse here it's only because I am a stickler for proper usage.

I have to give this guy for staying punk rock past his 20s and being able to balance on that fence at his age. My knees wouldn't allow it!

Finally...a campaign poster I can agree with.

No, actually fuck you cuz that's a copout.

You vote or shut up. You vote for anyone but Trump or Clinton you're throwing away your vote and voting for Trump since most people will vote for Clinton.

Trump has to win Florida, Pennsylvania, and Ohio which Obama won twice to beat Clinton - not happening.

Gary Johnson will get more votes in these states than he got in 2012 thus Trump will lose votes to him.

The media and Sanders Scum (I define as those who will vote for Trump by not voting for Clinton) makes Clinton out to be some kind of demoness and this dumb fuck buys into it.