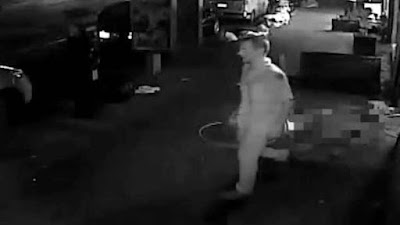 The suspect grabbed the 37 year-old female victim's buttocks, according to investigators.

When she confronted him about the incident, he punched her in the face numerous times. The suspect fled northbound on 1 Avenue.

The woman was taken to a hospital, where she was reported in stable condition.

ABC-7 has more footage of the attack here.

I'm curious how they could tell he was white by looking at him. Race and racial identity are social constructs. Do dark shirts and blue jeans advertise whiteness perhaps?

Uh...perhaps the victim provided a description? Let's not make everything a race thing.

I'll be on the lookout.

I agree, let's not make this a race thing since we all know that race doesn't exist. That's why I'm curious to how they know this perpetrator is white. We don't often see so-called races being mentioned when the perpetrators belong to certain other non-existent races, so this really just struck me as odd. How can you describe whiteness? It's a social construct, you know, like being a Mormon. Can you tell someone is a Mormon just be looking at them?

Calm down 11:46AM, you're going to give yourself an aneurysm. I didn't know they made knightly armor for blokes your size anymore.

There is a guy in the back looks like he is taping it but not helping. Society today sucks.

Another guy who thinks cuz he's tall and heavy he can rip someone's head off.

There's The Napoleonic Complex and then there's The Goliath Complex.

3. Best to let people with guns catch this guy.

If you see him attacking someone of course try to stop him.

The liberal NYC media NEVER mentions race unless they think its a white person. We dont have to make everything a race thing- it already is. Guarantee I'll read about crimes this weekend and the race of the suspect won't be mentioned.

Goliath complex. Very true. Goliaths bones break just like everyone elses. Goliath prob doesn't know how to fight. He thinks his size intimidates people. 6 1 205 isnt big bro. A smaller guy with a weapon or proper training will put you in the ER or morgue will no problem. Call the cops if you see this guy. Leave the street justice for action stars.