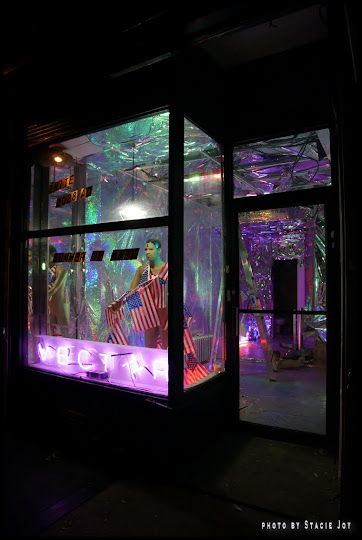 You may have noticed the transformation in recent weeks of the empty storefront at 199 E. Third St. between Avenue A and Avenue B... the space is the new home of Vector Gallery, formerly on Clinton Street, East Broadway ... and Los Angeles.

Founder JJ Brine has billed his space the Official Gallery of Satan. His previous storefront galleries featured items such as glow-in-the-dark paintings of Charles Manson and various performance-art theatrics. (Brine's gallery also made headlines for its vagina phone charger at Art Basel in Miami Beach in 2014.)

Opening night here is Aug. 18. Per the invite: "Featuring new installations by Crown Prince of Hell JJ Brine and sermons/performances by Ministers of The Vectorian Government."

But until then Brine seems to be adding items daily to the photogenic storefront.

And speaking of the devil, at least in landlord form, this space last housed Snack Dragon, which closed in October 2014 after a reported large rent increase courtesy of landlord Steve Croman.

Thanks to Stacie Joy for the photo earlier this month!

Someone has a trust fund. What a waste

Mang, has the readership of this blog changed over the years. A sentence containing "....vagina phone charger" in it, and NObody takes a crack at it for 8 hours.....sad.

Their provocative space on East Broadway had its window smashed by an irate person, who could have been Hebrew, Muslim, Buddhist or Christian. Their exhibits were sure to piss EVERYONE off!!

I've enjoyed the weird displays, but not sure how or why they're paying the Croman rent on this space. And with the brunch people and the now very trashy/touristy Mama's and No Malice I'm getting sick of people on our residential block.

Is the first exhibition at Satan's Gallery dedicated to NYC real estate developers, since they're basically His minions anyway?

May he be consumed by fire in HELL.

Oh please! What a tosser!