Empire Biscuit appears to be toast on Avenue A 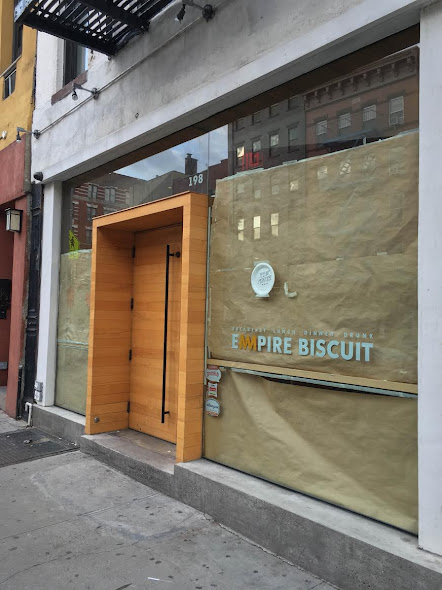 The rather chipper "peelin' potatoes" signage on a paper plate has remained up in the papered-over Empire Biscuit window since early March.

The quick-serve biscuiteers at 198 Avenue A between 12th Street and 13th Street have only been open a few days this year... dating back to January when ownership announced reduced hours.

Empire Biscuit owner Jonathan Price told us that they would reopen in March after doing some maintenance work. That never happened. (The reopening — not sure about the maintenance.)

The storefront remains dormant... on July 1, a reader thought that the space had been emptied out... 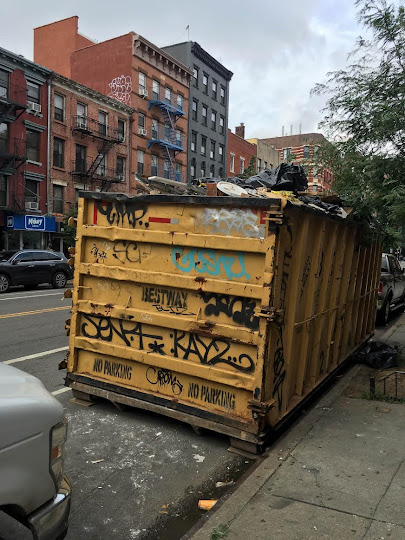 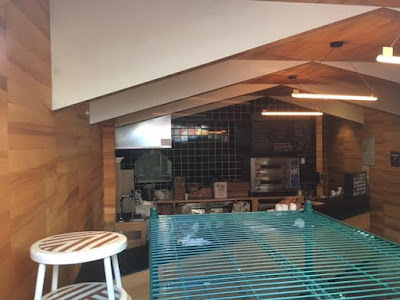 And now, a summons appeared on the front door yesterday (but dated from May) ... from the Civil Court of the City of New York ... looks as if the plaintiff, City Waste Services of New York, is looking to collect a debt... 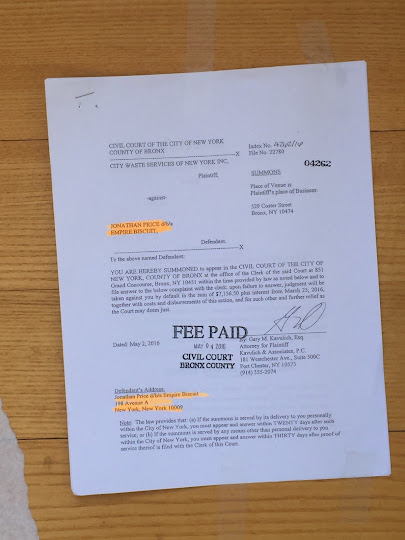 ...apparently there was legalese from Con Ed on the door last week.

Empire Biscuit opened in the fall of 2013.

I AM SHOCKED, SHOCKED I SAY

Where's Beardo and Perma-grin?! Do we need OFFICER TUBBS to issue a biscuit BOLO?! Have they been kidnapped? Did they go West for a wood waxing retreat? Are THEY in charge of the new Astor Place?!?!? Goddamit! I need some answers!!!!

I don't feel bad for them. They pissed me off from the start with their whole we cater to "drunks" thing. Nice way to turn off a neighborhood of potential customers--the people who could have sustained your business. See where it got you? Nowhere but in debt.

Great. Just great. I have biscuit needs that demand to be filled so where does this leave me? I'm chaining myself to their locked door until they open back up. I don't care if it takes all day I'll be there protesting for about 10 minutes.

According to online records. ConEd filed a claim against Empire Biscuit 2 weeks ago for non-payment. That's what happens when you leave the lights on 24x7 for months at a time even though you're closed 24x7. Their Facebook page still says "Always Open." I wonder how many drunks stumbled over there late at night, only to find it closed. As the saying goes, the lights are on but nobody's home.

Where's all the media hype now? The least they could do is let someone else who needs the space to rent the store, but this fiasco has never been about "the community." It was always about trying to seem cooler than everyone else while making a ton of money. They even sold "high fives" as part of their Kickstarter campaign, a move that would make Donald Trump proud. And look at how that worked out.

The polar opposite of Empire Biscuit is Superiority Burger. Working out at a space half their size, they turn out a consistently good product and have built a solid following. They haven't hired any bouncers to generate PR, or hype themselves with cute tag lines. they just focus on making great food.

If they ever make a TV movie they should call it "The Empire Strikes Out."
Breakfast. Lunch. Dinner. Drunk. Gone.

They were clueless and arrogant. Then again the EV is now full of those; Empire BS shouldve attracted them. Pride comes before the fall.

I believe the long lines -- friends and family, temps and actors they hired during their first few days of opening --that "required" a security guard,and the ladies crying over dropped biscuits are now at that designer bagel place.

A business failed that was opened with the sole intention of getting laid? How did this happen?

I think what we're seeing here is signs that point to the end of the beardo/hipster...uh...'movement'. After years of entitled bohemianism it looks like the page is turning. Everybody have a good time pretending to be cool? Good, now maybe we can focus on some ideas that have a little depth to them...

That's the way the biscuit crumbles. Never ate there, and considering what a biscuit whore I am, that really says something. The first mention made of them on this blog elicited a comment from me along the lines of "I'll be living there". As time went on and I saw what kind of place it was going to be, my mind changed, and I never once darkened their doorstep. Way to go, guys - tailor your appeal to drunk transients who have the loyalty of a rabid stoat, and ignore the long-term clientele who could have kept you afloat. More beard than brains.

So have they been living inside there this whole time or what? Otherwise wouldnt it be cheaper to just break the lease and bail?

Gojira, I also love biscuits so I tried this place once, early on. The biscuit was bad, with an off, faintly rancid taste. Blech! I didn't even finish it.

Old Devil Moon was such a fun place. Like eating in a restaurant Rob Zombie designed.

OMIGOD Gojira,
Did you have to mention Old Devil Moon?
What a chill place that was. At one point in the late '90's I was lucky enough to live across the street from them.

Hey biscuit boys! Don't let the door hit your ass on the way out!

9:58 AM: Don't know if Superiority Burger is the polar opposite. They had a lot of media coverage when they opened, which I presume was the work of a skilled PR firm. But I agree that Superiority Burger was able to walk the walk, with good food at a good price, and service with a smile.

Old Devil Moon was one of my favorite places, and one reason, Anon. 12:07, was cos of their biscuits (thanks for the review of Empire's pallid offerings, by the way - sounds nasty, not a word I ordinarily associate with luscious l'il hockey picks of dough). I still have the ODM delivery menu, and every now and then I look at it and remember and sigh...

I still get an erection when i think of the biscuits at Old devil Moon. What a place and what a biscuit and what a hardon.

People behind Superioriry Burger are legitimate restaurant industry folks who worked for Del Posto, an acclaimed fine dining establishment. The biscuits bozos are just wanna be hipsters who have no clue how to run a food business in a such competitive market like EV.

This place would deliver to you at 7:00am. Very handy just after my son was born. Not amazing, but not bad food. I'll miss them for sure.

What makes Superiority Burger the polar opposite of Empire Biscuit is that they lived up the the hype and Empire Biscuit never did.. Empire Biscuit announced on Day 1 that they would soon be open 24 hours, and on Day 2 they shut down as soon as they ran out of flour and lard. They kept shutting down erratically, for days at a time, always with some cute but weird excuse, the last one being they were busy "peelin' potatoes."

Superiority Burger announced they would be open for limited days and hours, gradually expanding their hours, and they stuck to their schedule. They kept to a limited menu, with each item living up to their name.

Empire kept adding and subtracting menu items, and had too many strange topping combinations that made no sense. They were sometimes stingy wth toppings, making customers feel ripped off. They had a tip request policy that seemed designed to shame customers into tipping, even though it was just a fast-food style counter-service biscuit joint with limited seating.

Every new business has some glitches to work out, but Empire obviously did not have the operational experience to know how to fix their problems, while Superiority did. Empire should have launched as a food truck, or spent more time figuring out how to make biscuits that aren't as hard as hockey pucks, and make them profitably. When one of the two founders leaves after a year to take a job at Twitter on the West Coast, you know that there's a big problem. At least he didn't have to sit around for six months in a closed store, peelin' potatoes.

By appearances this wasn't much of a labor of love, which I think any successful food operation needs to be at its core.

Of course they were paying the rent. Do you know of any landlord that lets you not pay rent for 6 months? Otherwise there would have been an eviction notice posted by now. Knowing these guys they probably pre-paid the rent, which is why they didn't have cash to pay their bills and left the place sitting there with the lights on all this time.

No doubt the landlord will soon be coming to take the back the space, and then the next foodie concept will soon be on the way, like Tompkins Square Tater Tots or Shaved Ice Cream Dumplings.

I'm just relieved to know that a phony southern biqueteria that served animal torture items like fois gras and had the nerve to try to make #Lardlove a trending topic has no place in this neighborhood. Next!

Gojira leave poor stoats out of this :)

Wishing them the best of luck on their next journey. We moved into our current space and were renovating about the same time they opened up. They all seemed like decent, friendly people and were good neighbors in the few times we met. Running a small business is no easy task, especially here in the EV.