Earlier this month, multiple tipsters told us that the closed-for-now Dahlia's on Second Avenue and Fifth Street will return as a quick-serve restaurant specializing in salads.

And yesterday, the signage arrived for 100% Healthy Blend... 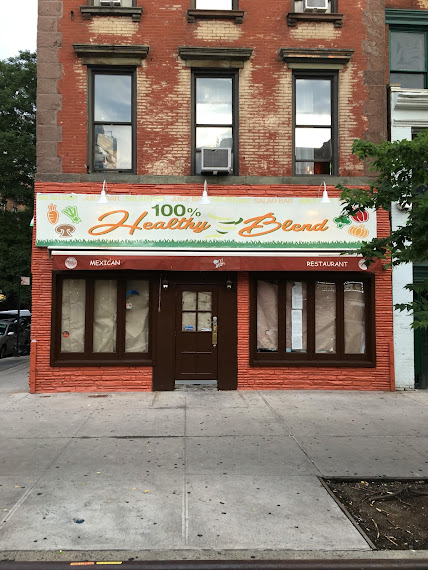 The sign notes both a salad bar and a juice bar on the premises. As we understand it, the owners of Dahlia's are also behind this new venture.

As you likely recall, the SLA temporarily suspended Dahlia's liquor license after serving a reported 50 minors one night in January. The Mexican restaurant then closed in May. 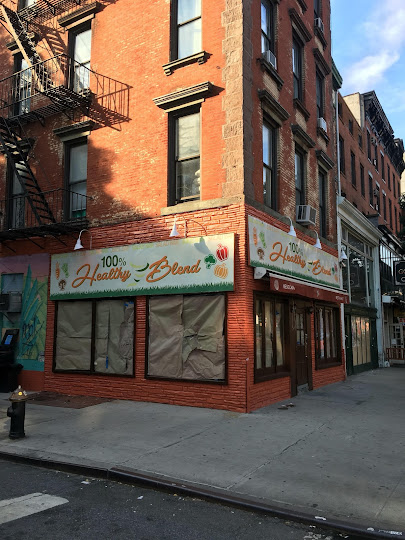 More about the underage drinking bust at Dahlia's; plus, reaction from NYU students

RUMOR: The Dahlia's space will be converted into a salad bar
Posted by Grieve at 4:30 AM

Email ThisBlogThis!Share to TwitterShare to FacebookShare to Pinterest
Labels: Dahlia's

Another juice bar. Aside from a mega-club, I would say that's a worst case scenario for me. Hope all those who can afford them enjoy their $8 organic, free-range, locally-sourced, soy-based kale shakes! :(

If you don't like it, don't go. Must everything be something to complain about? It's a big city, room for everyone.

Finally! A juice 'n salad bar! Now if I could just find a coffee shop.

site (or commenters) are getting very complain-y on here. used to be funny/witty griping now mainly bitter. and always complaining: it's also not a bar or a bank or a duane reade or a a 7-11 or a fancy coffee place or a chain-y coffee place.
(well, it is, two bars--smoothies and salads, but not the alcohol kind)
It's not a fishmonger (popular complaint)either.
It might be a pokestop!!

Dahlia's was awful in nearly every way. I welcome some salad!

I'm just posting in admiration of the flawless, correct and rare m-dash use in the headline.

@marjorie - that's not an em dash. That's a hyphen,which is shorter than an em dash, and it's where a hyphen ought to be. So, you're correct that it's correct, but identified it incorrectly.

Don't know if I can put one in here—if that's longer than the hy-phen, then that's an em dash. There's a wiki article
"Dashes" that is fascinating reading.

cmon people... Dahlia's suuuucked. A salad joint, if done right, would be wonderful.

hyphen, en-dash (a teeny bit longer) and em-dash (longest) some of my favorite punctuation marks for their subtle but key different uses.

The food at Dahlia's sucked, but it wasn't the worst place to sit outside with a frozen drink and watch people walk by. Of course, with their liquor license gone they might as well try to have some decent food instead.

Hey 1:03pm someone can not like it and say they don't, ok? I would imagine he/she wouldn't go.

Enjoy your $8 kale shake you millenial shit who thinks no one can ever speak his/her mind or against anything because your entire generation never spoke and never will speak up about or against anything cuz you've been coddled, pampered, and told you're wonderful, so why say something else sucks?

The millenial is the absolute most useless generation in American outside of ones who become doctors, lawyers, and other people who provide services for all people not proprietors of another expensive fruit juice bar catering to dipshits who could make their own smoothies with a $20 Hamilton Beach blender.

A salad/juice venue is better than another liquor license bar or an Olive Garden. And as to coffee, an Argentinian Coffee Shop is opening in one of the "Shoppes on East Fifth Street" around the corner.