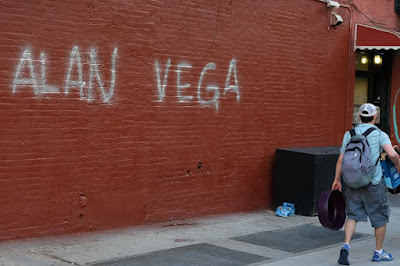 [Photo this morning by Derek Berg]

Someone spray-painted Alan Vega's name on the wall here on Sixth Street at First Avenue...as mentioned previously, the co-founder of influential electronic and proto-punk band Suicide died Saturday. He was 78.

From The New York Times:

Suicide, particularly in its early years, was as much a provocation as a concert act. Formed in 1970, it was one of the first bands to bill themselves as “punk music.” With Martin Rev playing loud, insistently repetitive riffs on keyboards and drum machines and Mr. Vega crooning, chanting, muttering and howling his lyrics about insanity, mayhem and death, Suicide fiercely polarized its audiences.

In the trashy, fertile downtown New York City arts world of the early 1970s, Suicide performed at the Mercer Arts Center, Max’s Kansas City and CBGB as well as at art galleries. The band was initially a trio, including a guitarist, but by 1972 it was just Mr. Vega and Mr. Rev.

Suicide was pretty much a one trick pony. Ghost Rider was their only hit. Unlike other OTPs, they stayed around long after their expiration date.

Sweet tribute. This is what graffiti is all about motherfuckers. Or should be. Putting a meaningful coherent thought out there in the world.

...like any artist, writer, musician, it's about a lifetime of work. "Hits" are for baseball stats. #RIP Alan Vega.

Quantifying Suicide's impact by calculating how many hits they had is like scrutinizing Jesus' skills as a carpenter.

Alex in nyc , you hit the nail on the head. RIP Alan Vega

Uh, well, since Suicide wasn't the product of a virgin birth and the incarnation of God on earth, and because none of Jesus-as-carpenter's handicrafts exist to this day (because fictional characters don't saw wood) ... no.