[Updated] Reader report: Rumors about the new Astor Place and the Alamo 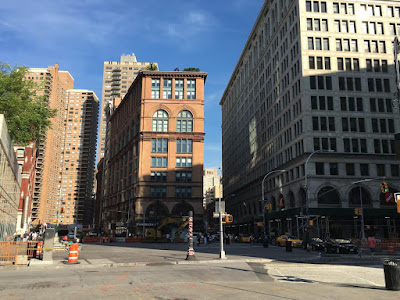 [On Friday] I was told by someone who works for Village Alliance that, when eventually complete, the new Astor Place will have a variety of food vendors, outdoor tables and chairs, and some type of lighting scheme. There's a large electrical box on the northeast corner of Chase that will power all of this. The Village Alliance and some type of committee at the Sculpture of Living building decide who these food vendors are and, in general, decide what takes place in the area. 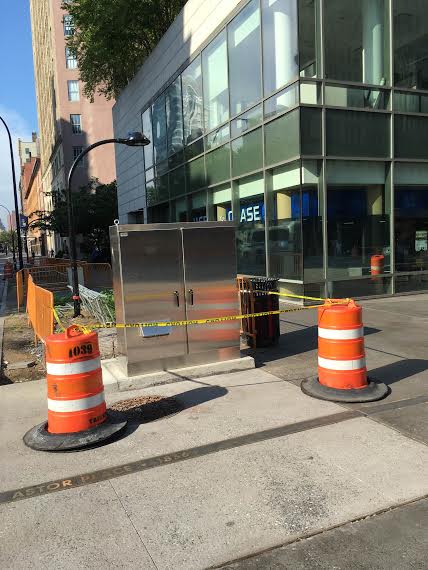 One bit of news I found shocking is that they have allegedly altered The Alamo sculpture so it will now include some type of lighting.

According to the Village Alliance employee the sculpture will also rotate on its own now as he said people have hurt their backs trying to spin it. Personally, I find it unethical to alter an artist's work to make it appear more like a theme park attraction.

The Alamo had an announced return date of June 22, but the city pushed it back to August.

Workers removed the Alamo for safekeeping for the duration of the $16 million capital improvement project on Nov. 25, 2014.

William Kelley, executive director of the Village Alliance, shared the following with us:

The Alamo sculpture should return in August, and it is exactly the same as it was before. There are no lights and the spinning mechanism is human powered, just like before. It received a thorough cleaning and coating to protect it from the weather and will return in good shape.

Also coming in August, there will be bistro tables, chairs and umbrellas for use by the public, much like you see in other plazas around the city.

Finally, there will be a single food concession in the north and south plaza spaces at Astor Place (not around Cooper Square or points south) pursuant to the license agreement with NYCDOT. No other vending will be allowed on the plazas.

Looking at a cube-less (still) Astor Place
Posted by Grieve at 4:26 AM

many years ago i saw a rendering of tables with umbrellas running along the western side of "their" park. i think it was in their "commnuity" affairs office.
funny that they should have such an office.

their "new" plan fits in perfectly.
wait till they make it for students and staff only.

I assume $15 million of the $16 million went to line some fat contractors pockets since it has taken years to complete about three months worth of actual work.

Spin on it's own??? Surely that can't be. I had the privilege to meet and spend an afternoon with Mr Rosenthal before he died. It would be despicable to alter his work like that.

The Alamo should transform into a food truck and back again.

Why don't we ditch the cube for something useful, say a guillotine.

Hurt their backs spinning the cube? Don't spin it if you can't - that was the charm of it - sometimes a bunch of kids would try and a man would go over and help them and everyone would love it... Geez....Can there be anything more indicative of the infantilization of the people heading into the EV?!

Jesus Christ - must we fussy the shit out of everything?!? Just leave it be.

Next thing we know there's gonna be an open-air street"art" festival held there on every Friday or Saturday night of the month with food trucks, yoga under the starts and DJ's "spinning"techno funk to the beat of the rotating Alamo.

The redevelopment of Astor Place was always about a food court. That's why there are so few plantings! God, what a bait and switch. All that concrete was for something and it wasn't for a park like experience. The sad state of affairs in the city, in the world is that we monetize everything. We can't let anything alone without trying to make a nickel off it. And we complain about the likes of Kmart, Walgreens, CVS. The
real enemy is the community Board. They put a price on public space.

Why don't we just make the Statue of Liberty animated so she can bob her heard and wave her torch at passing tourists? Who the hell thinks that making the cube rotate will do anything but make it look like a Macy's Chrstmas window display? People will push it anyway and break the motor the day they install it. Or maybe will they put a fence around it to prevent people from touching it? Welcome to the East Village, exit through the gift shop.

Wow, more tourist-ification of NYC - b/c tourists can't possibly be expected to comprehend the cube unless someone *makes it* spin for them. I'm sure NYC looks to most tourists like a gigantic State Fair.

NYC is starting to look like one giant outdoor shopping mall, with Generica chain stores that can be found all over the place.

This failure of a project has made the area so harsh. Because of the large trees they cut down, there's no relief from sun, rain, wind, etc. On Saturday my options were get sun burned, wind whipped, or a dirt facial from the various roads left ripped up in disarray. It used to be a place people could enjoy, now it's a barren corporate wasteland with a few blocks of stone to sit on.

I am in complete agreement with Anon. 11:21 AM. Bring on the tumbrels!

A Cinnabon would be nice. Who's with me?

I like the open space. How often do you get to walk in New York without obstructions? Hasn't anyone ever been to public squares in Italy or Spain?

So most of what this employee said was accurate minus the spinning cube.

The barren, gun barrel gray plaza is NOTHING like Italy or Spain. Dresden after the bombing on the other hand...

what you described is what goes on every day at Union Square, the yoga that is. It's like this city is funding this demented zeitgeist and franchising it like Mcdonalds, soon this will be on every greenstreets spot.

New york has become the place of amenities and events for the wealthy, young entitled alcoholics and frivolous spending tourists. It's not for commuting, working or even relaxing anymore. And this massive sidewalk waste of space in a high vehicular traffic area is the death knell for what was once considered daily routines for average NORMAL people.

There is in fact a law that does not allow the alteration of art committed to public spaces.

The update(explanation) just proves the point about our dishonest politicians and guardians of our trust. SHAME! SHAME ON THEM! All we have to do is look to Union Square. It's a nightmare of shabby low-end events. That will be Cooper. ANd of course... this will be followed by law suits and indictments.

As I recall, Mud was promised a kiosk when the Mud Truck was displaced by the construction. Let's see if the "committee" follows through...

I really dislike this trend of corporate events in public spaces. It lacks an organic authenticity with regards to who lives in our individual neighborhoods and what we have to offer. I'd rather see artists, musicians, street performers, and other representations of a real community and not one that lululemon or SoulCycle fabricates in a boardroom. Although at this point, anything that distracts from the repulsive cement beach that is now Astor Place is better than nothing I suppose.

I demand an Orange Julius!

This "public space" is another vehicle of intermittent privitzation of public spaces i.e. build a public space then make it private whenever the phone rings.