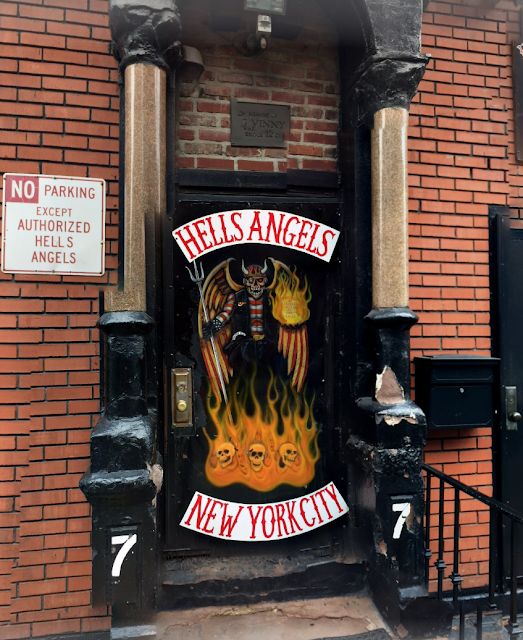 A member of the Hells Angels was arrested after allegedly waving a gun and chasing a man away from the club's East Third Street clubhouse, the Daily News reported.

The incident apparently took place last night around 10 outside the club between First Avenue and Second Avenue.

Police arrested Jose Brito, 28, and charged him with criminal possession of a firearm and menacing. Officers on the scene recovered the bat but not the gun.

It was not clear what prompted the gun waving and chasing.
Posted by Grieve at 4:59 PM

The victim was probably trying to remove those cones to park his car.

Anonymous 5.06,
Or perhaps the victim permitted his dog to pee on one of aforementioned cones.

he told the biker to feel the bern.

Considering the fact that the police installed eyes in the sky pointing at their clubhouse, seems even more insane!!! Check out the cameras on the light post in front of 86 east 3rd.

I DON'T THINK THIS IS THE FIRST INCIDENT....TWO WEEKENDS AGO THERE WERE ABOUT 6 COPS BY STARBUCKS AND APPARENTLY POSTED AT THAT SPOT ALL DAY. ASKED WHAT WAS UP....SITUATION WITH HELLS ANGEL'S REGARDING A SHOOTING. H.A. HAVE BEEN SITTING ON EITHER SIDE OF THE STREET RECENTLY. AND VERY AGGRESSIVE.

I've seen many tourists taking selfies in front of their clubhouse or group photos sitting on their bench. I've explained many times this is not a Disney attraction but their private clubhouse and their signs re: private property are serious. It wouldn't surprise me if the guy was chasing away a tourist - who will just go home with a "cool" NY story.

8:34 PM: Curious why you feel the need to explain that it is a private clubhouse. Are tourists attempting to enter the clubhouse? Thee sidewalk is public property.

One time I was walking my aunts dog and we walked down the street where their club is. Out of all the places the dog decided to just start pooping on the sidewalk out front. What can you do? The dog doesn't know better. I felt terribly anxious and felt the weight of every camera turned on me. I was really happy that it was very easy to clean up. I also figured that at the very least they wouldn't mess with a tall blonde either.

No way. I live across the street and they are probably more relaxed about the tourists than most of the people that comment on this blog.

Why you are explaining to tourists the reason for a bench is beyond me, but so be it.

Beyond all of that, this was not some club member mad at a French tourist.

Their signs notwithstanding, "private property" does not, of course, limit ones right to take any photos on a public street.

I've never understood how they get away with the parking and cones thing. I'd like to have my own staked out spot to park too--who wouldn't?

I wish the Hells Angels would chase more people down the street with guns, particularly the Calebs with their Thistle smoothies and Mac Book pros.

Me too. Bring back the old clubhouse! I miss hanging out at front with the few I knew and being terrified of them at the same time. It's freaking nice in that place.

NOTORIOUS - Funnily enough, I've seen at least one or two of the HAs drinking green smoothies/juices on more than one occasion. :)

"Out of all the places the dog decided to just start pooping on the sidewalk out front. What can you do? The dog doesn't know better."

Ever heard the term Curb Your Dog? It's called training. That's what you can do. If you are walking a dog you should be in control of that dog. You should know better.

I remember when having them on the block was protection from any other crap happening. I also remember their old 4th of July firework displays they lit from 3rd st. (Until that one poor bystander was killed by flying shrapnel). That era of HA as community member seems to have ended.

Now I get them following me as I walk my dog, "It better not sh*t here, man!" I mean, WTF? Way to act like the folks you all make fun of here.

Even they've changed for the worse.

I agree with @9:56AM
There seem to be a new "generation" of HA, who are more aggressive and threatening. Last year, I was walking past their "clubhouse" with my new born son in a stroller, and, as a I past, got exaggerated negative "dam yuppie" or "fu" sneers from two of the three guys standing near their bikes. I have no doubt that, twenty years ago, one or more might havesaid, "congratulations" or something like that. There's more a midwestern biker-crime gang feel going on today, than the neighborhood Hells Angeles vibe I remember in the past.

What's the difference between signs that say, "No Parking Unless Official Hells Angeles" and "No Parking Except for Condo Residents?"

Trixie, my dog walks with her leash in her mouth but I can't pick where she pops a squat, nor do I care enough to train her. I pick it up and anyone who is offended can get lost. The whole 'curbing' notion is ridiculous.

I live a block from these guys, and the real menace is their revving engines at all hours of the day and night - trying to show off how loud their little bikes are, as if anyone cared. I imagine they assume people will turn their heads and see a rebel with a gorgeous chrome Harley, when in fact what people see is a wheezing geezer with grey hair, a belly, and an obnoxious toy. These people need to save up some money and buy mufflers.

The HA member arrested is 28. Not exactly a geezer.

Trixie: "curb your dog" means to have your dog go on the sidewalk, not lawn or landscaping, and clean it up as thisiskdo mentioned. It does not mean training them to poop or not to on command.

I lived on 3rd st a block away from them as a child in the 80s-90s and they were great to the ppl in their neighborhood. If anything it felt a little safer knowing they were there looking out. They would wave to kids ad they drove by. I moved some yrs ago and dont know what theyve been like since. Maybe its not a HA thing per se but rather a sign of the times in general. There were always neighborhood ppl looking out for one anotherr no matter age, sex, race,religion. Even if ppl didnt get along, they knew their neighbors and looked out for them if need be and all came together to stabd up for their common ground, their neighborhood. Its sad that in today's world thats not always the case anymore.

I live in the building right next door and the revving of the engines past midnight some nights (even weeknights) is intolerable. Has anyone ever tried to get the local precinct involved?