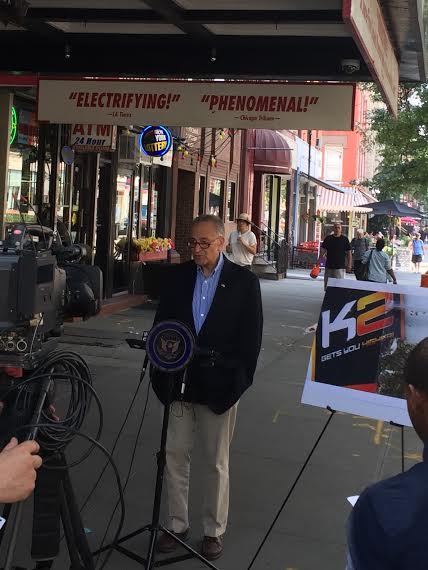 New York Sen. Chuck Schumer held a press conference this afternoon outside the Orpheum Theater on Second Avenue to discuss his proposed drug legislation in the aftermath of the recent K2 mass overdose in Bed-Stuy.

Here's more from the Associated Press:

Schumer is pushing legislation to add 22 substances to the federal list of banned drugs following a mass overdose in Brooklyn last week that sent 33 people to hospitals.

Schumer's bill would ban substances, including three derivatives of fentanyl, a synthetic opioid, and 19 others that are used in efforts to mimic the main psychoactive ingredient of marijuana.

He says that since 2015, more than 6,000 synthetic drug-related emergency department visits in New York City and two confirmed deaths have been blamed on K2.

An aide told EVG correspondent Steven that Schumer picked the East Village for the press conference because it's a diverse neighborhood and K2 is a problem affecting everyone.

Thx @SenSchumer for staging K2 press conference in the drug infested East Village. Hopefully it'll send a message to realtors to stay away!

Meanwhile, millions of young people are addicted to Pokémon Go and no one is doing a damn thing about it.

The "Electrifying!" and "Phenomenal!" signs in the background might have been considered in terms of the optics.

Giovanni: Rest assured if anyone's going to do something about Pokemon Go it's going to be Schumer. The problem is there just aren't enough Tuesdays in a month...

Schumer was, has been and always will be a man of the people, by the people and for the people. Pay attention people...he is one of the good guys.

Hopefully he took a good look around and saw just how disgustingly dirty the neighborhood was, is but hopefully not always will be. It shouldn't be too hard to notice you are standing among trash. Maybe he will get some extra garbage cans out there to start with before trashing the Sanitation Dept.

Yeah because Pokemon is clearly tantamount to junkies ODing on k2.

Schumer was, has been and always will be a man of the people, by the people and for the people. Pay attention people...he is one of the good guys.

Unfortunately, I still find myself calling him "Schumato."

An odd location for this press conference. He should have had it in or near Tompkins where we see the effects of the drug trade daily.