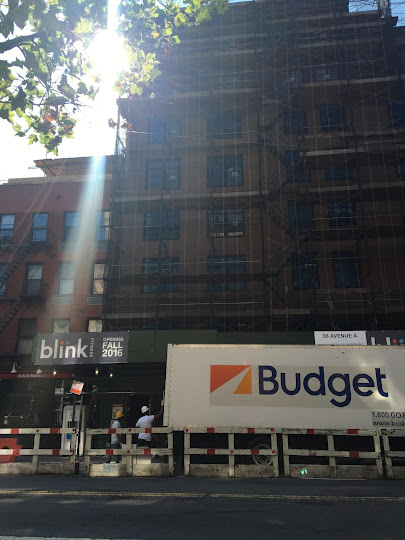 The coming soon signage for Blink Fitness arrived last week at 98-100 Avenue A.

The 12,000-square-foot facility, expected to be open this fall between Sixth Street and Seventh Street, has advertised fees "as low as $15 a month." Blinkers can pay $10 extra a month for a premium membership that includes access to any location. (Updated: This Blink location will be $25 a month, per a rep.)

After our post last week we heard from several readers who say they'll sign up for Blink, the low-budget sibling in the Equinox family ... mostly because of the price and also due to a lack other neighborhood gym options. (This is not taking into account more specialized places, such as Mile High Run Club on Fourth Street between the Bowery and Lafayette, CrossFit East River on Ninth Street near Avenue C or Nimble Fitness on St. Mark's Place. And SoulCycle on Lafayette and FlyWheel Sports in the Death Star.)

The Dolphin locations abruptly closed on both East Fourth Street and, several years earlier, on Avenue B.

One reader expressed frustration with the summer hours recently posted at the basement-level Iron and Silk on Third Street near Avenue A... 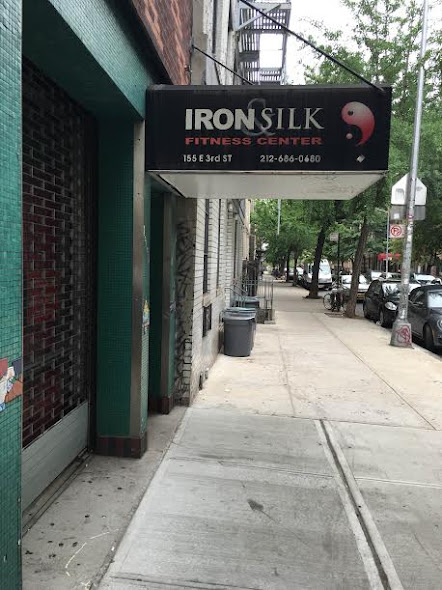 They are only open for four hours on Saturdays and closed on Sundays, two key days for people who work during the week... 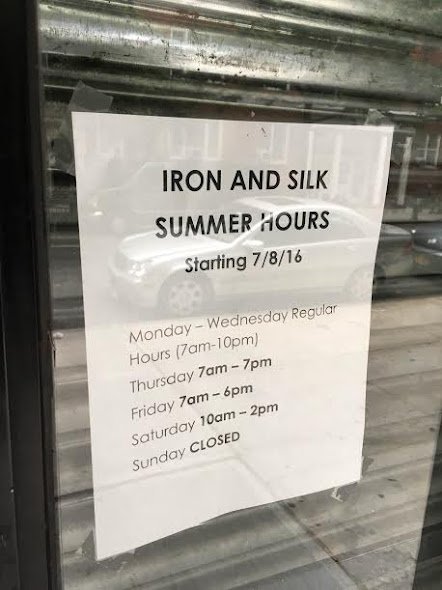 There's the Synergy Fitness Club on 14th Street between Second Avenue and Third Avenue that, despite the sign saying they are open 24 hours, isn't open 24 hours... 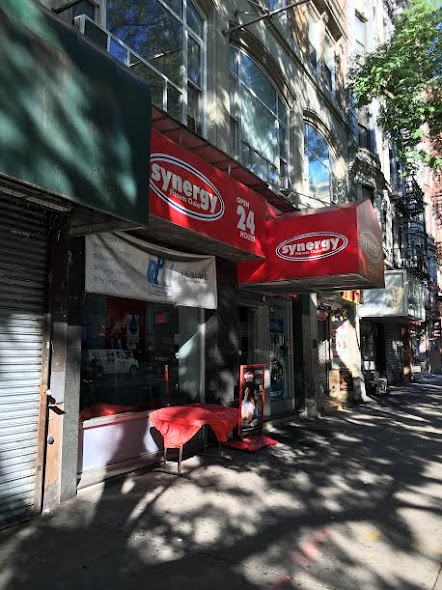 Several members have described this gym to us as "sketchy" with random opening hours... then there was this flyer campaign that someone recently launched nearby... claiming "Synergy Fitness will send your account to Collection without ANY NOTICE"... 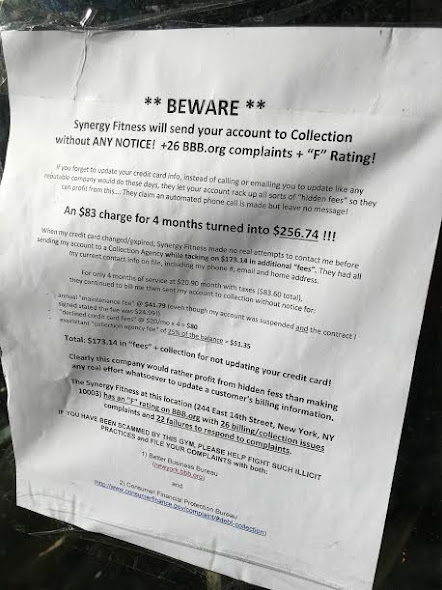 There's also the newish New York Sports Club on Avenue A between Second Street and Third Street. (Their website advertises a $39.99 single-club rate with multi-club access rates of $64.99 and $74.99.) Meanwhile, the 14th Street Y has multiple membership packages, though the prices aren't listed online.

Of course there's East River Park and the jungle gym at Tompkins Square Park. You can also get creative and take advantage of a stationary Citi Bike.
Posted by Grieve at 4:20 AM

Email ThisBlogThis!Share to TwitterShare to FacebookShare to Pinterest
Labels: 100 Avenue A, 98-100 Avenue A, Blink, gyms

There's also Blink on 4th and Lafayette, and Planet Fitness on 14th just west of University. Both are cheap ($10-20/month), have decent opening hours (7 days a week, Blink until 11pm on weekdays and PF 24hrs on weekdays), and not too much further west than the EV.

Will be nice to have a decent, large, gym with good opening hours that's east of 4th and cheaper than Crunch or NYSE.

I can vouch for Synergy Gym's sketchy practices. Card expired without me noticing and instead of letting me know, they sent my account into collections. Ended up being forced to pay close to $400 in penalties or risk my credit being screwed. AVOID.

Iron and Silk is a really goofy name for a gym. Oh, pardon me -- fitness center. I'm guessin' ... Iron for the bros, Silk for the laydees, right? barf

People, don't go to Synergy. They could not be more sketchy if they put out a big blinking sign that said "We'll sign you up for a membership you'll have to kill your credit card to cancel!!" Dolphin seems similar. Say what you will about Blink, NYSC, and Planet Fitness being soulless corporate chains, but they all seem to be on the up-and-up.

Personally, I love the David Barton gyms, but the person responsible for their coolness was forced out of the company he founded! I won't support that. Barton has a new gym, TMPL, but alas it's all the way up in Hell's Kitchen. I <3 that little fit man.

I have no opinions on all the boutique fitness places because I'm not made of money or time.

The YMCAs are also weirdly very expensive. No thanks.

The only people who say "No one needs a gym, just work out outside" are 1) unfit people with no perspective or 2) the fittest of the fit, like Marines.

thank you for reading my novel

Tried Blink on Lafayette and 4th for a while as well as Synergy on Mulberry. The latter was as sketchy as the one of 14th. Don't do it.

Blink is pleasant if you're one of those people who just like to use the cardio equipment. There's tons of them. But if you do want to lift weights or do mat work, it's pretty sparse. However, it was also easy to cancel my membership with no hassle when I wanted something else.

I was a Crunch habitue. Not the cheapest, but actually open long hours with lots of equipment.

Ludlow Fitness on Ludlow just above Delancey is a bit out of the neighborhood, but it's a good option. The people are extremely nice, it's not at all sketchy, and it's less than $500 for a yearly membership. It's not that big, but if you can avoid going during after-work hours, it's not too crowded. It's open 24 hours a day during the week, and closes at 9pm on weekends.

I'm really not a gym-person. I get bored. Closest thing to a gym I like is going to (some) yoga classes. But, for a few months a couple of years ago, I was going to Iron & Silk and I really liked everyone there, owners, staff and clients, and had no complaints. Its name is no more silly than "Synergy" or even "Blink". Wtf do those words have to do with fitness? If a place is clean, safe and convenient, I don't see why it can't be called Bubblegum and Kick Ass if they want.

"Iron & Silk" is a book by Mark Salzman about his travels to China where he learns Kung Fu. Perhaps the name of the gym was inspired by the book...

Ah, thank you 5:02. In that case, please disregard my calling the Iron & Silk gym goofily named. My apologies

yours in fitness,
The Novelist

I joined this gym when it was called Powerhouse and was 24 hours; it promptly changed its name to Dolphin and soon after cut its hours. I had specifically joined because it was 24 hours, so I wasn't happy with the change; however, I did end up using other gyms in the Dolphin chain.

It was a similar bait-and-switch, in my opinion, to taking the successful Pineapple fitness center on Houston street and [aptly, IMHO] renaming it Raspberry.

I thought this space was going to be Trader Joes?

There's my gym, New York Health & Racquet, on Cooper Square. Clean, airy, hot tub, sufficient equipment (but I go at off hours like 2 pm), fabulous showers, if you join during one of their promotions you can save quite a bit (my membership is $125, still pricey but not as bad as Equinox). But if Blink has good showers and a couple of recumbent bikes I'll probably switch.

The only people who say "No one needs a gym, just work out outside" are 1) unfit people with no perspective or 2) the fittest of the fit, like Marines.