Moonstruck Eatery closes on Avenue A That's it for the Moonstruck Eatery. The diner has called it a day at 167 Avenue A after one year here between 10th Street and 11th Street.

The space has been on the market since April, per a listing at LoopNet.

Four other locations of Moonstruck Eatery remain in the city. (The Avenue A address has already been scrubbed from the website.)

The previous tenant, Ethos Meze East Village from the same owners, lasted less than a year in business. (And before this, it was the world-famous Diablo Royale Este, which closed at the end of August 2012.)

I never tried the souped-up diner. Friends who dined here said it was all serviceable, but the decor was all wrong, part ski lodge, part homage to the Raven, the bar Karen Allen owned in "Raiders of the Lost Ark." 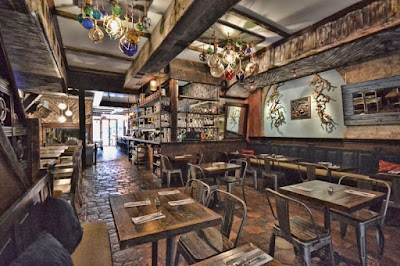 [Moonstruck Eatery pic via LoopNet]
Posted by Grieve at 4:15 AM

Email ThisBlogThis!Share to TwitterShare to FacebookShare to Pinterest
Labels: 167 Avenue A, Moonstruck Eatery

I got coffee to go here a couple of times; they couldn't even do iced coffee without making it taste burnt. That's a total deal-breaker, and decreased the likelihood I'd ever set foot in there again.

Newsflash, restauranteurs: Your take-out precedes you and lets people know if your restaurant is worth patronizing.

OH MAN. I started going here when it first opened after Pick Me Up closed (tragedy). The owner was really nice and the staff were very friendly. I used to go on weekends and sit at the bar for breakfast and unlimited coffee. I thought it was a great deal. You got tons of food for a cheap price (admittedly I almost always got some kind of omelette). I was very comfortable here, this sucks. Owner was super hardworking also, I used to chat with him and i'm pretty sure he never had a day off in the full year it was open. Good luck to him and the staff. Where will I go now???

Funny...I just tried the place for the first time last week and was put off by the unsanitariness and stomachache afterward. I'll keep supporting n'hood joints tho'...

another vacant store for the touted kushner gang. looks like sledgehammer got the better of those guys.

I had a really great brunch there a couple of weeks ago. Excellent food that was affordable. The place wasn't crowded - no obnoxious drunken loud brunch crowd - which was nice for me, but I guess a place like that just can't make it in the current EV.

I thought they were connected to the moonstruck diner on 58th or so, which is pretty good. These guys, not so much.

It's weird how some places don't take off. The food was good. The manager was awesome and the prices were reasonable. The rent is the problem.

Live next door. Not surprised.

Never went in myself for what Grieve said: it didn't know what it wanted to be, and although I love diners, this was not one.

Forewarning to investors: this will never be a bar again, so seek spaces elsewhere.

I was put off by the outside. It just didn't look like a diner.

It's the same sad story of many restaurants in the EV. Business is down and rents are too high. Drunks just don't eat that much.

Can't say I'm surprised. The food was "blah," and they tried to pass off corn syrup as real maple syrup. Could not trust them after that.

I did my best to support that place because we need diner food in Manhattan. The middle class has so little.

What happened to the turtle in the backyard?