The evolution of Ben Shaoul 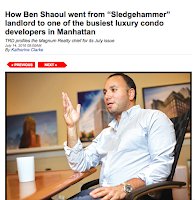 The July issue of The Real Deal has a feature story titled "How Ben Shaoul went from 'Sledgehammer' landlord to one of the busiest luxury condo developers in Manhattan." (The story was posted online this past Thursday.)

The piece offers new insights into Shaoul, whose real-estate actions have been widely reported in this neighborhood. For instance, Shaoul says that he only needs five hours of sleep a night. After that, he says, "it’s depreciating returns."

Over the past five years, he has scaled the ranks from a smalltime landlord to one of the city’s most important developers, partnering with major institutional capital providers and taking on ever more challenging and risky projects. His portfolio includes retail properties, condos, rentals and even dormitories. All told, he said his holdings are valued at more than $3 billion. In Manhattan, he currently has close to 500 new condo units on the market, which is likely more than any other developer right now.

The Real Deal also revisits the moment in March 2006 where he became known as "the sledgehammer," a well-documented story in which Shaoul and his construction workers knocked down apartment doors at the Cave, the building he had recently bought at 120 St. Mark's Place. Bob Arihood took photos of Shaoul and his crew, holding crow bars and sledgehammers, staring down Cave tenant Jim Power.

Although the ski-cap-topped Shaoul wasn't actually holding a sledgehammer — just a flip phone — Curbed dubbed him "sledgehammer" and it has stuck these past 10 years. (Curbed also once referred to Shaoul as an "80s breakdance movie villain." And maybe a little Johnny "Sweep the Leg" Lawrence?) 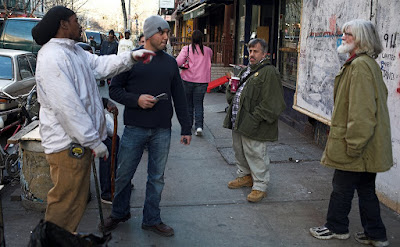 And what does Shaoul think of this sledgehammer moniker today?

Shaoul recently bristled at the depiction. “Do I wish people didn’t say that? Of course I do,” he said. “I have four children and a wife, and kids come to my house for playdates and stuff. The last thing I want is for one of those other parents to Google me and something that’s not even true comes up. You don’t want to handicap your children with that.”

Sources said the criticism Shaoul and his partners received in those years likely played a part in him transitioning into other types of projects.

As for more current Shaoul-East Village news... crews continue to work seven days a week (they do have permits for the weekend work) on the million-dollar condoplex at 100 Avenue A. 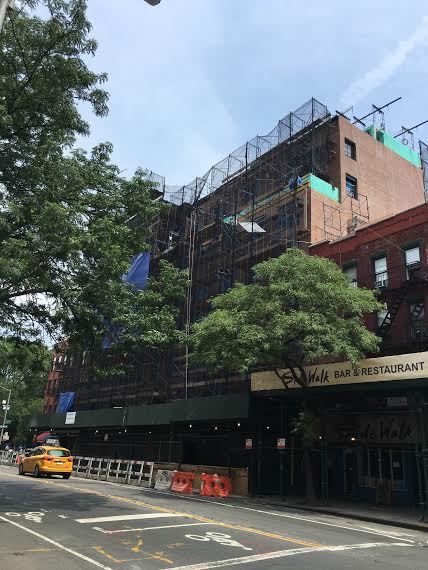 Like the typical greedy developer, he's over-leveraged, borrowing too much money, and flooding the market with too many units at a low price. By reducing his condo prices he's actually putting downward price pressure in the market, which undermines all developers including himself. His profit margins are so thin that he has left himself no margin of error. If you look at conversion or former rental buildings like the Luminaire on 23rd St the apartments are tiny little boxes that don't seem to be selling, the lobby renovation has been dragging on for months, and sales the luxury units at the Barclay have stalled, so playing the market at both the high and low end doesn't seem to be working out. The minute there's a hiccup in his business model or when the market bubble busts, he's toast.

The last thing I want is for one of those other parents to Google me and something that’s not even true comes up. You don’t want to handicap your children with that.

Wah wah wah, whiny boy. Shaoul's four children (sidebar: FOUR?? jesus) are bad enough off having a plutomaniac with short man's syndrome for a father. They'll just have to accept that he was depicted in the news as a thug back in the days when he was, well, acting like a thug. Life is hard, kids.

Also, as long as notorious Magnum henchman Josh is in his employ, you won't convince me that Shaoul is not still just a thug in a suit rather than jeans and a goofy ski cap.

Good luck on your futile quest to be accepted in high society, Bennie.

@9:03, I will bring the butter and jam.
As long as Shaoul's kids don't sue him for millions, I think we can safely say he's ahead of the game.

Not sure why you all hate this guy so much, he played the game and won. Be it legal or sometimes very dubious... The fact is your hate should be directed at the people that allow people like this to flourish. Cause, after all, if it wasn't him. It'd have been the next guy...

Steve Croman and Maria Hyrnenko were "ahead of the game" before they each got themselves arrested and face years behind bars. When will we stop equating success with how much property you own, or how many gold faucets you have in your bathroom, or how much of other people's hard earned money you have in the bank? As long as our species is reptilian by nature, I guess the answer is never.

did it also mention that he changed his methods after his tenants were forcrd out? and he then rewrote history for the sake of the children? HIS children!

fuck! it's always for the children: "The last thing I want is for one of those other parents to Google me and something that’s not even true comes up. You don’t want to handicap your children with that.”

forget about the children of the residents he abused and displaced. the truth won't handicap them.

he's so very rich now that he can do whatever he wants as he rewrites history "for his children".

All these guys are starting to panic as the market for all the apts in starting to dry up. He's already starting to toast and he may have switched models too late. The bubble is leaking as we speak. He's not as bad off as companies who run tourist hotels in Europe but he's getting there. When the inevitable terrorist attack or market correction comes and these units are being dumped he'll be finished. Sadly that's when rents and prices will plummet.

Treason doth never prosper: what's the reason?
Why, if it prosper, none dare call it treason.

It's good to see how people can change over time. It just goes to show you that anything's possible.

@Giovanni: "As long as our species is reptilian by nature," huh?

No, monkey boy. Those are all human traits you enumerated. You own them.

Reptiles never try to pawn off their faults onto other, and innocent, species.

@11:24. Why? Well I can only speak for myself but it's because I was his tenant and he was abusive. And because of what he did to the elderly residents of the Cabrini home, and their families.

If Shaoul's kids are "handicapped" it's not from reading his bad press, it's because they are being raised by a morally deficient father.

Dear Ben, If you don't want your kids reading about all the crappy things you've done in your life, then don't do crappy things to other people. Besides, all they have to do is ask their grandparents about you and I'm sure they wll get more results than Google.