Report: Cops looking for suspect who tied up woman after robbery on 13th Street and Avenue B 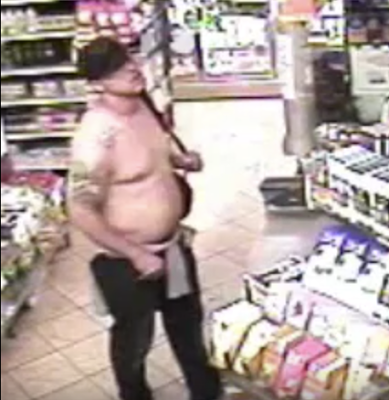 The NYPD is looking for a man (above) accused of robbing a woman, then tying her up in her building lobby early yesterday morning.

The man followed the 33-year-old victim into her apartment building at 13th Street and Avenue B at about 3 a.m., then told her he had a gun and demanded her property, police said.

The woman told police that she gave the man her smartphone, debit card, jewelry and $35 in cash.

Police have released surveillance footage of the suspect, who is described as a man between 30 and 40-years-old, 5-foot 10-inches tall and weighing 225 pounds.

Anyone with information that could help in the investigation is asked to call Crime Stoppers at 1-800-577-TIPS (8477). You may also submit tips online.
Posted by Grieve at 12:00 PM

Nice rack on that guy.

Awww he yawned. Terrorizing people must be very tiring.

Whatever happened to "Shoes and Shirts Must Be Worn"?

gee it's great to see people so concerned about the woman who was assaulted. hopefully she is doing ok after such a terrible experience and this horrible human being is caught

No Shoes no shirt

Seriously, there have been a lot of rapes and harassment going around lately. In every borough. And most importantly to our city electeds and the REBNY overlords, in very hot high price rental areas.

That tattoo probably seemed like such a good idea at the time... Now it'll just be such great evidence in court! No more: "You got the wrong guy!"
And what rocket scientist doesn't know that cameras are EVERYWHERE around here?!?!

Have they dusted for fingerprints? His hands were up and down the counter. Guarantee that wanker has an arrest record. Tying someone up is a bad sign.

That guy looks familiar. Isn't he a vice-president at Westminster City Living?