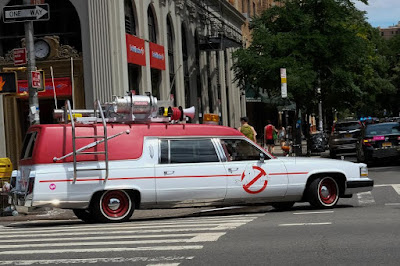 [Photo on July 7 by Derek Berg]

The "Ghostbusters" reboot is in theaters starting today ... which accounts for the multiple Ecto-1 sightings around, such as on Second Avenue and Fourth Street.

While on the topic, seems like a good time for a "Ghostbusters" flashback... to when 33 St. Mark's Place between Second Avenue and Third Avenue served as the exterior for Ray's Occult Books in "Ghostbusters 11" from 1989...

Here's some history of the shop via the "Ghostbusters" wikia:

Ray's Occult Books is a bookstore owned and operated by Ray Stantz (Dan Aykroyd) after the Ghostbusters were served a judicial restraining order.

Following the collapse of the Ghostbusters, Ray opened up an Occult book store; specializing in the bizarre, somewhat strange, and hard to find books. Peter Venkman (Bill Murray) is a frequent customer, as demonstrated by his having an account; he has been seen buying a book titled "Magical Paths to Fortune and Power".

Unfortunately, the store's lifespan was short-lived. Citing a change in buying trends and demographics on the block, Ray closed the shop before the movie even hit theaters.

And the block today... 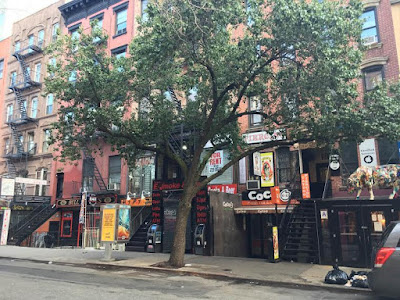 Look, it's Manic Panic, you guys!! oh, that really takes me back ... it's especially poignant in light of the rooftop douche referendum we have been having about St. Marks Place these past few days.

Whatever happened to Manic Panic? You don't see too many stores these days with rhyming names.

Ghostbusters 2016 = For the Girls-loving, hipster crowd and social justice warriors dying to call you a sexist when you tell them it's wack that it's all women (even though the filmmakers purposely made it that to be cute and annoy all the diehard fans of the first film and people who hate remakes.)

"Ghostbusters 2016 = For the Girls-loving, hipster crowd and social justice warriors dying to call you a sexist when you tell them it's wack that it's all women..."

Ooooh, the predictable "social justice warrior" clapback! That ought to give the necessary twinge of male-privilege payback priapation to a few suffering white male penises out there! ;)

It's predictable because you're boring. And awake at 3:22AM. Feeding your newborn baby, I hope.

Anyhoo, today I learned that my white penis was just a social construct so I immediately socially constructed myself a big black male penis and so now your desire for financial security and need for stitches can be fulfilled by ... just ... one ... man.

OK. Seriously, though, let's all knock it off with the female Ghostbusters bashing. We all know that even in the movie objectively sucks it can't objectively suck because women are an oppressed class. Too obtuse for you. Sorry. Try going to college next time, loser.

Well, Anon 2:26 pee-em, this particular disposable fun summer popcorn movie's sure got YOUR pressed penis up in a tizzy about it, because reasons. And upon further social justice warrior reflection, that's all that matters.

Until some rich-assed gentrification-mongering white hipster with a Lincoln beard and skinny ball-crushing jeans can make an indie movie about the life of your pressed penis and the objectively sucking female-centric films oppressing it, all we can do for your tears is give you an accessible Twitter/Tumblr/Facebook-ready hashtag to meme!

So does this Ghostbusters have a scene where a male ghost unzips Kristen Wiig's pants and gives her an eye-crossing VJ? LOL

Is there a female Department of Environmental Services stuffed shirt who accuses the GBs of illusion and trickery and does the female Igon scream "YOUR FATHER!!!" at her?

Does one of the female GBs proclaim "This GUY is TOAST!"

9 To 5 remake with a female boss and three male secretaries?

I wish all this new talent making movies and tv would write their own shit. Enough recycling the classics (maybe more like regurgitating or deficating). I really wonder if Harold Ramis was still alive if this movie would have even been seen the light of day.

It's not going to effect much on pop culture and other people's taste on what I think of SNL and their infinite irrelevance, but I think Kristen Wiig has never been funny and has been a coattail riding hanger-on on other people's popular films and shows like Apatow and the Concords.