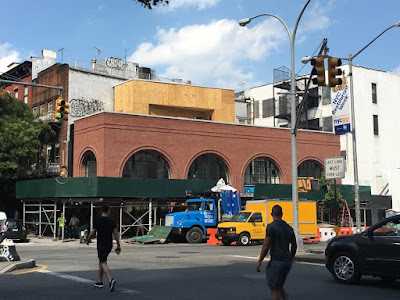 This past Friday, workers began removing the construction netting/bubble wrap from 76 E. Houston St. ... the new two-story building at Elizabeth that has been under construction for an awfully long time (given the size of the project) ... 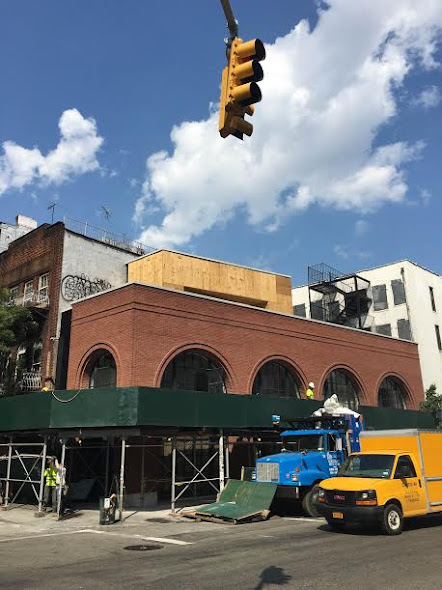 Construction has been going on now for two years. BoweryBoogie reported in October 2014 that work slowed down here due to Certificate of Occupancy issues and a dispute over the property line. (The issue was reportedly settled last summer.)

By the end of the day Saturday the sidewalk bridge had been carted off... 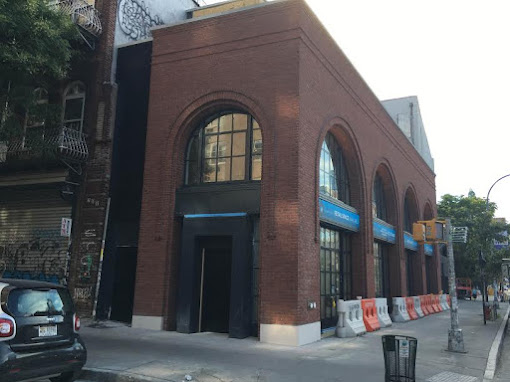 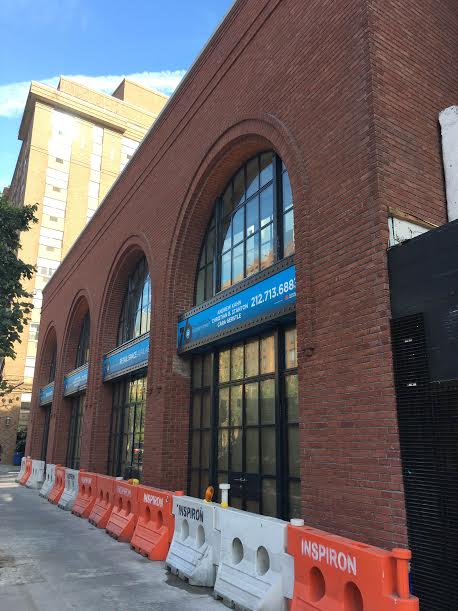 The previous brokers were billing this location as "the four corners of Downtown," with a summer 2015 completion date.

Cushman & Wakefield have the listing now. (Goldman Properties is the landlord.) The bare-bones listing didn't have much info, except that two commercial spaces are available: the ground floor is 775 square feet and the second level has 680 square feet. (Nothing about that rooftop space.)

The new building is adjacent to the Houston/Bowery Mural Wall, where Logan Hicks starts work on a new piece today. 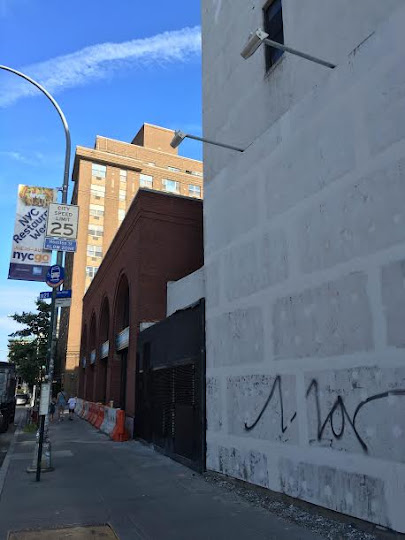 No. 76 was previously home to the always-entertaining Billy's Antiques.

Previously on EV Grieve:
Deal off to bring Crif Dogs to the former Billy's Antiques space

Full stop work order for 76 E. Houston St., and the return of Billy's Antiques (sort of)

Checking in on the incoming building at 'the four corners of Downtown'
Posted by Grieve at 4:16 AM

Looks like the perfect location for a Chase branch!

Wait? A new building that not only fits into the neighborhood but compliments it? I'm so confused! I need to think about this one over an acai bowl.

Thought I was going to like this more than I do.
The arches don't work, visually, for that structure.
And, Scuba nailed it.

Welcome to your new home Citibank!

it's not an improvement over the antique junkyard that was there, but this is a classy building.

That is ready to be sold, torn down, and a 20 story building up in its place.

Went past here in a taxi on Saturday evening and thought the structure was rather handsome.

I think it's gorgeous. Looks like a century-old building with a few later additions, it fits to scale, it's made of nice warm red (and staggered!) brick - THIS is what developers should be building, not the crappy shoe boxes they're throwing up (erm) all over the city!

Charming! It fits right in with the neighborhood older-look buildings. Just don't let it be a freaking bank or pharmacy...

Two years?? The English Channel Tunnel was built in two years - let's hope that the twats who "built" this aren't involved with the upcoming L-Train construction! What an embarrassment.

Nice building for a change. Who designed it?

Looks great! Hopefully the tenant is not a douchehole

Tribeca-based Gary H. Silver Architects is the architect of record.

Yes, two years, *as explained in the article*: "Construction has been going on now for two years. BoweryBoogie reported in October 2014 that work slowed down here due to Certificate of Occupancy issues and a dispute over the property line. (The issue was reportedly settled last summer.)" So assuming construction resumed last July, and counting time from late june 2014 when plywood went up, to October 2014 the time spent building was a year and a third. I'm guessing the Chunnel (which actually took EIGHT YEARS to finish, not two, using 11 giant tunneling machines) didn't face NYC real estate issues.

This looks fabulous. I hope it is wildly successful and other builders take note. It will be a damn shame if it's a bank but at least the aesthetics are right on. Rare to see new brick. I love it.