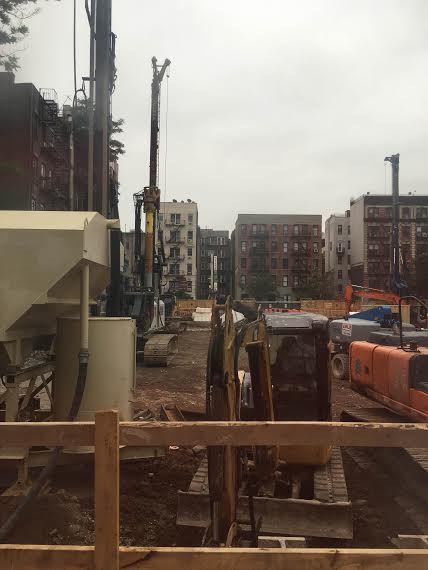 Last month, reps for the new development at 432-438 E. 14h St. made their case for a zoning variance for a 12-story building — four more than the area's zoning allows — before a CB3 committee.

For their part, CB3's Land Use, Zoning, Public & Private Housing Committee asked the reps to return after "exploring alternatives to increasing building height and requesting a greater percentage of 'affordable' units," as DNAinfo reported at the time.

On Wednesday night, reps for the developer (Benenson Capital Partners in association with the Mack Real Estate Group) appeared again before the committee.

A neighborhood leader was in attendance and shared this:

"At the meeting they presented minor changes to the 14th Street façade, but did not alter the height or offer a detailed financial analysis for their need for the variance. They did not consider the committee's concerns about the physical characteristics of the building and residents' concerns about the small number of additional affordable housing units on the additional floors.


As we first reported in May, the developers were asking for a variance because:

"Unusually elevated groundwater levels and exceedingly soft and unstable soil (owing to the presence of an underground stream) ... result in extraordinary construction costs, which make a complying development with affordable housing infeasible." (An analysis of the project put the extra construction costs due to the substandard soil at $8.8 million.)

The developers will next go to the city's Board of Standards and Appeals, though without any approval from the local Community Board.

Per the resident: "While not a victory yet as the BSA could still rule in their favor, it's a big step in stopping this out-of-scale development."

I am sure the BSA will stand with us nobodies against the mega-wealthy real estate developers. Because that's the way democracy works, amIright?

I'm calling BS on this. It's hard to believe that they didn't know what sort of soil and groundwater issues they were dealing with beforehand. Boo hoo, we can only make tons of cash if it's ALL lux housing, and oh yeah, we need those extra floors. Is this yet another 421-a "we don't want to pay taxes" structure?

Let's see if behind-the-scenes real estate mogul De Blasio flexes his muscle on the BSA as part of his rezoning scheme.

This is great news and I want to give a big thanks for the people in our community for taking their time and energy to stand up for the rest of us and the place we call home.

Now that they finally figured out that there's a stream running under their property, maybe they should just build a giant houseboat and call it a day.

Compromise is needed here adjust the variance of additional floors when Developer produces bon fided extra cost numbers to deal with additional foundation cost due to water issue. Accordingly let it just recoup overage with no gain. If developer walks away or shelves the project neighborhood will have a pond of possibly disease carrying mosquitoes living there. Do not cut off your nose to spite your face the crappy Post Office is not returning anytime soon.

What kind of bull are you trying to sell. The city could and would force them to clean up the site.

seriously, they couldn't cross the street and look at the construction between A&B to figure out that they've been spending the last year dealing with the underground stream? If CB3 gave them a variance you can bet the people between A&B would ask for one as well

Great to see a coalition of block associations working together to achieve this victory. If more residents worked together we could have an impact. Now it's up to Rosie and Gale to stand with the people to stop this. Congrats to the residents who attended two hearings in a row, did their homework and held CB 3 accountable, more folks should step up to the plate like these folks

No bull cmarrty they just shelve the project and let nature and its underground stream take over creating stagnant water. As for the city forcing them to do what pump out a natural stream? As long as the site is properly fenced in good luck with that.

9:41 PM: Agree, keep making noise!
4:15 AM: Manhattan will sink into the sea before the developers will abandon that prime piece of real estate. Enough already.

I would not count on Rosie Mendez for anything. For months I have been sending her letters asking her staff to have the MTA put the bus times in the plastic box at the M8 9th Street and Broadway stop. The route map is there, but the times? Perhaps it is too much to ask of her overworked staff. Small conveniences, particularly for those of us who don't use our smartphones for everything, are not too much to ask of elected officials. Of course, the staff could be overwhelmed with reading deeds before turning over buildings to developers!

Agreed, Anonymous 8:58; the schedules are missing from a lot of the Guide-a-Rides in our neighborhood.

Considering that a lot of people still don't have smartphones, it's a disturbing trend.

Shelving a project and abandoning a property are two different things. How many years was the property now The Jefferson sitting after the old RKO Jefferson Theater was demolished over a decade. Developers have great patience.

Where is all the community uproar about the SPURA building heights? The government places contextual zoning on the EV and LES but then violates it with every property in the SPURA project. Such hypocrites.