[Updated] Report of a stabbing in Tompkins Square Park 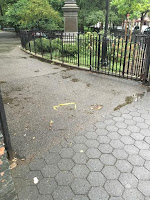 A man was stabbed in the neck three times this afternoon following an argument in Tompkins Square Park, according to several witnesses.

Multiple readers reported a heavy police presence in Tompkins Square Park starting around 2:30 after the incident took place near the chess tables in the southwest corner near Seventh Street and Avenue A. Sources in the Park told EVG correspondent Steven that the two men are regulars at the chess tables, and that the fight started over a cellphone.

A police source said that an arrest had been made. The condition of the victim is not immediately known.

Here are more details about the stabbing that took place yesterday afternoon:

According to Downtown Manhattan Patch, a 26-year-old man, whose identity has not been released, was stabbed multiple times with a pair of scissors.

Emerson Whitmore, 51, and Sarah Wilson, 36, who knew the victim, got into a fight with him over property that had gone missing or might have been stolen, according to the NYPD. Whitmore stabbed the victim in the back multiple times with the scissors.

Police charged Whitmore, who lives at the Project Renewal on the Bowery, with assault and possession of a weapon.

The victim is in serious condition at Bellevue.
Posted by Grieve at 5:53 PM

Time to bring the tower back!

This Pokémon Go craze is really getting out of control.

Can you imagine the post count if this stabbing was over Pokemon Go? Probably triple digits.

The crime in park has increased more police presence is warranted muggings random attacks...9th Pct. commander needs to get on top of this now.

Drug overdose in park. Drugged up lewd naked perverts. A car runs off the street on B. 3 shootings over the past 5 months. Slashings before that. Asian grandfather killed via violent punching. I am probably even missing a few major instances but toss this in, and its been a really sketchy few months / half a year. And that was following a period of a building exploding and a pcp fueled driver crashing into a bodega. Cheers to hopefully chiller times to come : /

What's the market rate rent now after this

So who was it before saying that the drug infested chess board crusties deserve a place in the park? Fuck that! Kick them the hell out

Yeah, people…you said you missed the old neighborhood; well, here it is!

(Personally, I think you can't have too many lewd naked perverts—particularly in the summer.)

These kind in violent crimes worry people but this was not a random act but between 2 people that most likely. So those afraid of the park now should not be unless you have derange violent friends.

As someone who has lived here for nearly three decades and misses the old neighborhood, I don't miss this aspect of it. I wish I felt like I could use the entire park but I know I can't sit and play chess--what people really use to do in that corner of the park because I will be harassed or caught up in the middle of a drug dispute.

...saw a naked perv in Inwood on Sunday morning-- there must have been 25 officers responding. Takes up a lot of bandwidth!

Bring back the NYPD Tower!
And remove the chess tables. A shame to feel like that might help, but some people are so selfish with their drug use and drinking and stealing and selling stolen property....time for them to get out of our neighborhood. Enough with the nostalgia .... we can be artists AND live in safety.

So someone got stabbed over how much heroin they could get for a stolen phone. No surprise here. Where are all the commenters who virulently defended these degenerates and their right to do as they please in the park? Where are they? Bring in some foot patrols. Also hoping for an early winter so these cretins can leave and go to SF.

Like poster above, I really wish for some foot (or bike) patrols from NYPD. I once saw 2 bike cops on E 6th St and was so happy I couldn't believe my eyes. Cops are so much more approachable and part of the community if they're not constantly hiding in their cars and vans.

TSP is kind of dead to me. It's a shit hole.

One more thumbs up for increased foot patrols.

Did the dude die?

Two thumbs up for increased foot patrols. And taser rifles. And random frisking. We can't be sure strollers aren't being used to transport contraband and pretty young blondes can be drug mules just as easily as anyone else. Will need some bomb sniffing German shepherds too. And stingball grenades. And let's consider imposing a stricter curfew.

Amazing - they put more police in the park and you all complain. Now crime getting to close to home and you want their presence.
You can't have it both ways.

11:36, thank you -- this seems so obvious to me -- dunno why NYPD doesnt have nearly all cops on foot or bike patrols, it's better in every way

Several months ago I saw a policemen walking near 11th Street and Avenue B. I was so shocked I asked him if he was actually walking a beat. He seemed embarrassed and mumbled but I think he said yes.

And remove the chess tables.

If we would teach more kids how to play chess when they're in school, we wouldn't even be having this conversation.

Anon 3:19: There's a big difference between a police tower in the middle of a park, and policemen and women walking the beat or biking, and interacting with the community. I've personally always felt this was missing from NYPD, especially in such a pedestrian-heavy town as NYC. For many people, this isn't just a desire in response to a specific incident, but a broader idea of how we'd like to interact with the police.

This corner of the park has been dicey since TSP reopened well over 20 years ago. I think it's denizens and authorities have an understanding about this. I try to avoid it. That being said, it used to be worse.

The neighborhood / park is 200% safer than it used to be. I feel very safe in the park & still do after this incident. I walk by & sit near the chess tables all the time. You just need to be aware/alert like in any part of this big city. Violent assaults happen all over NYC on a daily basis & are to be expected with so many people. Also, keep in mind that all involved in this incident were homeless & knew each other. This was not some random attack on a innocent person walking by... I really hope they do not bring back the ridiculous police tower.

It is not pleasant to be in Tompkins anymore..sadly.

See my post about making TSP a key park.

When the tower and a police presence was in the park, the community got bent out of shape -- as I remember, many of the most vociferous naysayers were E.V. Grieve readers and now they're complaining about a lack of police presence in the park .... hmmm... a contrary group.

The park is well due a major renovation after more than twenty years a redesign of areas and usage should be considered. This park has potential it actually needs a conservatory to help fund it and govern it. Letting it slip away as it once did would not be beneficial.When my golden was alive we enjoyed the park sometimes several times a day. We met people engaged in conversation mostly about our dogs. A napping area for junkies and Riff-Raff hanging out dirty is not the meaning of a park at all. In dense urban environments natural green settings are important any redesign should have goal as making more of the park green replanting hardwood trees to make up for the loss over the last few years and better rodent control.