An idea for this 'vacancy hotspot' on Avenue A 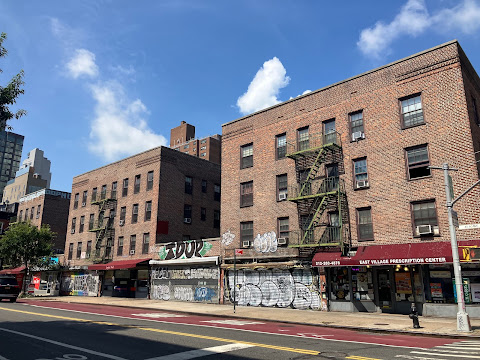 Per our lead post from Monday, there's a new report titled "Crisis and Adaptation: Storefront Trends in the East Village, 2019 – 2021."
As noted, there are many takeaways from the 20-page report, including a section titled "vacancy hotspots."
Among those: The retail spaces in the NYCHA-owned First Houses on Avenue A between Second Street and Third Street. Three of the seven Avenue A-facing storefronts remain vacant and have been for years.
The report offers this recommendation:

Urge the NYCHA to make their vacant spaces on Avenue A available for vendor markets, micro-entrepreneurs living in NYCHA developments, and local businesses more generally.

We don't know why the city/NYCHA hasn't made more of an effort to lease these high-profile spaces.

The other two vacancy hotspots are the retail spaces at Steiner East Village on Avenue A between 11th Street and 12th Street (for lease signs have been posted for the past four years) and the renovated storefronts at 250 E. Houston St.

The report, released by the Cooper Square Committee, Village Preservation and East Village Community Coalition, provides a deep dive into the neighborhood's commercial landscape that builds off of the 2019 "East Village Commercial District Needs Assessment" to give a 2021 snapshot of the EV commercial district.
Posted by Grieve at 4:50 AM

The Steiner spaces are massive; guessing they were destined for banks, mega-chains or other corporations needing large areas to conduct business in. The pandemic changed all that, but there is no mention on any of the "For Rent" signs as to whether or not they will subdivide the spaces - it seems like it's "take our 72,000 square foot monstrosity in its entirety or move on". My prediction - they will continue to be vacant for a long time to come.

This! We live right by the 250 e houston/NYCHA storefronts and we would love to see small businesses in these instead of vacant storefronts.

Isnt there a tax write off that allows RE developers to NOT rent?

9:25 AM is right...those spaces may not rent for the next ten years. Too bad for the condo association...

They could make temporary subdivisions, like creating a market with stalls for indie designers, artists, small biz people, etc. It would be so great to have more street-level biz.

There is no mysterious tax write off that benefits commercial real estate owners in NYC who have vacant commercial space.

There is revenue (which consists of rents and any other ancillary fees, such as laundry income, cell phone tower income, etc) and there are operating expenses (property taxes, insurance premiums, maintenance, cleaning, snow removal, paying a super, other payroll expenses, accounting fees, legal fees, any utilities that aren't the responsibility of the tenants, other administrative fees, reserves for replacing appliances etc). Then there are any loan payments, and there is depreciation.

The only reason I can think of (and I could be wrong, or missing something here) that a property owner would intentionally keep a storefront vacant is that commercial leases are usually at least 5 years long, sometimes 10 or 15 years long. If an owner isn't finding a viable tenant, I guess they might want to wait a period of time until one comes along, so they don't get locked into a bad lease for a long period of time. What is a "viable" tenant? I don't know, I guess it depends who you ask.

Overall, it's definitely not good to see all of these vacant storefronts. Not good for active streets, not good for crime prevention, not good for NYC economy. Our city can't seem to find the right balance. There has to be a reasonable, ethical way to give small businesses a better chance of surviving - and thriving - here, otherwise we just get closer to feeling like another soulless metropolis.

Agreed with the above commentators. After TJ and Target came in on 14th street Steiner is NEVER going to get someone to fill the entire space. Unfortunate for the neighborhood.

Small spaces.Who would move here now? I love going to Seward Park the best park ever. Just the coolest!! Not and no, but best of luck! Walk down Avenue A South and on the left by Hester Street on Essex.

The NYCHA vacant storefronts may be simple bureaucratic ineptitude. The restaurant owner who moved from there to a private building across 3rd St was desperate to get out because they were such horrible landlords.

NYC should present a proposition to the commercial space owners: either reduce the rents making it easier to establish a small business or sell the spaces to the city so it can create a fair and equitable situation in which small businesses can flourish.

@ anon 1:10: there is in fact a massive tax benefit when the landlord claims a new rent 5-10x the old lease, and then deducts it as a loss. While it is true that technically this is illegal, a REBNY spokesperson inadvertently confessed that this is widespread practice a few years ago. It is also quite easy to legalize the deduction of the phantom lost rent by creating a shell corporation that the right to rent the space is transferred to in exchange for equal payments to the parent/associated corporation, which payments are missed and then written off as a bad debt. This of course makes no sense if you only own one building, but if you own a portfolio, the tax benefit can outstrip the rental income depending on what magic number is chosen for the new rent, leaving aside the issues with the underlying mortgage (often secured or refinances based on a particular rental roll that will trigger a default if there is actual rental income below that figure). A vacancy tax is desperately needed.

For God's sake, MYCHA, do SOMETHING! In addition to all the other well-thought-out good reasons given here there is the one in which vacant storefronts invite graffiti on a large scale. I don't see NYCHA or anyone solving that.

Hi anon 4:10pm - if you have a link to that REBNY spokeperson's comment, could you share it? Would love to read it. Sorry to belabor the point here, but it does seem to be something periodically raised with a lot of misinformation and sometimes downright falsehoods. So when you mention writing off bad debt (uncollected rental income), that can only happen when using the "accrual method" of accounting, as compared to the "cash method". In the accrual method, yes you can declare an expected potential rent for an apartment, retail space, etc and if that rent wasn't collected on time, you can charge the missed rent as an expense/loss. However, in the accrual method, you also have to book the "potential rent". For example, if you are using the accrual method and you say your retail space should get $25,000 of rent per year, and it's vacant the entire year, you book $25,000 of expected rental revenue, and -$25,000 of bad debt. That results in $0 effecting gross income. Which is the same result as if you used the cash method of accounting. So there is no savings on taxes or anything like that. It's purely a choice by the taxpayer of which method they want to use.

None of this changes the problem we all want to see solved: vacant storefronts all over the place. Just wanted to clarify because folks seem to think there is a tax loophole incentivizing owners not to rent. If there is, I would be interested to learn more about that.