The Gov. has grim news: get ready for the worst economy in decades 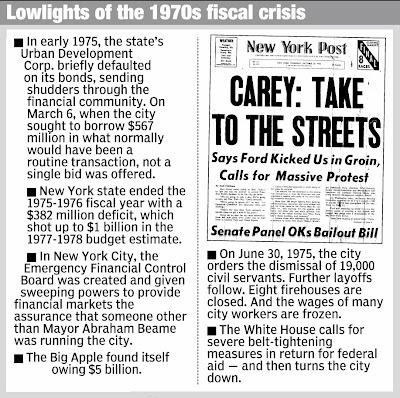 Gov. Paterson, convinced the state faces its worst fiscal crisis since the mid-1970s, will deliver the grim news in an unprecedented special address to New Yorkers as soon as tomorrow night, The Post has learned.
The governor's address - which his aides hope will be televised by public and cable news stations - will say that plunging state revenues will force painful cuts in state services, necessitate a reduction in the state work force, possibly through layoffs, and require other difficult economic measures, source said.

The city's kitty is also doomed as doomed can be.

Which makes this tie-in so perfect! Let's go out and buy expensive Depression-era clothes! 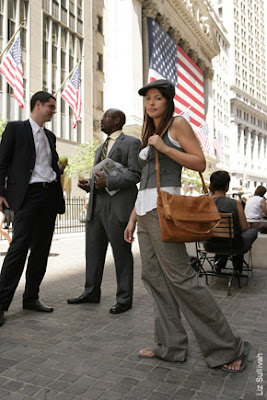 The duds say it all - and it's depressing.
Taking a cue from the grim economy, this fall's fashions at Banana Republic, Gap and H&M are featuring a distinctly Depression-era trend of cloche hats, pencil skirts, conductor caps and baggy, vintage-style dresses.
One of the most popular styles appears to hark back to the impish, newsboy getup of the 1930s: baggy trousers, caps, pinstriped vests, oxford lace-up shoes and utilitarian handbags.
"We associate the newsboy look with urban poverty - street kids of the 1930s," said Daniel James Cole, a professor at the Fashion Institute of Technology.
"Given that we're in an unstable economy and an uncertain political landscape, it's possible that a retro style has come back as a way to connect with our heritage."

Email ThisBlogThis!Share to TwitterShare to FacebookShare to Pinterest
Labels: bad movies we love, fiscal crisis, Gov. Paterson, New York Post, Newsies, seize the day, too many storylines in one post

Boy, we sure went from unending fabulousness to crises real fast despite our magically wonderful economy. Wasn't all this gentrification supposed to bring perpetual prosperity for all (or at least those who "work hard" like your average giggling yunnie)?

Also, about that fashion picture. I take it she's supposed to be dressed like that for work, right? The normally dressed men behind her must be thrilled that their young female coworkers have such lattitude in the appearances they can present when the whim suits them.

Reminds me when Rent made it to Broadway (not that I ever was a fan of Rent), and Bloomingdale's started to carry a line of bohemian or "Rent" themed style of clothing. Anything to look hip, and impoverished -- a fad based on thrifty living or other workaround activities. The bohemians, or the newsboys, dressed the way they did, because they went to thrift stores or made made the clothed themselves to save money because designer clothes cost are expensive. Now, these are now considered designer clothes and the Generation O's are paying lots of money to look impoverished. Perverse, indeed. Another example of their psychopathology.

I was figuring these sudden "we're doomed" stories were a ploy for the rich to get Bloomy a third term... Or maybe we should just blame A-rod.

Eric, do you remember when the department stories started carrying the grunge lines? Some $80 for a flannel shirt...the kind the people in the scene were paying 75 cents for at thrift stores...?

please. people walking around the east village all look alike, talk alike, dress alike. I call it the "east Village Uniform". In all its inhabitants lust for individuality, they succeed in uniformity. And they rail against "yunnies" and "yuppies" and the like. Its comical, really.

I think we're complaining about the same people, actually. It's true though, many of our young affluents, when angry at each other, may call each other "yuppies" or "hipsters", even though to a normal person they appear indestinguishable. I myself just used to write "yuppie/hipsters" to prevent this confusion, but Jeremiah at the Vanishing New York blog introduced me to the term "yunnies" which is supposed to include all of them, regardless of their own classification schemes.
I hope this clears things up!

yes, but does that include the older dudes who pine for the days of yore when they could score smack in the park and piss without abandon? I wear a polo and khakis to work. I suppose that makes me some classified name that you've concocted so you can differentiate yourself from me. I agree I hate those huge sunglass wearing bitches and their vapid boyfriends talking on the "celly" about meaningless shit but (a), my real estate values have skyrocketed and (b) i love looking at and living around those pieces of ass. I mean, come on, you're telling me that you don't stare at these young chicks' tits and asses? come on. If you don't, then why live here?

Yes, EV Grieve, I remember when Macy's carried the grunge line (and I was getting them from St. Mark's). Then, when Rent came to the mainstream, (and I was still wearing my flannel shirts), one of my college friends commented that "grunge is so out", "bohemian is in"; I didn't know that either grunge or bohemian was a fashion style or a trend. I've always thought of them as a lifestyle or a social viewpoint.

Well, you're right, Eric, they're supposed to be. But, as I'm sure you've noticed, our young gentry seems to have trouble relating to ANYTHING if it's not explained as a trend (witness the "Great Depression-chic" stuff above). After all, what do they need serious social viewpoints for--they're quite comfortable with things as they are.

Indeed Anon#2, this city has had no drug traffic whatsoever since the illustrious yuppie/hipster arrived. It's a shame that all those older dudes you speak of still pine for it, but imagine what it was like for them when they all had to quit cold tukey back around 2000.
I'm confused about your last question. Is the only reason I would live somewhere because I want to look at girls' tits and asses? At the very least, it sounds like you assume a very high degree of mobility on my part.

"At the very least, it sounds like you assume a very high degree of mobility on my part."

Well as long as your pecker still has some mobility the east village eye candy should do the trick.

Huh? You didn't answer my question.

Also, I think we fell off topic.

"Is the only reason I would live somewhere because I want to look at girls' tits and asses?"

Don't know about you but for me it certainly helps.

I gathered, yes.
Since we're on the subject, don't you find that the near-anorexic thinness of many of these girls robs you of the kind of full beasts that you would delight in (unless they have implants, which I know is common amongst them), or enough junk in the trunk to bounce on? I've always wondered what's so attractive about these girls who're about 90 lbs and don't even look grown up.
I'd like to hear your thoughts about it.

PSA: It isn't about what they wear, it's about how they behave.

I went to a small party last weekend thrown by college grads. I'm sure you could throw around all sorts of monikers to describe this crowd - but they were ridiculously friendly, excellent hosts and cheery to a fault.

I'd say this new Depression-era clothing trend has a layer of WTF that Rent/hipster/grunge/bohemian lack - it is crass and flippant about the suffering of folks, both past and present, who had to live through some pretty horrible times.

That chick in the photo is going to walk by some poor homeless person, and the message she'll be conveying is "Hey, look, open sores, AIDS and a growling stomach are cool today!"

Quite right, all around.

Though I'd still have to say the way they dress plays a part along with the way they behave. Coming in to work dressed like a stripper, or wearing what are basically expensive pajamas is a way of making it clear that they can do as they like and not have to fear losing any respect for it. Combine this with their usual behavior and college-educated speech: "no, 'cause I'm like so totally, like, over it, 'cause I was like, OMG! 'Cause it's like..."), as well as the various sanctimonious opinions they tipically express whenever angerd by something, and you have a very annoying little punk.
Now, I'm aware this isn't strictly confined to the females, since I have seen young yuppie boys walking down Wall Street in untucked Brooks Brothers shirts, loosley tied tie, baggy pants, and flip-flops (and wearing that little smirk of theirs), but over the past few years, the trend for the males seems to have been away from this and more towards dressing like a grown-up (one of the few noticable changes toward maturity that has developed in yunnie world). However, the female's dress is still allowed to be ersatz.
I think their unprofessional dress is very much connected to their shitty behavior. It's all part of entitlement.

I don't discriminate against pussy. As I get older, they all keep looking better and better. Thin, chubby, full breasted, small breasted, doesn't matter. Fresh-faced is all that matters.

Okay man, but remember there's more to them than just a pussy.