GOOD GOD, WHATEVER YOU DO, STAY AWAY FROM SIXTH AVENUE BETWEEN 40th STREET AND 58th STREET TODAY!

Oh, why? Let me get press release-y: More than 110 of baseball's greatest current and retired players will star in the fourth annual All-Star Game Red Carpet Parade presented by Chevy on Tuesday, July 15th from 1 p.m. - 3 p.m., before the 79th Major League Baseball All-Star Game at Yankee Stadium. The All-Star Game Red Carpet Parade, which will start at 40th Street and Sixth Avenue and end at 58th Street and Sixth Avenue, is expected to draw approximately 1 million fans on the streets and from office buildings along the route.

Oh, and Mayor Bloomberg will be there!

Anyway, hope someone pulled up the weeds from Sixth Avenue. 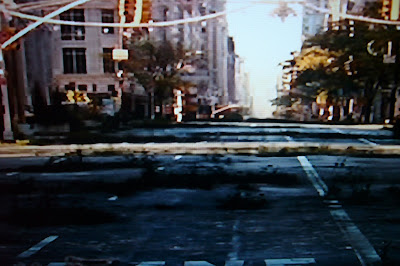 Email ThisBlogThis!Share to TwitterShare to FacebookShare to Pinterest
Labels: All-Star game, Major League Baseballl, Stealing images from I Am Legend