Inside Aubrey O'Day's apartment (for some reason) 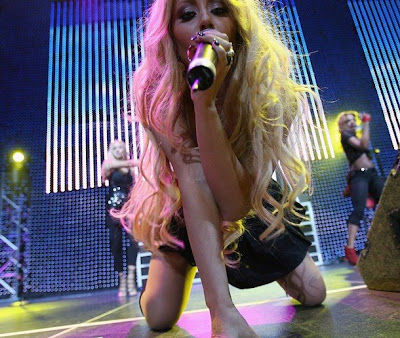 I love when the New York Post takes us inside the homes of really famous celebrities!

In the paper's real-estate section on Thursday, we were treated to an inside look at the one-bedroom Midtown apartment of 24-year-old Aubrey O'Day. You know, she's in the pop band Danity Kane! (Yeah, me neither.) She's also starring now in Hairspray on Broadway!

She chose an apartment not too far from the theater and right in the middle of just about everything else.
"I love this building," she says, in a soft voice that's a cross between Marilyn Monroe's and a Valley Girl's. "And I love being in Midtown. There are great sushi restaurants in the neighborhood, and I'm right across from Pinkberry."

The one-bedroom, one-bath apartment with a kitchen area measures 725 square feet, according to the building's management, but it looks smaller. If she feels cramped, O'Day isn't complaining.

"There are big closets," she says, "and I have tons of clothes. And there are lots of drawers and cabinets to put things in."
To offset the earth tones of the contemporary furnishings, O'Day brought in pink and orange pillows for "a bit of warm personality and excitement," she says. "I also brought in lots of flowers and candles and photos; there are tons of them all over my apartment. They're all of me and my friends and the different things my girl group has done. Some of them are magazine covers.

"My apartment smells really good," she adds. "I have tons of smelly stuff like perfumed sprays and scented candles. I love vanilla candles and lilac."

She also filled up one wall with photos of Marilyn Monroe and Audrey Hepburn.

"They're real celebrities," O'Day says. "That's my favorite wall in the house. My favorite place in the house is my bed." But she's happiest, she says, when her dog, Ginger (a Teacup Maltese), is curled up on her doggie bed.

Another of O'Day's additions to the apartment is a big floor-length mirror where she puts on her makeup. "I'm definitely a makeup girl," she admits.

Aubrey O'Day's Favorite Things
* Her puppy, Ginger
* The flowers
* The wall of photos of Marilyn Monroe and Audrey Hepburn
* Her personal photos
* Her bed
Posted by Grieve at 6:57 AM

Jeremiah, all I'm sayin' is the girl has class.

What happens when Pinkberry closes? ('cause we all know those fro-yo places have a short life-span).

What will she ever do? Would she feel that the world is closing down on her?

I would never go in anyplace called "pinkberry". i dont care what they sell.