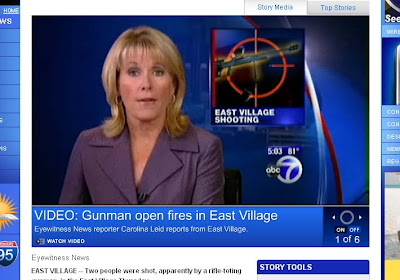 The Times has an update on the shooting this morning on East 7th Street and Avenue D:

A gunman shot and injured a man on an East Village street early Thursday and then fired several times through the storefront of a delicatessen, striking an employee who was making coffee, the police and witnesses said. The two men were taken to Bellevue Hospital Center in serious condition, the authorities said.
The suspected gunman then got into a van and drove to a nearby police precinct on the Lower East Side, left the weapon in the vehicle and turned himself in, the police commissioner, Raymond W. Kelly, said at a news briefing.Mr. Kelly said the gunfire erupted over a dispute but he had no further details.
The shooting took place about 8:15 a.m. near 278 East Seventh Street, the police said. That was the building where one of the victims, whom neighbors identified as Calvin Gibson, 50, lived. He was shot six times, the police said.
The other victim, Mohammed Islam, 18, was shot several times in the arm not long after he had opened the Jahanara delicatessen at 280 East Seventh Street, according to his brother, Sohel Arman.
Neighbors said they believed the gunman had been living with his mother in the same building as Mr. Gibson for several weeks after he lost his apartment in Chelsea.
“He was screaming, ‘Stop talking about me!’ ” said the neighbor, Aurelia Diaz, adding that she had heard the noise through her open window. She said she then heard Mr. Gibson saying “leave the kid alone” before it was quiet for about a minute.
Neighbors who knew Mr. Gibson described him as a friendly man and the vice president of a tenant’s association in the building. They said he was a co-owner of a clothing boutique called Dejavu in the East Village.
A woman who lived across the street and said she knew Mr. Gibson, Loreen Stevens, 38, heard a popping sound in the morning and parted her curtains to peer out.
She saw a man standing over Mr. Gibson, who was on the ground.
“He was hovering over him, making sure that he was hit,” she said.
“It was not like he was trying to hide what he was, or what he had just done,” she said. “To me it seemed like he was on a mission.”
The gunman then turned toward the deli and started firing through the glass. There were four holes in the storefront.
Ms. Stevens said she ran across the street but the gunman had gone. She went to Mr. Gibson, who was lying on his side.
“He told me, ‘I was just going to get coffee,’ ” she said. “He kept moving around.”
“I was like, you’re going to be O.K.,” she said. “He kept tossing and turning.”
Ms. Stevens said that Mr. Gibson said he was in pain and kept repeating “4-D, 4-D.”
Channel 7 has video clips.
Posted by Grieve at 6:59 PM

I was hoping that Economakis was the one that got shot. Damn.

EV need more shooting like this to reclaim EV back from all these transplants.

What a truly horrible thing to say. Even as a joke, which I hope it is. I live on the block with my kids and they could've easily been shot instead - this is when we leave for school in the morning. The east village transplanted orthodox jews for germans, then ukrainians for jews, then puerto ricans, etc. etc. If you don't like the transplants, move back to ohio.

Oooooh, what about the kids. They could have been shot. If you don't like the shootings, go live in the suburbs. O h wait, NYC is now a suburbs, Never mind.

talk about yunnies. anyone as flippant (and bitter) as you apparently are is the one who shold be shot. Maybe if you cared about the safety of other people, we'd care about what goes on between your ears (which apparently ain't much).

I'd rathere be shot than live amongst yunnies. Talk about death, you killed NYC, and that's all you people know what to do-- kill. Are you related to the shooter by any chance/ me, me, me, my kids, what about MY kids. They haven't been shot yet. Maybe if they have the same attitude as you do then maybe you and your kids ought to be....

Ahh... the power of anonymity of the internet, say that in person, you f*ck*ng coward. Now, run along to mommy and daddy and hide behind their wallets.

Can't we all just get along without any shootings involve.

How can people be so retarded and talk about shooting being a good thing or anything alike? Also linking that to the discussion about gentrification seems perverted to me. By the way, if the gunman was living in Chelsea before he himself was part of that, so that reversed that discussion.

Anyways americans have a weapon problem and it seems a general being-fucking-monkeys with no brains problem.

While anonymous is being outrageous (and also anonymous which is very distressing?) his (or her) point is well taken.

While it seems like we are now living in the suburbs, we are in fact still living in a city surrounded by people we don't know and will never know. Unlike the suburbs where you know who your neighbors are (at least I think that's what it's like because that's what I see on tv), because there aren't that many of them, we are packed in our apartments like sardines and anybody can move in next door or down the block without us even noticing. It happens daily, despite the increase in rents.

There is a website http://www.nsopr.gov/ that shows where sex offenders live. There are 18 in 10009 (possibly fewer as some seem to be duplicates). Have you warned your children to avoid these people? I bet not.

For those of you who live here with your kids (as do I) you have to know that there are risks. If you think it looks fancy on the outside, you are mistaken about the inside. While we lament the loss of the character of the visible parts of the East Village, there are still, believe it or not, a wide variety of individuals here, some of them not so nice. And they aren't all NYU students.

"Ahh... the power of anonymity of the internet, say that in person, you f*ck*ng coward. Now, run along to mommy and daddy and hide behind their wallets."

You are truly a bitter bitter person. I pity you.

hey bitter anon. are you that 18 "punk" kid who came here from p'burgh and lives on St. Marks place? Dude, newsflash: this isn't 1988 anymore. You're not cool. You're pathetic.

I pity the people from p'burgh.