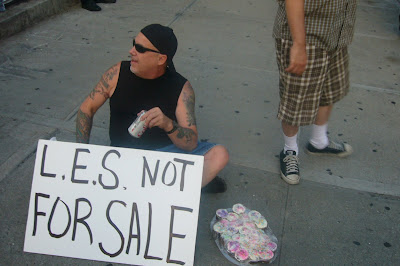 AS the unofficial leader of what is known as the East Village "slacktivist" movement, John Penley routinely protests: real estate developers, wine bars, wine bars owned by Bruce Willis, landlords, Republicans and the evergreen that is yuppie scum. "Frat boys throwin' up or takin' a p - - s on your building," he says. "Drunk, blockin' sidewalks, not lettin' baby carriages pass . . ." The 56-year-old Penley also enjoys shouting down obnoxious NYU students, inserting himself into neighbors' landlord disputes and making daily calls to newspapers and networks about area goings-on.
Penley is also, quite possibly, New York City's cuddliest anarchist: a burly 56-year-old Vietnam-era military man and ex-felon with two gold front teeth, lots of tattoos and a deep affinity for children, animals and the writings of Thomas Wolfe. He was married once, briefly, but doesn't like to talk about it.
One of his roommates was rock star Cat Power, who moved out and on long ago, but still pays her third of the share on Penley's $600-a-month apartment on Avenue B, where he has lived the bulk of his 25 years in the city. (His other roommate is a graphic artist.) Penley is something of a local on-call baby sitter, and is quick to dispense loose change or cigarettes to anyone who asks.

For further protest reading on EV Grieve, here's where to go.
Posted by Grieve at 7:16 AM