Too many people got Carrie-d (groan, sorry) away on the stoop 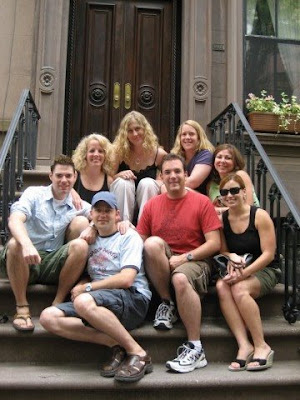 According to this week's issue of The Villager (via Jeremiah):

Call it “Stoop and the Groupies.”

With the May film release of “Sex and the City,” flocks of female fans of the show once again are pouring into narrow Perry St. in Greenwich Village. But as waves of women visit the front steps of the imaginary home of Carrie Bradshaw, tempers in the community have begun to flare.

Visitors are lured to the area by the fictional lives of the characters created for the popular TV series. They sit for photos on “Carrie’s stoop” and shop in local boutiques. They wait on line for cupcakes at nearby Magnolia Bakery, then sit outdoors eating them on a nearby bench — just like Carrie and Miranda did.

For the show’s fans, at least, it seems a picture-perfect ritual. Yet, in the sweltering heat of summer, some neighbors are resenting all the ruckus and seeking an end to “Sex and the City” tours on their streets.

Last week, residents won a reprieve, when, on July 15, the largest of the tour operators, On Location Tours, announced it would take Perry St. off its route.

On this solemn occasion, I'd like to look back at this post from June 2:
These are a few of the photos you'll find when you search for "Carrie Bradshaw" on Flickr
Posted by Grieve at 10:58 AM

Ugh. Those photos!!! Such idiots.

why are they idiots? Isn't this how you look when you take photos when you go abroad or on vacation? And you talk about "yunnies"?

Uhmmm, anonymous 12:57 PM, it's not how they're dressed that they're idiots; it's their choice of where they had their pictures taken -- the stoop. Of all the places to visit to NYC, they would go to a fictional place from a show that glorified materialism, consumerism, jet-setting New York lifestyles, which hence brought the "douchification of the Meatpacking District and the West Village" and the people who would line up at Magnolia Bakery stuff their faces with cupcakes and tromp around the West Village and the careening of tour buses, gaggles of fratboys puking outside Hogs & Heifers and rows of women linked at the elbows mowing down pedestrians. That's what's idiotic about it. Are you Kassy's friend by any chance?

i have news for you. those dumb fucking french people think we're idiots for taking pictures at jim morrison's grave. countless other tourist spots around the world look idiotic to some people. you ain't the arbiter of where tourists can and cannot go.

people line up outside clinton street baking co., a restaurant which patently sucks and where the wait staff are little dickheads. but people still wait. i don't know this "kassy" bitch from a hole in the wall and neither do you, but why the fuck should you care where she or her dumb friends want to party? you're just pissed off that you can't fuck her.

I think you need to fuck Kassy, to chill a bit, just a bit.