Streets around Tompkins Square Park were blocked off yesterday for the crew to shoot something for that ABC series Cupid. I tried not to pay attention. I usually don't. However, last summer, before I was doing this site, I shot some photos of what promised to be an enormous project in the neighborhood. 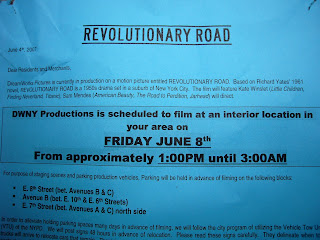 The ominous-looking fliers went up several days before the blessed event was taking place on June 8. As the flier showed, the movie would feature Kate Winslet (ohh!) and directed by her husband Sam Mendes. The movie is based on the 1961 novel of the same name by Richard Yates. The flier failed to mention other co-stars, such as the leading man. You may have heard of him, an up-and-comer who I think has real potential -- Leonardo DiCaprio, who would be making a triumphant return to the East Village, where he shot parts of The Basketball Diaries in late 1993 and early 1994.

Anyway, as the week went on, more and more equipment was assembled around Tompkins Square Park. This thing promised to hog up most of Avenue B between 6th Street and 10th Street. Plus the north side of 7th Street between Avenue A and C. (Good lord, where would people heading to Le Souk this Friday night park!) 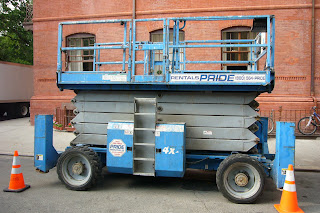 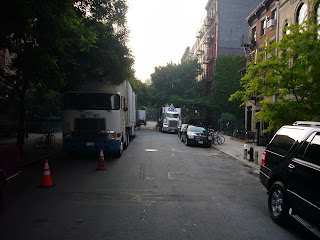 I chatted up some poor bastard who had to sit there in a folding chair and guard a truck. Turned out they were only filming interior shots at 295 E. 8th St. at Avenue B. That regal-looking building on the other side of the street from St. Brigid's was erected in 1887. It was known as Newsboys' and Bootblacks' Lodging House as well as Tompkins Square Lodging House for Boys and Industrial School, Children's Aid Society. Parts of Jim Sheridan's movie In America were filmed there a few years back too.

Anyway, after all that, the filming wasn't as disruptive as I thought. (I'm open to horror stories, please.) In fact, it was pretty mellow, as least what I saw of it. No obnoxious PAs barring residents from their homes or sidewalks, etc. No screaming fans looking to mob Leo (guess that's why his name wasn't on the flier). It was a pleasant change of pace from some of the other obnoxious shoots around the Park. The movie comes out here on Dec. 26. 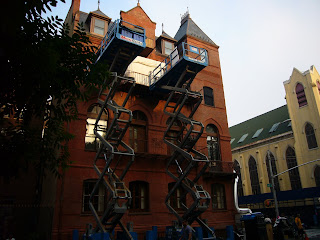 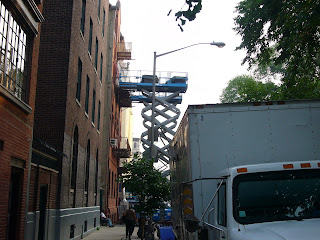 Why the East Village will be a mess tonight and tomorrow

UPDATED:
Bob Arihood shows how Cupid disrupted the neighborhood, particularly the business at Ray's. (Neither More Nor Less)

revolutionary road is one of my favorite books of all time. have you read it? it's amazing. i would not have cast leo, however.

I agree. The book is great--And most of Richard Yates writings (especially the collection of short stories eleven kind of loneliness -- hope they don't make this one into a film). Am not sure if I'm going to see the film version of Revolutionary Road. Often times, I do not, unless there's a big buzz around it.

I haven't read the book. I'm afraid if I try to read it now, I'll keep picturing Leonardo and Kate!

As for the film, given the limited Dec. 26 release date, this must be one of the studio's big Oscar-type extravaganzas.

The apartment building is a rental for what appears to be mostly rich kids. I live on the block in a coop. I remember than day and asked one of the roadies where Leo was keeping his sloppy seconds and if I could have some. The response was not positive.