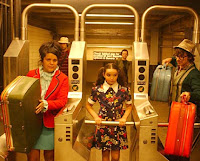 At 14 years old, the Trachtenburg Family Slideshow Players drummer (and daughter of its singer/guitar player Jason and costumer/slideshow operator Tina) is already playing a more active role in local politics than most of us ever will.

New Yorkers are, by now, familiar with the proposal to extend term limits and allow our mayor, Michael Bloomberg, to run for the city's highest office a third time. As part of the process, the city council is now holding public hearings, allowing citizens to argue for or against the plan. On Thursday, Rachel spoke to the council, making the case against allowing Bloomberg to seek a third term.

In her testimony, Rachel told the council that, because Bloomberg raised taxes to give money to the Yankees and move the fountain in Washington Square Park slightly (and continuously sided with landlords on rent stabilization and affordable housing issues, I might add), her family was priced out of their East Village home. Now, they live in Bushwick, where their friends are often mugged at gunpoint. "Any monkey can raise taxes," says Rachel. "No offense to monkeys."

Meanwhile, BushwickBK.com has an important addition to the story:

A minute of research shows that Rachel is enrolled in school in SEATTLE — which means her family’s apartment in New York is at best a business necessity and at worst a luxury or status item, even if it is now in Bushwick. Boo. Hoo.