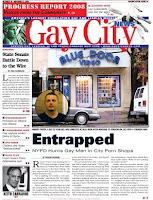 Are cops entrapping gay men at Blue Door Video on First Avenue in the East Village? Gay City News has the story today.

Blue Door was closed in June under the city nuisance abatement law after vice cops made ten prostitution arrests there in January and February. The criminal complaints in those arrests were filed as part of that lawsuit. In every case, it was police who first mentioned money.

Russell Novack, a senior staff attorney with Legal Aid who handles thousands of prostitution cases each year, said he has seen European gay men prosecuted for prostitution in Blue Door.

"I really don't think that European tourists are coming down to the Bowery to be prostitutes," Novack said. "The police send undercovers in there to solicit guys."