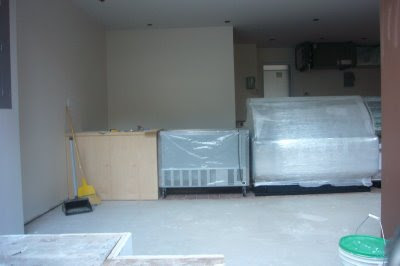 We've been far too curious about the fate of 159 Second Ave., the hallowed ground that was home for 27 years to the beloved A. Fontana Shoe Repair. There has been lots of activity there in recent weeks. Anyway, we started (sarcastically) speculating about the future tenant. Based on the above photo, there was one undeniable conclusion: high-end dessert place!

An unimpeachable source -- an anonymous tipster, who, for the purposes of this post, we'll call Jeremiah Moss -- passed along the following news on the location late yesterday:

I went by today and a worker told me it's going to be "a vegan ice cream shop." I saw soft-serve machines in the background. Should be open in 2-3 weeks. Could it be another Lula's Sweet Apothecary? Or competition?

Time will tell! Anyway, there's going to be an all-out dessert war in this area now (as if there wasn't one already)...FroYo vs. Vegan Ice Cream vs. TheLiteChoice vs. Chocolate By the Bald Man Who Kind of Looks like Moby vs. the M&M's we can buy at the corner bodega vs. ChikaLicious vs. Dunkin' Donuts vs. Cold Stone Creamery vs...(Meanwhile, we'll just be at Ray's.)

Oh, here's what the space looked like in August... 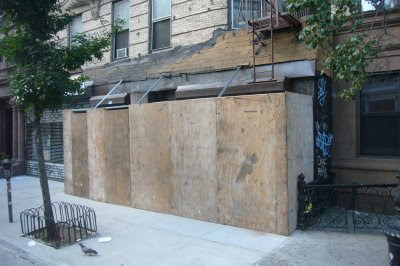 [Jeremiah has a thoughtful post on what used to be in this space, A. Fontana Shoes.]
Posted by Grieve at 8:06 AM

Gluttony by the Bald Man.

High cholesterol by the Bald Man.

what is vegan ice cream???is it made with tofu???