By now, no doubt, you have already registered for the ultra-supreme tickets at the New Jets Stadium. Check out the Coaches Club...where you can stand on the field -- just five yards off the Jets bench! Oh, and access to a private 20,000 square-foot bar and lounge! 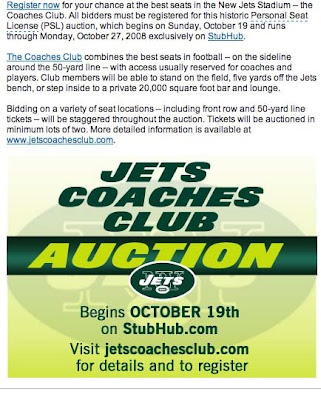 As the Post reports, at least one fatcat has already overpaid, which prompted giggles. And quips!

Looks like the mystery mortgage mogul who shelled out $400,000 for the rights to buy the two best seats in the house for Jet games fumbled the timing of the market.
That's because the "personal seat licenses" for nearby seats in the much-hyped Coaches Club section at the new stadium are selling for less than a third of the price the fat-cat fanatic paid.
"Maybe he's used to overpaying for assets," quipped Kyle Burks, president of Season Tickets Rights, referring to the current mortgage meltdown.

He must now also fork over another $14,000 per year for his actual season tickets.

And check out the incredibly life-like artist rendering...And just what is going on with head coach Eric Mangini on the far left?

Is the game in his pocket? 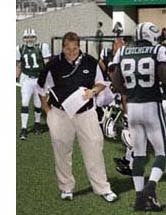