A collector of New York ephemera 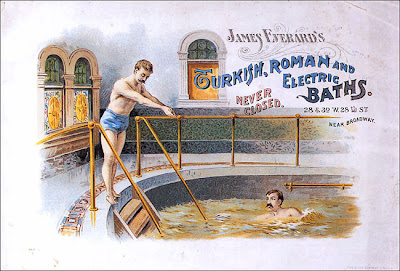 The Times has an obituary today on Herbert Mitchell, 83. "At the Avery Architectural and Fine Arts Library at Columbia, where he worked from 1960 to 1991, and in his own sequestered apartment, he assembled something extraordinary, if slightly beyond description," the Times notes. “His was the most eclectic collection of the valuable, the semi-valuable and the somewhat-not-valuable,” his attorney said. Much of it is to be given to the Metropolitan Museum of Art, he added. Among the treasures he had already donated: 3,866 stereographic views of New York City from the 19th and early 20th centuries that show Central Park not long after its construction. “One of his real interests was ephemera — that part of history that disappears,” said Kitty Chibnik, the associate director of Avery. The above image from his collection was described by the Times as "The Everard Baths on 28th Street, where gay New Yorkers met."
Posted by Grieve at 8:31 AM