An examination of hipsters 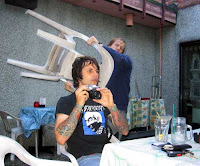 Meanwhile, in Australia, Lisa Pryor at The Sydney Morning Herald weighs in with a screed titled "How to be a bona fide hipster -- try to be different by being the same." Here are a few excerpts from the article:

Hipsters are hard to describe because they are so full of contradictions. But like a toupee or AIDS-related wasting, you know it when you see it. Hipsters hate fashion but take meticulous care achieving exactly the right degree of rumpledness. They value originality while looking the same as one another.

Thanks to these contradictions, hipsters find themselves always hurtling, psychically, towards a black hole of self-hatred, denial and irony, both intended and unintended. Ever seen someone walk into a cool bar and say "Oh my God. Look at all these try-hard wankers" not realising they look exactly the same? Classic hipster.

This week I am writing to you from the world headquarters of hipsterdom, the Brooklyn neighbourhood of Williamsburg. This slice of New York is the Haight-Ashbury of ironic self-loathing. In Verb Cafe on Bedford Avenue, a sign reads "Missing: brown felt fedora". Only four guys in the cafe are not wearing fedoras. Young men with messy hair, forearm tattoos and full beards abound. Around the corner at egg, an uncapitalised cafe, the beardage rate tops 50 per cent.

Whether they live in New York or Sydney, hipsters share many of the same qualities, particularly in the love-hate relationships they have to the hot topics of gentrification, fashion and queueing.

First, gentrification, a topic on which hipsters have passionate, confused views. They hate watching property prices rise in cool neighbourhoods partly because they do not want to see the earthy, quaint, ethnic working class displaced by white professionals with modular sofas who love painting their front doors red, but mostly because they realise they can no longer make a killing by buying cheap terraces and later flogging them off. And despite hating gentrification, they refuse to move anywhere that has not been gentrified.

whose that in the photo? James BLunt?

Hmmm...If it was Blunt, they should have used a metal chair...