All along the water towers 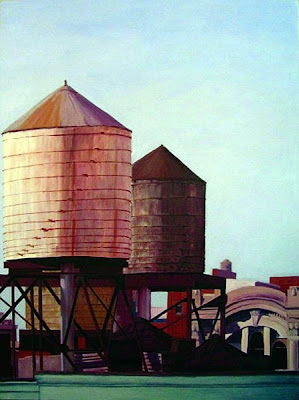 For the past two years, Gary Conger has been painting portraits of the rooftop water towers (like the one above) that he sees from his apartment. According to his Web site:

The water towers in my neighborhood (Flatiron/Madison Park) represent an older New York, a city of smaller brick buildings and rooftops that offer living and playing space as well as the hardware needed to run the building. Views of these rooftops and water towers though are being blocked by the new glass towers rising up all around us.

An exhibition of his work, titled "Vanishing New York" (Hey Jeremiah!), is now on display at BooMA, the art gallery at the public relations firm M Booth & Associates, 300 Park Ave. South at 23rd Street, 12th floor. According to the Booth site, "BooMA (with affectionate apologies to MoMA) is one of very few art collections mounted in the halls of New York City public relations firms."

Bowery Boogie has a nice post from last month on water towers. Jeremiah also has some thoughts on water towers. As he wrote, "I think of the iconic wooden water tanks as lovely anachronisms, symbols of the old New York that is rapidly vanishing."
Posted by Grieve at 7:12 AM

And I thought you had dibs on "Vanishing New York!"