"All of the Mets, Yankees and NYC resources could not duplicate what the Romans did 20 centuries ago" 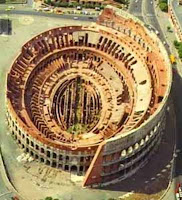 A few excerpts from EV Grieve favorite Phil Mushnick's column in today's Post. The topic: The new stadiums for the Mets and Yankees:

Who was the architect, George Costanza?

Not that anyone expected anyone to actually consider the sightlines from these seats. Those unwilling or unable to surrender their good senses to continue to attend Yankees and Mets games were deemed persona-get-outta from the start. The plans, after all, always called for fewer "cheaper" seats.

Who knew, three years ago, that such seats would be in demand among the freshly impoverished? Or that corporations, having supplanted real fans as sports' best customers, would be less solvent than both bleacher bums and bleach?

Most remarkable, though, is that in the 21st century, all of the Mets, Yankees and NYC resources could not duplicate what the Romans did 20 centuries ago. The Roman Coliseum, now 2,000 years old, never had a bad seat.

No worries, though. If Mayor Bloomberg and Yankee Vice Emperor Randy Levine are correct in their claim that new ballparks are good for the economy, we can build new ones every two years. Excelsior!