Yesterday, I did a piece on the former evangelical church/historical theater (the Bijou, then the Charles) on Avenue B that's now for rent.

An EV Grieve reader was able to get some photos inside the old theater. The reader noted that it looked as if many of the original features were still in place. 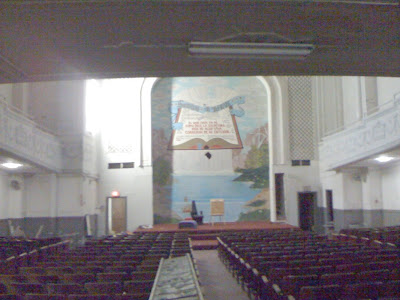 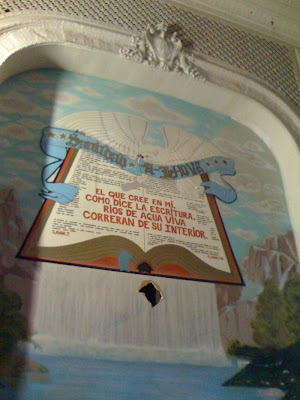 A few other observations from the reader: There's a bit of a musty smell -- likely the effects from the fire that started on the Avenue B side in October 2006. The back part, where the main theater/church is, looks to have escaped any damage.

After the theater closed, Pastor Carlos's uncle bought the building in 1975. It has been a church since then.

As the reader notes, "Pastor Carlos said he that plans to see if he can raise some funds to fix the place up and continue his church and community work. I hope he succeeds, it's really an incredible space and it would be great to see it back in use." 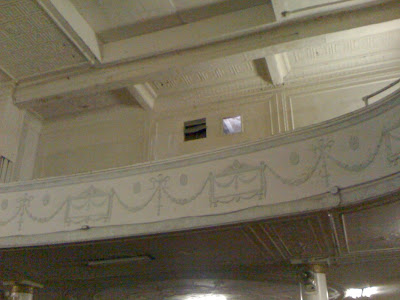 Meanwhile, the spaces for rent are roughly 1,000 square feet and 1,220 square feet. The entrances to the storefronts are on the Avenue B side. The theater entrance is on 12th Street. The reader even created a diagram of the space (not to scale):

And two shots that I took of the space... 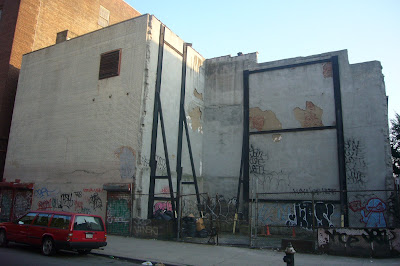 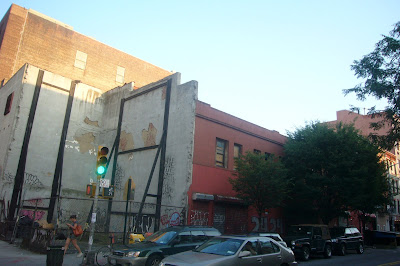 Email ThisBlogThis!Share to TwitterShare to FacebookShare to Pinterest
Labels: 193 Avenue B, Avenue B, East Village, Jonas Mekas, The Charles

your reader made that diagram? very talented. and what a great space.

The reader did make the diagram. Which was very helpful. I wasn't sure how the space was laid out...

I'm also curious about what used to be on the corner of 12th and B. The photo I posted yesterday showed a business on the corner circa 1966, but I don't know when it came down.

In the late 60s early 70s those blocks Ave B, C, D were very dangerous. Though I lived at the time on 13th between 1st & 2nd there was no way I'd walk east of Ave A. Maybe go to the library on 10th Street, that's about it. But at night time...forget it.

Beautiful, thanks.
It's a little like the story of Rev. Ike buying and preserving that theater uptown. I guess these preachers are good for something sometimes.

Wow I can't believe those photos come from inside that crappy looking building. I've tried to peek inside when they had services going on a Sunday morning, but could never see much. The building wraps around and the back door comes out on 12th Street, behind the empty lot.

Hi, I'm the reader who took the pics and made the diagram. Like Jill said, I had no idea what was really in there till I saw it and I was pretty surprised.

I had thought it would be some tiny, dingy space but there's a really cool old theater in almost entirely original condition back there. It's been painted over the years and that's about it.

The original seats are still installed, with the original upholstery and everything.

It's much bigger than I imagined too - the diagram I drew is rough but the # of seats indicated is definitely in the ballpark. 500+ for sure.

Walking in there I feel like I stepped back in time. I really hope Pastor Carlos is able to restore it and return it to something useful. If you're ever walking by and see the gates open, make sure to ask if you can go in. It's like a bug preserved in amber, a snapshot of history. I so hope it's saved.

Thanks EVG for publishing my pics. Maybe if people realize what's there they'll be motivated to assist in its preservation.

Thank YOU, anon. We all really appreciate the photos and insights...

The seats were really crappy when we went to movies there, all collapsed in. And it was dirty and since they never put all the lights on, you couldn't see any of those details in the photos. But it was a place to watch films on the cheap, even foreign flicks, saw Bergman films there.

My kids went to school at PS 61 on 12th Street, and we went to Richie's shoe store on the same block, so it was familiar turf. I only remember one incident related to the theater. A Puerto Rican man had robbed the ticketseller, and the theater owner, who was black, and a worker chased him to East 10th Street between B and C and grabbed him. But before the cops could arrive, a group of Puerto Ricans surrounded them and beat them up and took the robber away so he couldn't be arrested. There was a lot of tension between Puerto Ricans and blacks in those days.

Saw a lot of great movies there on the cheap in the 70's as double features, the range was great, from "Straw Dogs" to "Mark of the Devil". And here is some 70’s Ave B history close to the Charles that I will never forget.

"Two rookie cops shot in cold blood on Avenue B"