The summer of pink shirts

Fall is here. And maybe it couldn't have arrived at a better time. Back at the beginning of the summer, I wrote a post about a man who walked into the Mars Bar wearing a green shirt with a pink sweater wrapped around his shoulders. 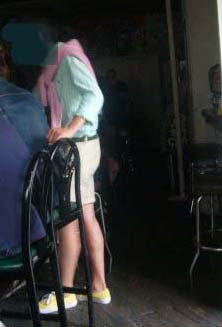 There was some mock horror on our behalf. But it seemed to represent a trend: The entire East Village was fair game to any type of interloper. In any kind of shirt. All summer long. 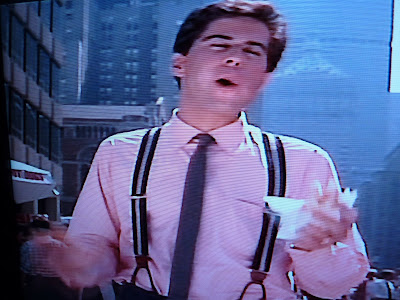 In the days that followed, I started seeing more and more men in the neighborhood wearing pink shirts.

So I kept tabs. 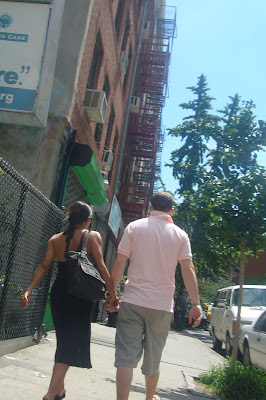 In one week, I spotted 34 men wearing pink shirts out and about -- drinking at bars, waiting in line for pizza, walking across the Bowery. 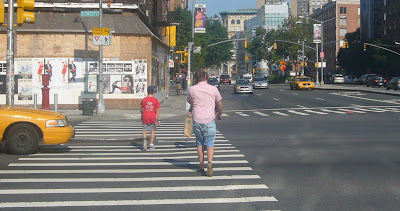 Now I don't care what anyone wears. You like pink? That's fine. 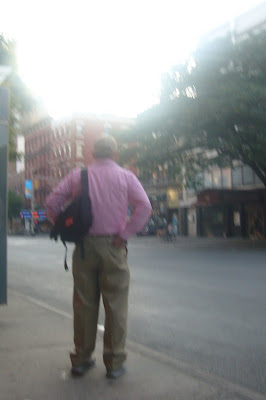 What I do mind is the sense of entitlement that seems to come with the person wearing the pink shirt. At least from the people I saw wearing them. Like, that rather serene late afternoon at Manitoba's. Suddenly, the door pops open and eight men walk in, like some kind of SWAT team on a recovery mission. The leader, wearing a pink Oxford cloth, shirt snaps his fingers and shouts to his friend, seriously, "Juke, bro." (Luckily, given the jukebox at Manitoba's, not a lot of damage can be done.) In the next 30 minutes or so during the entertaining reign of terror, the men comfortably arranged themselves around the bar, even doing a round of Irish car bombs. They didn't tip much for all the trouble.

Another night, several people were waiting in a checkout lane at Key. The woman at the cashier was having problems with her food stamps. Something was wrong with her EBT card. She looked embarrassed. And it didn't help that the fellow in line directly behind made it very clear that he was annoyed with having to wait for this, this peasant. He sighed loudly. With a theatrical swoop of his arm, he'd check his watch. And he was wearing a pink dress shirt with his jeans.

So why so many pink shirts? Perhaps the shirts are just a mere prop for the ladies. In this thoughtful listicle in the Post from the summer, we're told how to score a hookup in the Hamptons.

Advice No. 3. Wear a bright pink shirt. "It's like an aphrodisiac for women in the Hamptons." 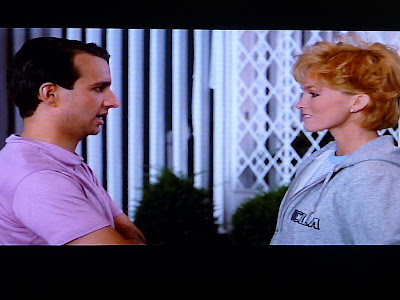 One night, I ran into a friend out and about. She was meeting a friend -- who turned up in a pink polo shirt. He was a dick. I asked him why he wore pink. He said that it showed off his tan better than a white shirt -- and that it didn't show the dirt as much. 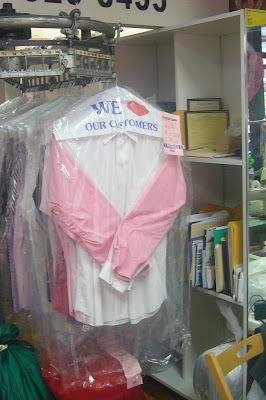 I don't have any answers. But is there someone to blame for this trend? 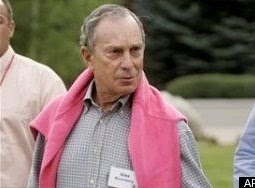 OK, I have to admit, back in the day, I used to wear a pair of pink Chuck Taylor Converse tennies, but it was with faded, ripped up jeans with hand drawn band logos all over them and a Slayer t-shirt. I figured if Dee Snider could do it and look cool, so could I.

Oops typos... Thanks for admitting this, NYCD! Very different, though! And understandable. Dee Snider!

you have an amazing, some might say "disturbing," collection of pink shirt photos. and i bet you have even more stashed away somewhere.

I own a pink shirt. It's a color. Get over it. Now if you pop the collar, on the other hand, you're invariably an indefensibly douchebag ripe for violent execution.

indefensiblE, I should say.

And having a sanctimonious air of entitlement does not come with a dress code.

Lastly, I'd like to pedantically point out that in the screen shot above (from "The Flamingo Kid), Bronson Pinchot's character is technically wearing a purple shirt, not a pink one. And as far as it being an aphrodisiac, Janet Jones' character -- if you remember the film -- thinks he's a butthead.

Pink is a flattering color and so the guy commenting on his tan is probably on to something. I do like seeing men in pink - makes me think they're secure with themselves, but maybe the ones you notice are the people who would stand out anyway just for being obnoxious.

To experiment, start walking around in a lavender shirt and see if others follow suit, so to speak...

Pink Lilac Lavender!
This is a trend for about 4 years now, traditionaly "feminine" colors in a man's wardrobe. But why do these colors seem to apeal mostly to guys that have a certain amount of arrogance and self rightiousnes? I don't get it!
Hello from Athens

I just bought a vintage PINK linen dress with a flower pocket--does this qualify????

In statistics, a spurious relationship (or, sometimes, spurious correlation or spurious regression) is a mathematical relationship in which two occurrences have no causal connection, yet it may be inferred that they do, due to a certain third, unseen factor (referred to as a "confounding factor" or "lurking variable"). The spurious relationship gives an impression of a worthy link between two groups that is invalid when objectively examined.

The last is a spurious correlation. It is therefore often said that "Correlation does not imply causation".

A lot of hip-hop guys were sporting pink a few summers ago, but that was more t-shirts and baseball caps. I thought it was fresh.

Grieve, I get it: You're talking about pink *oxford* shirts, banker dudes wearing pink shirtsleeves. Before pink it was blue. (And once long ago, it was red ties, then yellow ties.) It's a douchebag signifier. We all know it's possible to wear a pink shirt and not look like one of these jerks. It's all about the context. I also object to packs of upper-middle-class boors wearing pink oxfords or polos along with chinos and loafers being loud and jerky, whereas there's no problem with a solo dude in a pink shirt, jeans and Chucks, for example.

Bloomberg is King of the Dipshits.

I like pink, but on myself. These men..could it be too much Pinkberry™? Have their shirts become Fro Yo'd up by their mass consumption of the stuff? I'm no scientist, however I can spell the word science. And I say YES!

True Alex, re: The Flamingo Kid. I thought BP's shirt was on the pink side. Still, he was a butthead — JJ picked that up. But he was also arrogant and obnoxious. He's looked down on Matt Dillon's character, the working-class son of a Brooklyn plumber....

i'm remembering some conversation about how straight guys in pink shirts wear them in the hopes that they are sending a signal to women that says, "i am sensitive and comfortable with my feminine side," so they can get laid. it is a false message. hence: douchebag.

Last pink shirt I saw was on a guy who turned up the Polo collar while driving his BMW convertible. Prick.

I too have noticed the invasion of the pink pricks. Your observation gave me and my partner a healthy laugh since we'd been saying the very same thing all summer while rolling our eyes and waiting for fall. Real NYers wear black—all year long.

As one who loves wearing pink and lavender shirts, I say: get stabbin'.

Wow, some venom flying here. So from the posts it's safe to assume only bad hair band singers or "fresh" hip hoppers can wear pink? Some serious profiling going on. White guy in the EV wearing pink=douche. The "Juke, bro." guy would be an ass regardless of his shirt color, and the Beemer driver hater, well, you're just a hater.

I didn't say only hip-hoppers could wear pink, just pointing out that it was a big trend with those kids a few years ago. And YES, it was "fresh," meaning unexpected or unusual, to see masculine young guys appropriating a traditionally feminine color. Bankers in pink shirtsleeves just aren't visually interesting. Sorry, brah.

I just saw two pink polos outside the Holland Tunnel. Now you got me lookin'...

I don't wear pink, ever. The only man I personally know who wears a pink polo shirt is high up in Wall St and while an old friend who I love dearly, he is, indeed, a douchebag.

I was in Sophie's last Friday night because it was the only place in the neighborhood that wasn't obnoxiously crowded. At the stroke of midnight, in came a pink-checked Oxford shirt with a baby blue sweater around his shoulders and a squealing girl on his arm. They hung onto the back of my chair, shouting loudly in my ear, "OMG this place is like, SO awesome!" After ordering vodka-sodas, Pink Shirt inexplicably punched me in the arm. Even the bartender got annoyed when he tried to give them their drinks and the girl was too busy shouting into her cellphone about where on earth (OMG, we're in like some skanky part of town, you won't believe it!) they were and Pink Shirt himself couldn't be bothered to turn his head and acknowledge the presence of the bartender. After demanding his $8 about ten times, the bartender finally slammed the drinks down on the bar and walked away to serve someone else.