State of Emergency: A community meeting on Thursday evening to "Stop the Violence" 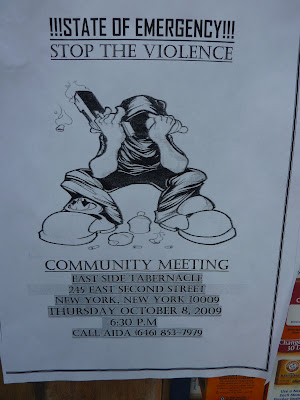 At the East Side Tabernacle Church on Second Street near Avenue C.

And in case you missed the most recent incident to make headlines, Bob Arihood had the story first about a series of BB gun attacks on Avenue D near Third Street. Three days later, the Times did a piece...who credited the Daily News for breaking the story... Police have reportedly made several arrests in the case.
Posted by Grieve at 7:05 AM

Routinely there are regular substantiated reports of real guns , the kind that fire real bullets ,being displayed , brandished and fired on avenue D .Often these fire arms are found in the hands of children .

NYPD has not as yet seen fit to post a van on avenue D because of these real guns . Yet these real guns are there all the time.These real guns occasionally wound or even kill on avenue D yet no big story is made of it .What gives with all the special attention to BB guns ,dangerous as they are ,and little mention of the real thing going BANG BANG in the night nearly weekly on avenue D.

Thanks, Bob. I was surprised by the media frenzy given this story. I believe WPIX had a breathless report on this. Dangerous, indeed. But really? Like you said, where's the mention of the real thing?

There wasn't even more follow-up on Taz's murder. It's like, "case closed, move along..." There are big issues here given little attention, such as segments of the youth population in the neighborhood not being served. The Boys Club of New York closed their Pitt Street Club in 2003. (And rumors persist that their location on 10th/A may go too. (What a valuable chunk of property for a developer...)

I didn't know there was an Avenue E.